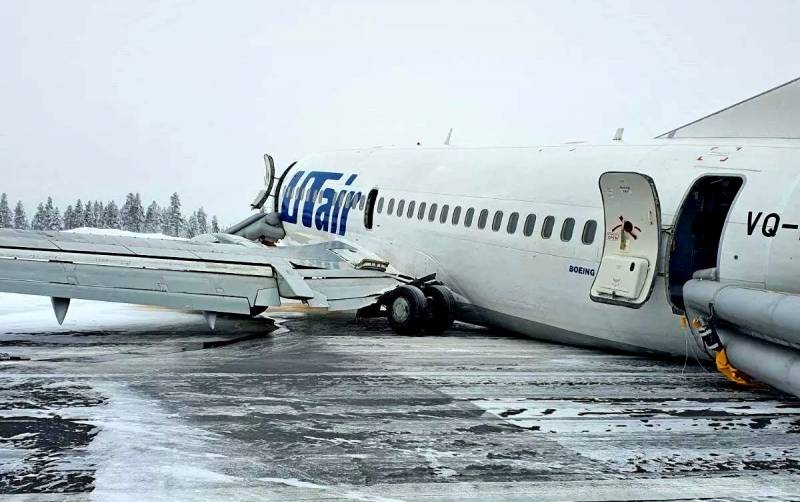 New accident with a Boeing airliner, this time what happened already in our country, it makes us return to talking about the whole complex of troubles that have been haunting one of the world's largest aircraft manufacturers for quite some time.


Evil rock dominates the corporation, which today is forced to fight fiercely not for supremacy in world markets, but for its own survival. However, what is the true reason for the failures pursuing her - in a series of adverse circumstances, as luck would have it, following one after another, or still in the problems that were created by Boeing Co itself, this is a big question.

Half a step from bankruptcy?

As it became known, the corporation, which was some other year ago one of the richest enterprises in the world, is urgently forced to look for where to "grab some money." According to informed sources, this is a huge loan of $ 10 billion, which the corporation intends to repay, at least over the next two years. Moreover, Boeing also insists on a “floating” date for granting a loan, which is necessary in order not to ruin the enterprise’s completely ruined credit history. After all, this loan will not be the first - not so long ago, the corporation was forced to go into debt by at least $ 6 billion in order to pay off the colossal compensation amounts that managed to “run over” recently. Problems with the 737 MAX that were "out of service" and not delivered to customers (currently about 400 cars stand idle in the hangars of the corporation waiting for permission to take off and send to customers), the company’s budget was a heavy burden. Only during the third quarter of 2019, Boeing's debt grew from $ 19.2 billion at the beginning of this period to an impressive amount of almost 25 billion at the end. In light of this, it is not surprising that in January of this year, Moody's Investors Service made a statement of intent to revise the credit rating of the corporation - naturally, downward. Nevertheless, the magic of a global brand with a century of history is still working - lenders who want to provide financial support to the company are likely to be found.

As far as we know, negotiations on this issue (and quite successful ones) are conducted with such “whales” of the US financial sector as Bank of America Merrill Lynch, JP Morgan, Citigroup, Wells Fargo. However, it is too early to make too optimistic forecasts. Potential lenders are unpleasantly surprised by the "appetites" of the corporation, or rather, the "hole" that they are going to "plug" with their money there today. For example, Jefferies analysts suggested that Boeing would be able to solve its current financial problems by issuing bonds in an amount half as much as the one it is now trying to attract in the form of loans. As it turned out, this is completely insufficient. At the same time, experts of the same JP Morgan suggest that the ban on the operation of the 737 MAX will "fly" into the corporation in a billion dollars every month even after their production is completely stopped. So far, there are only two examples of Boeing reaching an agreement acceptable to her regarding the payment of losses to air carriers, but it is only about American companies American Airlines and Southwest Airlines. It is unlikely that their foreign colleagues, suffering enormous financial losses due to the inability to bring this liner on the line, will show the same loyalty and understanding. The simplest example: the world-famous low-cost airline Ryanair was forced to declare that the ambitious goal set by this airline - to transport 200 million people a year, will not be achieved in 2024, as previously planned. The reason is simple: the company relied on the 737 MAX for its own head, ordering Boeing 210 cars of this brand. As a result, even those 55 aircraft that have already been delivered are chained to the ground, bringing Ryanair not losses, but only losses ...

More skeletons in the closet

Meanwhile, the date of the event, which is truly a matter of life and death for Boeing - access to flights of 737 MAX, so far not only remains a secret behind seven seals, but is increasingly shifting to a completely uncertain future. An official press release issued recently by the corporation once again emphasizes that "returning MAX to safe use" remains its "top priority" and it "will certainly happen." But it is still unknown on what Thursday and after the rain what intensity this joyful event will happen. The hottest optimists express cautious hopes that the 737 MAX will fly into the sky by the middle or end of this year. That's just reality makes negative adjustments to these dreams, almost every day. Today we are no longer talking about fixing the 737 MAX software and removing those “killer programs” that caused two terrifying disasters, as well as all other suspicious components. After one of the checks conducted not so long ago, the purpose of which was to test the function of monitoring the inclusion of liner software, the commission revealed another problem: two of the aircraft's on-board computers could not establish connections between themselves. As a result, a radical decision was made: to completely change the entire "software" to 737 MAX! It’s clear that this is not a quick matter, especially if you take into account the extremely tight control under which the development, testing and installation of new programs will take place. According to available information, part of the loan now attracted by the corporation of 10 billion should just cover the upcoming costs of this program. This time, Boeing Co does not intend to save and is going to attract the best of the best specialists to the business.

The saddest thing for the corporation is that the “cloud of cloud” of stories and shocking facts raised by numerous investigations and the media hype that accompanied them, not only does not settle down, but becomes wider and thicker, threatening to completely absorb the once brilliant business company reputation. The next black spot on her image was an extremely unpleasant situation, which “surfaced” from 2009. 11 years ago, one of the 737 series airliners owned by Turkish Airlines crashed near Amsterdam. Then “only” 9 people died and about 80 were injured. However, the main thing is not even the number of victims. In the official report, the causes of the crash were, in fact, reduced to the “critical error of the pilots”, on which they laid the main responsibility for the tragedy. However, as it turns out now, the final document was fairly “edited” by the American triumvirate, which included both representatives of the aircraft manufacturing company and the National Transport Safety Council (NTSB), as well as the Federal Office United States Civil Aviation Authority (FAA). Only today, information has been made public that the accident could have led to defects in the sensors for determining the height of the liner, because of which the machine too sharply reduced its speed during approach. Most importantly: the company again knew about possible problems with the altimeter, but considered it "below their dignity" to add additional explanations to the instructions for pilots in this regard. In the Netherlands, today there is a wave of quite natural indignation regarding this incident and its investigation. Obviously, all this does not bode well for Boeing Co.

By the way, the request for the participation of representatives of Boeing and the Federal Aviation Administration of the United States in the re-investigation of the 2009 disaster, which was received due to newly discovered circumstances, was ignored both by the corporation and the FAA. On this occasion, one of the local deputies, Jan Paternot, has already made a statement in which he emphasized that this kind of behavior "does not in any way strengthen confidence in a company that wants to be responsible only to itself." It is still unknown how further events will develop that can take an extremely interesting turn in connection with the investigation of another incident - the death of the Malaysian Boeing flight MH-17, in which the United States for some reason is showing completely inappropriate activity. Now Boeing Co has enough other problems - as they say, fresh ones, “straight away”. This is, first of all, about the incident that happened on February 5 at Istanbul Sabiha Gikcen Airport, during which another liner manufactured by this company, which had been in operation for only 11 years, not only left the runway, but fell into three parts. At the same time, 3 people died and 180 were injured. Aviation security experts commenting on this event are already beginning to point out the extremely suspicious and alarming similarity of this catastrophe both with the Boeing accident in the Netherlands that I mentioned earlier in 2009 and with the tragedy of an aircraft of the same model that followed the Bogota-San flight a year later Andreas. In all the cases described, the aircraft died during landing and disintegrated in bulk. Generally speaking, the vast majority of the 140 accidents that occurred with Boeing Corporation aircraft and cost the lives of almost 4 thousand people occurred precisely in the process of pilots trying to land the car. Such a creepy statistic ...

The extremely hard landing of the Boeing 737-524 airliner on the Moscow-Usinsk flight, which pilots managed to land without any rear landing gears, cost no casualties and injuries, solely due to the highest skill of our pilots. We will not guess for now whether the technical malfunctions of the machine will be found among the causes of this incident. This will be established by a special commission established for the investigation. Nevertheless, it can already be said that the American corporation, once the flagship and absolute leader in the aircraft industry, today is losing not only tremendous funds, but, above all, the remnants of trust on the part of both carriers and potential passengers. And blame for this is not the least of all she herself.
Ctrl Enter
Noticed oshЫbku Highlight text and press. Ctrl + Enter
We are
Boeing slaughtered: the fall of the aircraft giant continues
US Global Economy: An End That Sneaks Noticeably
Reporterin Yandex News
Read Reporterin Google News
7 comments
Information
Dear reader, to leave comments on the publication, you must sign in.