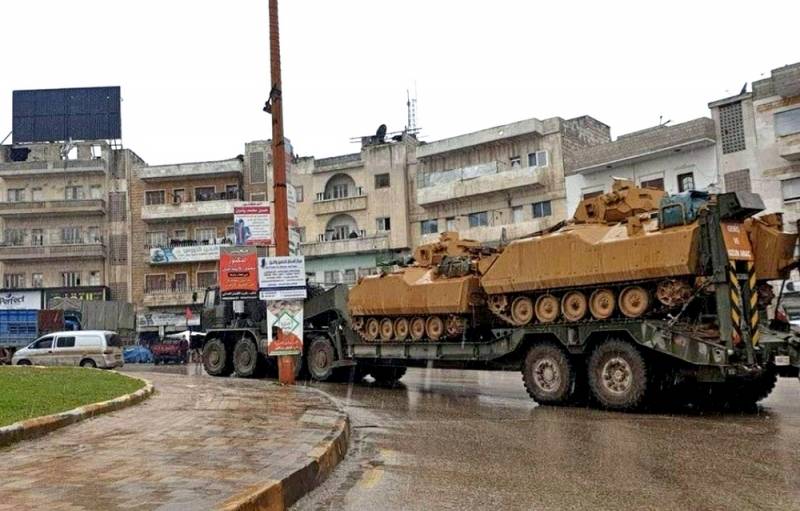 Turkey continues to increase its military presence in the border Syrian province of Idlib, introducing more and more new units there.

In this case, the exact amount equipment in the column the source of the TV channel is at a loss to report.

The revitalization of the Turkish armed forces in the northern provinces of Syria is associated with the rapid advancement of the Syrian Arab army to the last stronghold of militants.

Government units in massive blows brought down the front that the terrorists tried to keep, and continued the offensive, bypassing the Turkish roadblocks along the way.

As it became known from the message of Al Mayadeen television channel, the attack by the SAA forced the militants of the so-called “armed opposition” to organize the removal of their families to the area of ​​Afrin, located in the northern Aleppo province near the border with Turkey.

The Turkish authorities justify the movement of military equipment across the border of Syria with the need to strengthen the 12 observation posts of the Turkish army stationed there.

It is hoped that the Turkish command will have enough prudence not to engage in armed confrontation in the territory of another country.
Ctrl Enter
Noticed oshЫbku Highlight text and press. Ctrl + Enter
We are
Syrian troops show militants in Idlib ultimatum
A column of 40 units of Turkish armored vehicles crossed the border of Syria
Reporterin Yandex News
Read Reporterin Google News
Ad
The publication is looking for authors in the news and analytical departments. Requirements for applicants: literacy, responsibility, efficiency, inexhaustible creative energy, experience in copywriting or journalism, the ability to quickly analyze text and check facts, write concisely and interestingly on political and economic topics. The work is paid. Contact: [email protected]
5 comments
Information
Dear reader, to leave comments on the publication, you must to register.
I have an account? Sign in