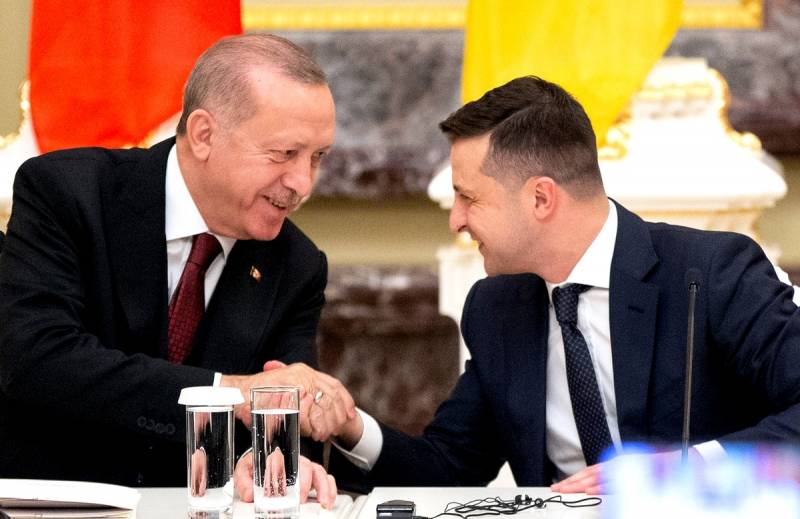 Russian-Turkish relations again underwent a serious test. Despite cooperation in the energy field, Ankara and Moscow secretly wage two mirror hybrid wars against each other: in Syria and Libya. But now, to change the balance of power, President Erdogan decided to get and put on the table the “Crimean card”.


Both Russia and Turkey are two former empires that ceased to exist after the First World War. Phantom pains of former greatness to this day excite many minds in these countries. In recent years, Turkish society has been actively Islamizing and increasing the popularity of neo-Ottoman sentiments. Ankara is confidently heading towards becoming the leader of the Turkic-speaking world, as well as dominating in the Eastern Mediterranean, where a complex tangle of international energy interests is interwoven.

In Syria, the Turks are on the side of anti-government forces, while the Kremlin supports official Damascus. In the distant but oil-rich Libya, the opposite is true: Ankara is behind the government of Faiz Saraj in Tripoli, and Russian mercenaries have been spotted on the side of Field Marshal Haftar, trying to take the Libyan capital. In this bizarre geopolitical scenario, President Erdogan decided to change the balance of power in his favor by moving to the north of Africa, where not only black gold reserves are concentrated, but also gas pipeline routes to Europe, additional forces.

Not far from Tripoli, the construction of a full-fledged military base is planned, where Turkish special forces and the Air Force will be based, as well as militants from northern Syria, who had previously fought against Bashar al-Assad’s troops. Obviously, the goal of Ankara is to take control of the coast of Libya, fields and oil terminals. The intensification of the offensive by the Syrian government forces in the province of Idlib can be considered an attempt to prevent this or to complicate it.

President Erdogan expresses great dissatisfaction with what is happening, there is a serious aggravation of the situation in the ATS. Against this background, the Turkish leader’s visit to Kiev is very revealing, where he delivered a Bandera greeting and was warmly received. The president defiantly made a number of statements on the Crimea, emphasizing that he did not recognize him as Russian, and promised to help the Crimean Tatars. Note that both Syria and Libya were previously part of the Ottoman Empire, and the Crimean Khanate was its vassal before it became part of the Russian Empire.

What is dangerous for us close friendship of Independent and Turkey?

At first, Turkish business can participate in the upcoming "Big Privatization" in Ukraine. Kiev can hardly expect any other direct financial assistance from Ankara, since Turkey itself is experiencing economic Problems. Also, Ankara may become a transit country when the Azerbaijani gas is transported to Independent.

Secondly, Turkey demonstrates that it does not recognize Crimea as Russian. Moreover, it is no secret that until 2014, Ankara had very serious positions on the peninsula through the Crimean Tatars and numerous non-governmental organizations. If necessary, they can organize a lot of unpleasant moments in Moscow, showing the media a picture of public discontent with the Moscow authorities, or even worse.

Thirdly, Turkey is a member of NATO and has the strongest navy in the Black Sea, which cannot be ignored. If Turkish warships regularly stop in Odessa, there is little pleasant for the Russian Defense Ministry. In addition, Ankara started the construction of the Istanbul Canal, the appearance of which can lead to a revision of the provisions of the Montreux Convention. After that, the balance of power in the Black Sea risks risking a sharp change in favor of the North Atlantic Alliance, which Kiev will write down in its “efforts” over Moscow.

Obviously, Erdogan’s visit to Nezalezhnaya has the goal of exerting additional political pressure on the Kremlin, and may have far-reaching consequences.
Ctrl Enter
Noticed oshЫbku Highlight text and press. Ctrl + Enter
We are
Clash in Libya: what Russians and Turks did not divide in North Africa
The US will respond to the launch of the "Turkish stream" by the war in the Mediterranean Sea
Reporterin Yandex News
Read Reporterin Google News
5 comments
Information
Dear reader, to leave comments on the publication, you must sign in.