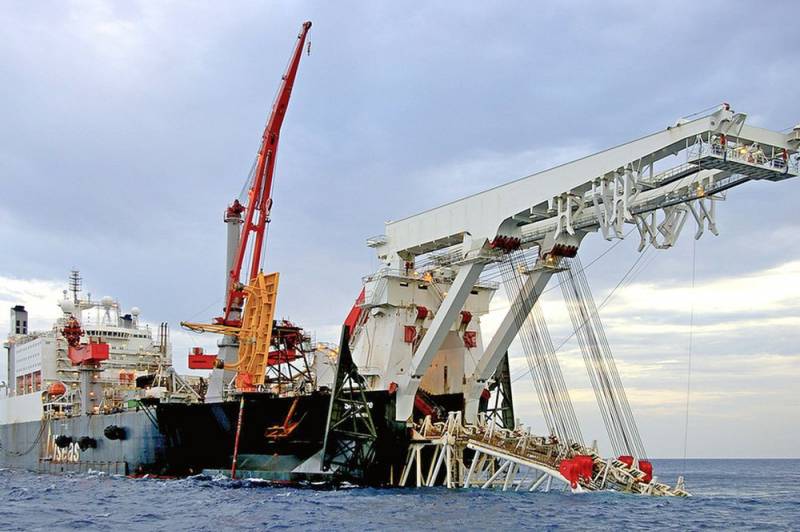 Handelsblatt, Germany's pro-American daily business newspaper, founded in 1946 and working with Dow Jones, has warned its readers that Washington intends to introduce new sanctions (restrictions) against gas pipeline Nord Stream-2. Sources told the publication that this would happen if Moscow decides to complete the pipeline.


It is clarified that the sanctions may cover not only European investors who are directly involved in the implementation of the project, or companies that help construction, as well as those companies and businessmen who will buy gas if it goes through this pipeline. Moreover, the next portion of sanctions may be introduced in February-March 2020.

It should be noted that the Senator from the US Democratic Party, a member of the Foreign Affairs Committee, Ben Cardin has already commented on this information. Cardin is an adversary of Nord Stream 2. However, regarding the sanctions, the senator is “not sure about this”, as he doubts the possibility of their introduction. At the same time, he called the Nord Stream-2 a mistake. Cardin supports those who believe that the construction of the Nord Stream 2 gas pipeline is "the wrong course for democracy."

Russia also commented on the above information. For example, an expert of the National Energy Security Fund (NESF - a private analytical company) Igor Yushkov told the newspaper "Sight"that if Washington introduces a new sanctions package against Nord Stream-2, this will mean that the United States decided to directly economic war with Europe and Russia.

Yushkov emphasized that before that, the Americans did not dare to impose sanctions on PJSC Gazprom, as this would directly hurt the interests of Germany, Austria and several other European countries. After all, these countries are long-standing buyers of Russian gas. So, when the United States introduced the first sanctions against Nord Stream 2019 in December 2, it was clear that they could only touch one company - the Swiss Allseas, which owns the pipe-laying vessels. New sanctions will mean that Americans shut off Europeans' access to Russian gas.

The expert drew attention to the fact that PJSC Gazprom supplies about 200 billion cubic meters to Europe. m of gas per year. This is almost a third of all gas imported by Europeans. At the same time, PJSC Gazprom may lose export revenues of $ 7- $ 11 billion. Therefore, if the United States decides to take this aggressive step towards Europe and Russia, then Washington may have serious complications.

Tracking where the European consumer got the gas from will not be easy. The contract with Gazprom usually prescribes only a gas delivery and acceptance point, for example, in the Austrian Baumgarten hub. Ownership passes from Gazprom to the buyer here. The buyer does not concern gas delivery at all. Therefore, the big question is how Americans will prove that this or that European received this gas from Nord Stream-2.
- explained the expert.

Why will the Americans fine European buyers? It turns out that they, in principle, buy gas from Gazprom. The US will punish Russia as the wrong supplier
- added the expert.

It must be recalled that the specified Baumgarten receives gas from various sources. Therefore, forcing Europeans to buy gas exclusively “from NATO partners” or NATO allies is absolutely not realistic. Therefore, the European Union is unlikely to accept such sanctions, and even from its competitor. So, maybe now the Americans are just probing the soil.
Ctrl Enter
Noticed oshЫbku Highlight text and press. Ctrl + Enter
We are
Russia may increase gas pumping to Europe bypassing Ukraine: the method is named
US preparing to withdraw from Open Skies Treaty
Reporterin Yandex News
Read Reporterin Google News
13 comments
Information
Dear reader, to leave comments on the publication, you must sign in.