Coronavirus will not kill mankind, but the global economy can 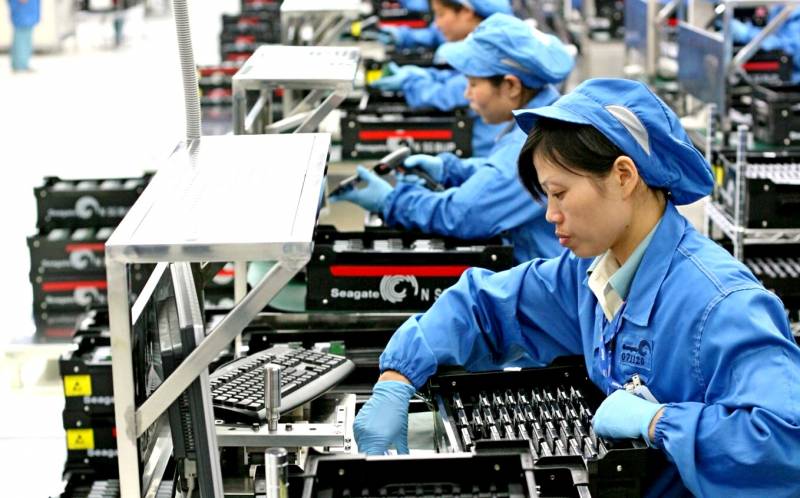 While the World Health Organization can not decide on whether the outbreak of a deadly infection that hit China will turn into a global pandemic that threatens the entire population of the planet, world rating agencies, exchange and financial analysts are already issuing forecasts one gloomier than the other. A reliable cure for coronavirus, most likely, will still be found, but whether it will be possible to "pump" the world the economy, in front of my eyes falling into a coma precisely because of the problems associated with the spread of this disease - a big question.


The most unpleasant thing is that the current unforeseen situation seems to have become only the last straw, a catalyst for the negative processes that have accumulated over the years to become widespread, threatening us all with a new “Great Depression”, if not something worse.

Messages coming these days from all over the planet are increasingly beginning to resemble either front-line reports, or chronicles of the global catastrophe. So far - economic. The Civil Aviation Administration of China reports that flights to this country have already stopped 46 (at the time of writing of the article) airlines in the world. Demand in the international aviation market has fallen sharply, winged cars are idle, chained to the ground by human fear, carriers suffer huge losses. One of the world's largest automakers, Hyundai Motor, has announced the complete suspension of 7 of its enterprises located in South Korea. This is more than a third of all production capacities of the concern, which last year accounted for almost half of its products. The reason is extremely simple - the absence of badly needed spare parts that plants received from China. While it comes to closing them for a week, but no one undertakes to make accurate forecasts. Taken on our heads, it’s not known where the 2019-nCoV virus hits the most seemingly unexpected “pain points”. So, the most serious losses are incurred by French and British manufacturers of elite alcohol, sending from 10% to 20% of their own products to the Celestial Empire. New Year's holidays in this country have always brought huge profits to producers of alcohol from Europe, but not this year. What kind of entertainment is there ?! In the Macao Chinese Special Administrative Region, all casinos and other gambling establishments will be closed by a special decision for two weeks.

Something similar happens the second time in the history of this largest world center of excitement (the revenue of the local casinos exceeds the income of the entire similar Las Vegas industry by six times!), And the last time, in 2018, because of the approaching typhoon, the roulette wheels stopped only at 33 hours The current two-week downtime will cost Macau half the quarterly profit, at least.

In our country, the decision of the Prime Minister Mikhail Mishustin postponed the annual Russian Investment Forum in Sochi, which was supposed to be held on February 12-14. According to government officials, of the 4 people who have already registered to participate in it, 500 are foreign guests, half of whom intended to come from those countries where coronavirus is already spreading.

But in faraway Brazil, the country's authorities showed either unprecedented courage, or unheard of frivolity - they decided not to cancel their world-famous carnival in Rio de Janeiro. Representatives of the local Ministry of Health said that they see no reason to abandon the "cultural event that shapes national identity." Add - and bringing huge revenues to the budget of the country, where tourists come from all over the planet on this occasion. It is understandable - the incendiary dances of dark-skinned beauties - this is not talk of boring economic matters, incomprehensible to anyone but a narrow circle of initiates. However, in Brazil there really are no confirmed cases of 2019-nCoV infection yet.

World rating agencies, such as the reputable Moody's, today call the outbreak of infection in China a "black swan" of incredible proportions. Let me remind you - economists gave such an eerie name to those phenomena that have global consequences (usually negative), the occurrence of which no one could have expected and anticipated. Nevertheless, forecasts of impending troubles of a global level have been voiced for many years now, only few people wanted to listen to these ominous prophecies. A year ago, the Organization for Economic Co-operation and Development (OECD) sounded the alarm - according to its estimates, global flows of foreign direct investment in 2018 collapsed worldwide by 27% - to $ 1,097 trillion. This impressive figure was 1,3% of global GDP, but its rate has been minimal since 1999. Also, last year, the International Monetary Fund received a warning about a financial crisis looming over the European Union, the most probable reasons for which the organization called trade protectionism, “chaotic Brexit”, as well as geopolitical conflicts plaguing the world, strengthening in the world economy. Already this year, IMF Managing Director Kristalina Georgieva, during her speech at the Peterson Institute for World Economy, made an even more categorical statement. Her colleagues in the organization are convinced that not just another new crisis awaits us all, but a real economic cataclysm on the scale of the ever-memorable Great Depression of the 20s.

As the reasons for this situation, IMF analysts called not only the instability of the global financial system, but also a situation in which "the gap between the richest and poorest layers in most developed countries of the planet has reached or is close to a record." Much can be added to this: the "trade war" between the United States and China, another crisis in the Middle East and a host of other things that did not contribute at all to the stability and prosperity of the world economy. And now - the coronavirus ... According to Moody's Analytics forecasts, if the epidemic cannot be quickly and efficiently curbed, the consequences will be much more devastating than the mortgage bubble that burst in the USA in 2008 and collapsed in global financial markets. The agency claims: everything is much more serious, because now industrial indices, which are clear indicators of global economic “health,” have gone down. This is, first of all, about a sharp drop in prices for industrial metals and the Baltic Dry index, which shows the demand for industrial cargo turnover. The latter has fallen by half since the beginning of the year, and by five times compared to September 2019. It is losing its price in gold, oil is rapidly becoming cheaper - the signs of a catastrophe are becoming more apparent. Bloomberg decided to try to build a forecast, starting from an intrusively obvious analogy - the SARS epidemic in 2003, and just grabbed your head! Then the epidemic cost the Celestial Empire two percentage points of the quarterly rate of its economic growth, however, with subsequent rapid recovery. The remaining countries, especially those not neighboring China, were not particularly affected. But in 2003, Chinese GDP accounted for 4% of the world, and now - 17%! And now this is extremely serious.

Is Russia worth worrying? And how!

To more clearly illustrate how Chinese problems are affecting the economy of the whole world, and our country in particular, let us consider the situation in the sector most significant for Russia - energy exports. Demand for oil from one of its main world importers - China, fell by 3 million barrels per day, which makes up 20% of the country's total demand for “black gold”. 18 oil refineries in the country, if they did not completely stop work, then seriously reduced its volumes. The result was not slow in affecting world prices: on Monday, Brent lost 0.9%, dropping to 56.07 dollars per barrel. Futures on "black gold" fell to an annual minimum, and yet, as they say, "it is not yet evening" ... Some energy market analysts believe that the first month of this year has become the worst for them over the past three decades. Sensing the approach of more than serious problems, representatives of OPEC + countries forgot about their intentions to meet to discuss the oil situation in March and are preparing an emergency meeting for the coming weeks, if not days. First, most likely, there will be a meeting of the JTC - the Joint Technical Committee, which will include specialized experts from interested states, and then a ministerial meeting, at which a strategy should be developed to save prices for "black gold", which are now rapidly rolling under slope. According to the information currently available, the Minister of Energy of Russia Alexander Novak confirmed the complete readiness of our country to participate in general measures to resolve the oil market.

This is quite reasonable when you consider that the Russian Ministry of Finance has included in the state budget the price of a barrel of Urals at 57.7 dollars. Unfortunately, stock quotes have already approached this mark at a frighteningly close distance. It is possible that at the next OPEC + summit we will talk about a very significant reduction in oil production - up to half a million barrels per day. Well, this will probably be a lesser evil. It’s better to go for a temporary reduction in the revenues of our energy sector than to again experience a “collapse”, similar to what happened in the 80s of the last century. Beijing’s iron resolve is also inspiring some optimism precisely with the destructive economic consequences of the epidemic, saving the national economy of its own country at all costs, and, indirectly, the rest of the world. As it became known, the Central Bank of China only in the near future intends to invest about 173 billion dollars in the state’s economy precisely in order “to protect it from the effects of the outbreak of coronavirus,” the official statement said. The China Development Bank is also planning an urgent issue of special debt bonds worth $ 2 billion, the proceeds from the implementation of which will be used to combat the epidemic and its consequences. In a word, the Celestial Empire is fighting and does not intend to give up. Her speedy victory over an ominous disease today is in the interests, without exaggeration, of all mankind. Although ... What is extremely interesting, in the United States for some reason the mustache is not blowing about what is happening. The White House’s chief economic adviser, Larry Kudlow, even makes a joke about it: they say, “the world is not Wuhan,” and the impact of the epidemic on the US economy will be “minimal.” According to Kudlow, coronavirus "could cost her 0.2% in the first quarter and possibly the same amount afterwards."

This optimism, shown at a time when the rest of the world froze in the most disturbing forebodings, in truth, leads to very definite thoughts and even suspicions. Is it true that those who believe that things could not have done without American participation in the birth of the current “black swan” with the 2019-nCoV index?
Ctrl Enter
Noticed oshЫbku Highlight text and press. Ctrl + Enter
We are
Peace enforcement operation. Russia inflicts a preemptive strike on Kiev
“The dark August night came the one whom the Ukrainians were waiting with horror”
Reporterin Yandex News
Read Reporterin Google News
3 comments
Information
Dear reader, to leave comments on the publication, you must sign in.