“Demanding is useless”: Satanovsky ridiculed the claims of a dozen countries against Russia 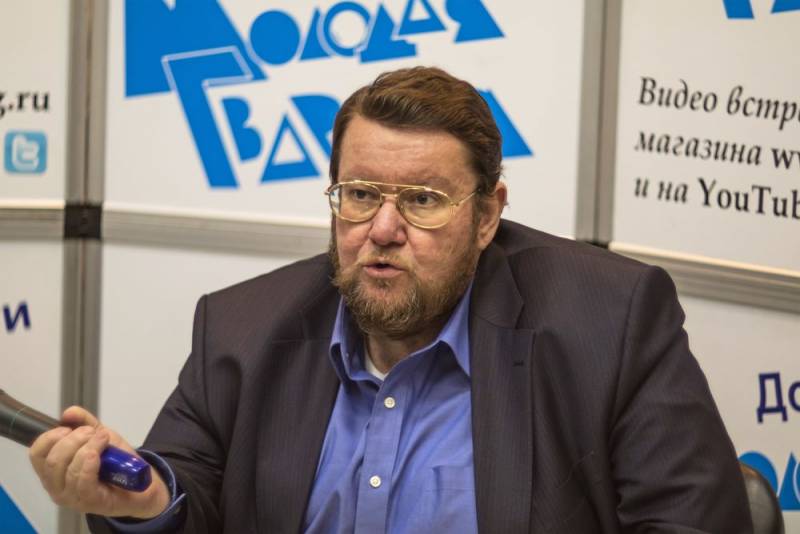 The famous Russian political scientist, oriental scientist and economist, founder and president of the Institute of the Middle East research center Evgeny Satanovsky ridiculed the “Wishlist” (requirements) of Russophobes for Russia. The list of countries, organizations and individuals who have any complaints, he published in his Armageddonych Telegram channel

PACE demanded that Russia return Crimea to Ukraine. Poland demanded money. Estonia and Latvia - return transit through their ports. Lithuania and Poland, taking offense at the fact that Moscow opens archives, do not bother them with the Holocaust. Turkey - leave alone the terrorists in Idlib and stop her, Turkey, from interfering in Libya. And in Syria
- Satanovsky wrote.

Satanovsky specified that psychiatry is well developed in Russia, but he cannot understand some aspects of what is happening. Why does Washington demand that Moscow not interfere in the US elections, that the Russians provide free access to the Northern Sea Route and do not interfere with the sale of American LNG to Europe.

Satanovsky drew attention to the fact that Georgia is demanding back South Ossetia and Abkhazia, that Ukraine "does not count at all" how much it requires. Starting with the desire to "spread rot Donbass," to "so that the Muscovites fell through the ground." Satanovsky also did not forget about regular blackmail from Minsk, about the desire of the “father” to continue the “banquet”, playing out the Union State card.

Britain demands, she herself does not know what, with the Skripals. Sweden, so that Moscow does not offend Poland, Ukraine and the Baltic states, and that Russian submarines do not go through it, Sweden, territorial waters. And it’s not that she caught them by the periscopes, but she suspects that there are more of them than the Baltic herring. Why is nervous. Denmark needs something with Russian gas pipeline
- said Satanovsky.

Satanovsky recalled Greta Tunberg about a non-attending school. According to Satanovsky, in the absence of the Gulf Stream and in the presence of domestic weather - “we must not understand anything much about it” in order to call for what the eco-activist is calling for. At the same time, all beggars unceremoniously beg for money and insist on reciprocity.

Weird people. We only split for love. And for reciprocity. And for the money. As old as the world. Demanding Russia is useless. And even harmful. Maybe it’s their historical?
- considers Satanovsky.

So would they not all go where they usually send in our country? That, given the current tolerance towards sexual minorities, sounds more than relevant and can very well be regarded as well-wishes and a high compliment. Have a good trip to you all, brothers and sisters!
- summed up Satanovsky.

I must add that recently from Warsaw stated about the "unconditional right" to demand reparation from Russia. Well, and we, in turn, want to remind you that only surrender can be unconditional and in the last world war Russia was the winner.
Ctrl Enter
Noticed oshЫbku Highlight text and press. Ctrl + Enter
We are
Satanovsky about pensions in 150 thousand rubles: We were all deceived!
PACE: Russophobes remained in the minority
Reporterin Yandex News
Read Reporterin Google News
7 comments
Information
Dear reader, to leave comments on the publication, you must sign in.