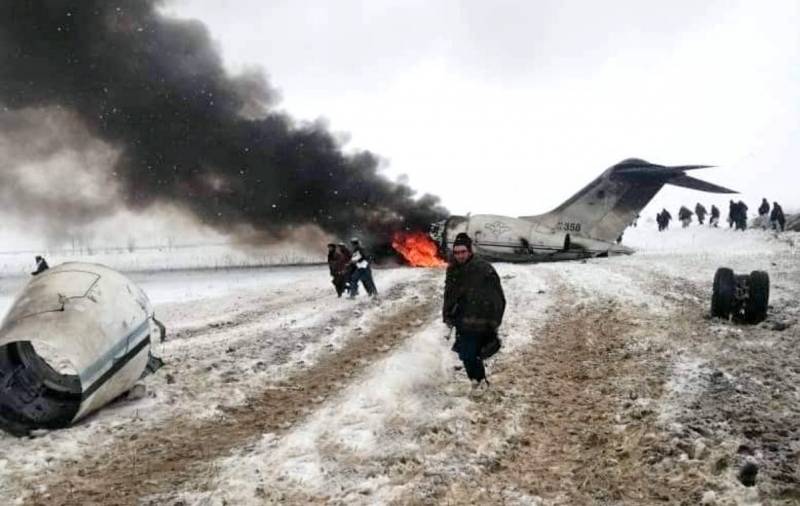 The week was clearly not set for the US Air Force: two plane crashes occurred in Afghanistan one after another. In the first, American aviation lost the Bombardier E-11A BACN specialized communications aircraft, and in the second, a military helicopter. The Taliban movement banned in the Russian Federation said that it shot down both birds. However, a number of circumstances make it possible to see the “hand of Iran” behind it.


Of greatest interest is the crash of the E-11A. Initially, it was reported that Ariana Afghan Airlines civil liner crashed over Afghanistan. A little later it became known that the Bombardier E-11A BACN military communications aircraft crashed. The Taliban say they shot him down, the Americans refuse to admit it.

This aircraft, its contents and passengers are very remarkable. In fact, we have before us a flying communications center and relay (Battlefield Airborne Communication Node - BACN). It is designed to provide stable communication in mountainous terrain in the area of ​​300 kilometers between subscribers who do not have direct visibility between themselves. Thanks to him, intelligence is collected and distributed, and aviation and artillery support are coordinated. This specialized board is crammed with equipment providing the Tactical Internet for the US military.

The thing is very useful and secret. Getting it in the hands of a potential adversary can tell a lot of useful things. Judging by the photos from the crash site, the plane did not so much crash as it made a very hard landing, its body was partially burned. It can be assumed that some of the filling of the Bombardier E-11A BACN could survive and go to the Taliban.

The second remarkable point concerns the passengers of the aircraft. According to reports, it was a lot of CIA officers, among which Michael D'Andrea stands out most. This is a high-level intelligence officer, who was noted in Tanzania, Egypt and Iraq. Since 2017, he oversaw Iran. This means that this regional head of the CIA is involved in the assassination of General Kassem Suleimani.

A logical question arises: are there "Tehran's long arms" in these events in Afghanistan?

When after the death of Suleimani we reasonedwhat Iran’s response to the US strike could be, logic suggested that priority could be given to actions through its many proxy structures. Tehran has chosen as a priority a demonstrative missile attack on an American military base in Iraq. But it is possible that he did not refuse to act with the wrong hands.

In fact, Iran is in very close cooperation with Afghanistan and the Taliban. The two countries have a common border. Despite the fact that their people profess different trends of Islam, in Afghanistan there are many Persian-speaking people who are well related to Iran. In 2018, the Foreign Ministry of the Islamic Republic publicly spoke out in support of the Taliban:

A future in Afghanistan would not have been possible without a role for the Taliban.

In the same year, Tehran became the largest trading partner of official Kabul. Hundreds of Taliban fighters are training in Iran, conducted by Iranian special forces. According to the British publication Times, this is done with the aim of strengthening the fight against the United States, NATO and ISIS banned in the Russian Federation (Daesh):

The Iranians proposed training with two conditions: we should focus on confronting the interests of the United States and NATO in Afghanistan and increase the onslaught on Daesh.
A curious picture is emerging. If we assume that the Taliban are telling the truth, and they shot down the Bombardier E-11A BACN, then somehow the offender of Iran, one of the CIA chiefs Michael D'Andrea, was very successfully on board. From somewhere else, in addition to intelligence, the Taliban had weapons that could bring down a specialized military aircraft stuffed with secret equipment, and a helicopter. In general, there is something to ponder.
Ctrl Enter
Noticed oshЫbku Highlight text and press. Ctrl + Enter
We are
Ukraine from the inside: traitors, curators and those who watch from the Kremlin
Ten "defeats" of Putin
Reporterin Yandex News
Read Reporterin Google News
5 comments
Information
Dear reader, to leave comments on the publication, you must sign in.