“Respectful gesture”: the web discusses footage of how Putin helped the Palestinian guard 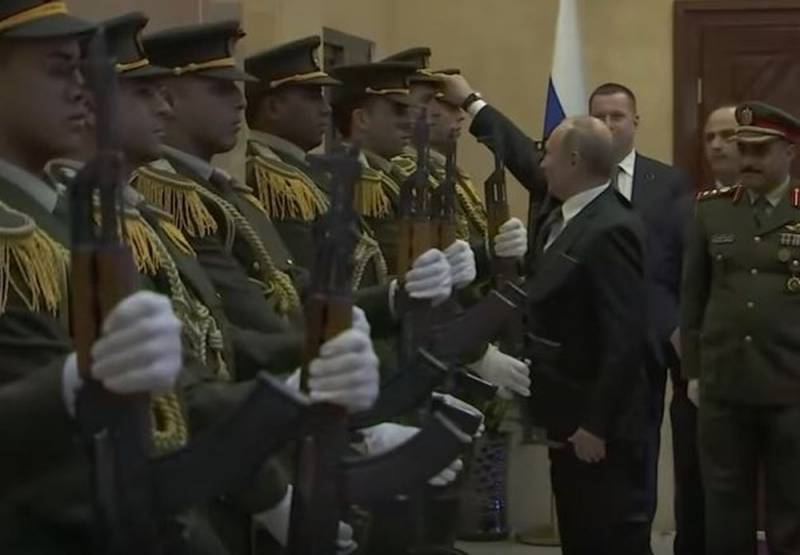 On January 23, 2020, Russian leader Vladimir Putin arrived in Bethlehem to negotiate with Palestinian President Mahmoud Abbas. At the residence of the Palestinian leader, Putin was waiting for a gala reception with the participation of an honor guard.


As the presidents of Russia and Palestine walked along the line of lines, a cap fell off a Palestinian military. The soldier stood at attention in front of the passing heads of state, so at that moment he could not raise his cap. Putin passing by drew attention to this and bent down to pick up his cap from the floor, after which he put it on the head of a Palestinian soldier. At the same time, Putin smiled and made a gesture around him to understand that everything was fine by lifting his thumb up.

The video of this episode was made by the personal photographer of the Palestinian President Muhammad Atik. After that, he posted this video on his Facebook, signed it:

Naturally, journalist readers and web users who were interested in the visit turned their attention to what had happened. They expressed admiration to Putin, and the Palestinians wrote that they were glad to see such a man on their land.

Reader Eyad Abu Ali wished Putin good health, and Naser Ali Agag expressed respect to the Russian leader. By the way, the expressions “Welcome”, “respect for you” were used in a large number of comments.


It should be added that in the process of communication, Putin officially invited Abbas to Moscow to celebrate the 75th anniversary of the Victory over Nazism, which should be held on May 9, 2020.
Ctrl Enter
Noticed oshЫbku Highlight text and press. Ctrl + Enter
We are
Ukrainian general: the attack on the Donbass will result in huge losses
Details of the "deal of the century" of the USA in the Middle East
Reporterin Yandex News
Read Reporterin Google News
2 comments
Information
Dear reader, to leave comments on the publication, you must sign in.