The Pentagon admitted the obvious: B-52 is not suitable for war with Russia 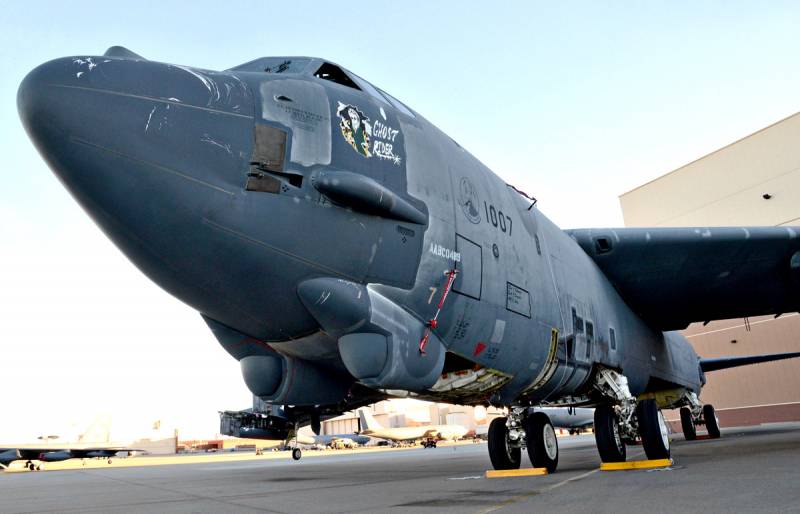 The US Air Force took a very significant step. The concept of using the B-52H Stratofortress bomber has been completely revised. From the arsenal of the "strategist", free-falling thermonuclear bombs have now been removed. Instead, the veteran will have only ALCM air-to-ground cruise missiles. This event can be considered a sign of the crisis of the US nuclear triad, the effectiveness of one of the components of which is recognized as doubtful.


The Pentagon finally recognized the obvious. B-52H Stratofortress was created for the war with the USSR of 1948, but against the modern enemy in the person of the Russian Federation, the previous methods will not work. In those years, “flying fortresses” were supposed to fly across the ocean and drop nuclear bombs on the territory of the Soviet Union, after which they returned safely home. Bombers were designed for the longest flight at high altitude. They were protected from fighter attacks by four machine guns, which were subsequently replaced by an automatic gun.

“Strategists” turned out to be strong aircraft and survived to this day with several modernizations. After the collapse of the USSR, they managed to bomb Yugoslavia and the Middle East, however, without using a nuclear arsenal. However, against an adversary with a modern air defense / missile defense system, their use will be akin to suicide.

Indeed, flying up to some large Russian city and dropping a nuclear bomb on it with a parachute so that it could then calmly fly away from the drop point is simply unrealistic. B-52H Stratofortress are perfectly visible on the radars of the S-300 and S-400 systems, and are also reachable for their anti-aircraft missiles. The revision of the concept of the use of “Stratospheric Fortresses” only confirms this.

Nevertheless, the United States does not intend to abandon the use of nuclear bombs freely falling on parachutes. Currently, the Pentagon is working on their modification of the B-61 - B61-12, which will autonomously plan, steering, if necessary, many kilometers, when dropped from a great height. What is Washington counting on?

According to the plans of the White House, the 12th generation nuclear bombs should appear in Europe: Germany, Italy, Belgium, the Netherlands and Turkey. F-15 and F-16, the newest F-35, as well as Tornado fighter-bombers of the German and British air forces are supposed to be carriers. In addition, a thermonuclear bomb may appear on airplanes with technology "Stealth" B-2, B-1 Lancer, as well as the promising strategic heavy bomber B-21 Raider.

Against whom they can be applied, does not require a separate explanation. All these masterpieces of American aircraft construction, which are impressive in appearance and cost, are the result of an arms race with the Russian S-300, S-400 systems and the promising S-500. But there are good news. Thanks to the development of the domestic missile defense / air defense system, these stealth aircraft are not so invisible.

So, the Voronezh over-the-horizon long-range radar will see not only the enemy’s launched missiles, but also its aviation. Over-the-horizon 29B6 “Container” has an even larger viewing angle and is capable of simultaneously leading thousands of flying objects. One such station is already in the western direction, soon the same will cover Russia from the east, south and northwest.

The presence of such technologies in the Russian Defense Ministry turns the extremely expensive American stealth bombers into a curiosity that is more suitable for corporations to use the military budget.
Ctrl Enter
Noticed oshЫbku Highlight text and press. Ctrl + Enter
We are
Russia versus the USA: spaceships in the near future
Winged "Baikal": what should be a reusable launch vehicle
Reporterin Yandex News
Read Reporterin Google News
5 comments
Information
Dear reader, to leave comments on the publication, you must to register.
I have an account? Sign in