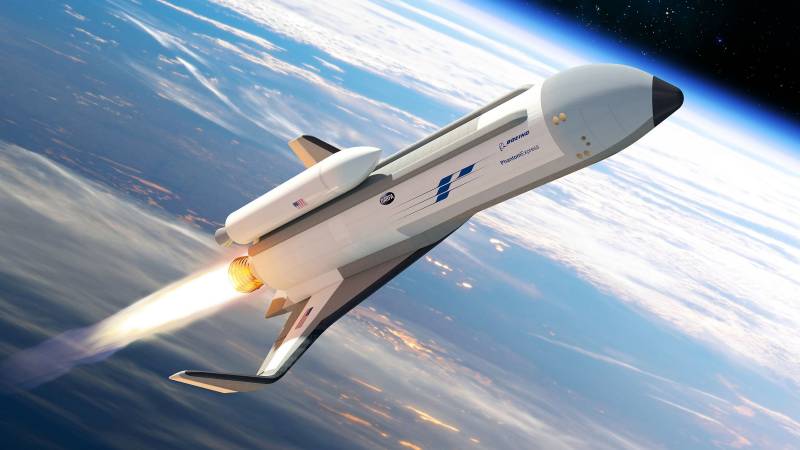 Boeing will not be engaged in the development of the reusable space plan of the Phantom Express project for putting small satellites into orbit. The concern's withdrawal from the XPS program was announced in DARPA.


Work on the creation of a space plan that could launch small satellites into orbit, and then independently return to the airfield, started in 2013. Then DARPA announced the launch of a program called XS-1 (later renamed XSP), the purpose of which was to develop a reusable transport system for frequent and relatively cheap orbits of small vehicles.

As the initial parameters, the Office of Promising Research Projects designated: the launch cost is about $ 5 million, the speed is up to 10 Mach numbers and the payload weight is from 1,4 tons. At the same time, the spaceplane had to provide 10 launches within 10 days without any serious maintenance during this period.

In 2017, a contract for the development of a promising device went to Boeing and Aerojet Rocketdyne. The project proposed by the aviation giant was called Phantom Express and meant the creation of a reusable space plan equipped with a consumable second stage. The latter was supposed to separate from the device a few minutes after launch and put the payload into orbit. In turn, the spaceplane was supposed to return to the airfield in airplane mode.

In 2018, Aerojet Rocketdyne tested the AR-22 engine, which DARPA called the key achievement of the program. The unit for 10 days made 10 static jumps from 100 seconds. At the end of that year, Boeing began work on the creation of the first flight model.

However, on the eve it became known that the aviation giant was leaving the program. DARPA said that this happened after a detailed analysis of the project.
Ctrl Enter
Noticed oshЫbku Highlight text and press. Ctrl + Enter
We are
Civil hypersound: in Russia create a new spaceplane
China and the United States will share space without Russia
Reporterin Yandex News
Read Reporterin Google News
Ad
The publication is looking for authors in the news and analytical departments. Requirements for applicants: literacy, responsibility, efficiency, inexhaustible creative energy, experience in copywriting or journalism, the ability to quickly analyze text and check facts, write concisely and interestingly on political and economic topics. The work is paid. Contact: [email protected]
Information
Dear reader, to leave comments on the publication, you must to register.
I have an account? Sign in