Get it done in 100 seconds: what Putin wants to talk about with world leaders 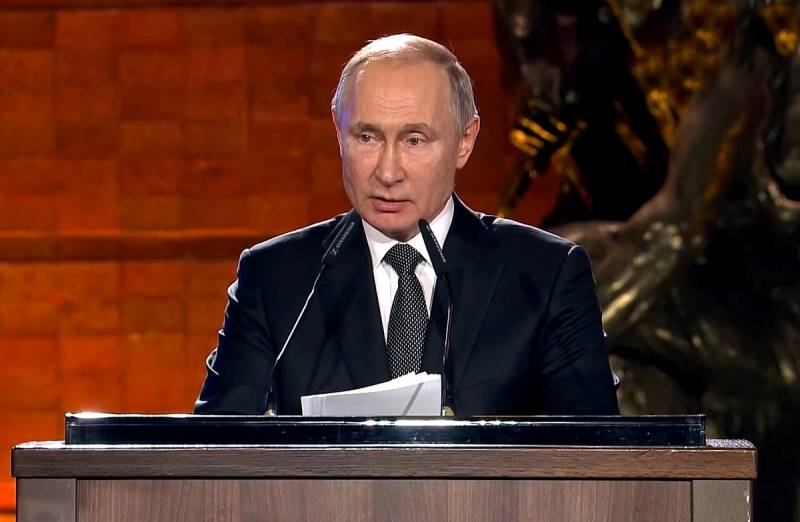 The words of Russian President Vladimir Putin about the need for an urgent meeting of leaders of leading world powers, said during a speech at the forum dedicated to the memory of Holocaust victims in Jerusalem, were again interpreted as their numerous interpreters wanted. For the most part, the Western media say that our leader offers the heads of state of the founding members of the UN something similar to the 1945 Potsdam conference, aimed almost at a “new redivision of the world.” In favor of Russia, of course ... It is unlikely that this is true.


Such aspirations would be a manifestation, at least political naivety, in which Vladimir Vladimirovich was difficult to reproach ever. And certainly he is not inclined to her now. So what can we talk about? What is Putin trying to achieve by calling for a dialogue of those on whom, as he said, “lies the responsibility for the fate of civilization”?

No time for Potsdam

First of all, it is worth mentioning that trying to compare the current geopolitical situation with the one that developed in the world at the time of the historic Potsdam summit, or the Yalta meeting of the "Big Three" preceding it (its president, by the way, mentioned in his address to the world leaders), it would not be that which is incorrect, but completely wrong. Then humanity, emerging from the destructive World War II, was preoccupied exclusively with how to prevent its recurrence. Today, a full-scale armed conflict will become not just a huge tragedy that destroys entire countries and takes many lives, but a planetary catastrophe, universal suicide. For a long time, awareness of this fact served as a huge restraining factor for superpowers, however, apparently, its effect has recently weakened to critical limits. In 1945, having defeated Nazism, mankind felt united and strove to unite for peace. Now it is again divided and more clearly divided into “camps” that do not have either sympathy or trust for each other. The evil clearly defined and personified in the middle of the twentieth century in the person of the Third Reich and its satellites is blurred, multifaceted, and opposition to it can no longer serve as a consolidating factor. Even “world terrorism”, which for a long time played the role of “threat No. 1” with relative success, does not at all attract it. On the other hand, the Earth’s population faces problems and challenges that are not directly related to the military confrontation at all, and, nevertheless, are equally potentially destructive and deadly. However, solving them together, too, has not yet been very successful.

In this case, the main difference, perhaps, is different. No matter how bitter it was to admit this, today’s Russia still can’t come close to comparing with the Soviet Union of the 1945 model - neither according to international authority, nor military, nor economic power, nor, which is especially offensive, the degree of their independence and independence from external forces. Yes, then half the country lay in ruins and millions of our compatriots gave their lives for the Victory. However, the USSR was overshadowed by the glory of the smasher of the most powerful armies in the world. In the West and in the East, it aroused respect, aroused fear. Yes, yes - there is nothing bad or embarrassing about this. Our enemies were afraid of us! Today's miserable attempts to “retroactively” redraw history are precisely the desire to completely get rid of this fear. Alas, at the present stage, Russia cannot show the world anything that is at least somewhat comparable in scale and grandeur to the 1945 Victory. The military success in Syria is, of course, undeniable, but the level, you know, is far from the same. The then leaders of the United States and Great Britain, who did not at all feel any sympathy for the USSR, nor, especially, friendship, simply had to negotiate with Stalin, making concessions and compromises. Then we could speak with the West from a position of strength - and we did. Now this number, alas, will not work. So there is no question of any “new Potsdam” in this case. This is not to mention purely “technical” differences. In 1945, of course, Germany and Japan did not take part in deciding the fate of the world. Now trying to ignore their opinion in solving global problems is not only short-sighted, but in principle unacceptable. And besides, it’s also unprofitable for Russia - speaking specifically about Germany, today it is one of the small number of Western countries with which dialogue is possible in principle.

Trying at the edge of the abyss?

It is possible that Putin, using the platform in Jerusalem (events in which some countries also managed to turn into an occasion for settling political accounts and organizing anti-Russian demarches), is trying to send a signal: Russia is ready for a conversation. However, on an equal footing, in a calm and respectful tone. Yalta-1945, most likely, is mentioned in this context.


There can be no talk of listening to new reproaches and threats. And if Vladimir Vladimirovich had planned to “capitulate” to the West, then in Russia today there would be processes diametrically opposed to those that we are witnesses to. Incidentally, it is possible that a conversation will be held on this subject as well. And then the abrupt changes that are emerging in our country in some near and far countries are perceived as something painfully nervous. And it would be okay with regard to the same reform of the Constitution, the strengthening of state power and other things that were not yet clear, but clearly visible in the processes that had begun, wringing their hands and moaning exclusively domestic liberals! They can smell the offensive of not too favorable time for themselves, and, most likely, they are not mistaken. However, what kind of nonsense are the Western media writing today: “the establishment of the eternal monarchy of Putin in Russia”, “preparation for a total war”, “the approaching revival of the Gulag” - and so on and so forth. And this is far from a complete list of "horror stories." Especially some people are worried about the refusal of our country from the primacy of "international law" over its own. This is precisely what the West clearly sees as a sure sign of "Moscow's readiness to renounce international treaties" and "the beginning of the restoration of the USSR." Well, yes, as if we had ripped apart the INF Treaty! Although ... Here is a reminder expressed in one source that the Belovezhskaya Accords on the collapse of the State Duma of Russia has not been ratified - this is interesting. Thanks for the tip.

It may turn out that Putin wants to meet with his colleagues from the United States, Great Britain, and France in order to explain: Russia does not intend to “leave the world community” or “shut itself down with an iron curtain”, as the “wise men” broadcast in world tabloids . Moreover, she’s not going to attack anyone. However, we will no longer play other people's games and by the rules of others. Perhaps the president wants to reassure world leaders, but at the same time still talk about really important things. Since the beginning of this year, one after another, mankind has received evidence of how small, interdependent and fragile our world has become. The military crisis in Iran, which ended in the death of a civilian airliner and almost two hundred civilians who had nothing to do with it, simply fell into the millstones of another’s conflict ... A deadly virus, already gathering its terrible harvest and threatening to spread to the whole planet in a matter of months, if not a week ... Natural disasters, catastrophes and terrorist acts ... At the Davos summit, UN Secretary General Antoniu Gutteres openly said that our world has come close to the point of no return and is already carrying The Four Horsemen of the Apocalypse. To them he attributed not only enormous geopolitical tensions and the climate crisis, but also technological progress, from a development factor turned into a threat to humanity. The UN Secretary General paid special attention to the growth of foci of natural disturbances and protests all over the planet, making the Earth more and more like a boiling cauldron or crater of an active volcano. It seems that we are really standing at the edge of the abyss, and this is far from empty rhetoric, not big words of politicians or activists.

The call of the President of Russia to a meeting of world leaders to seek mutual understanding coincided with another event. For 20 seconds ahead, the symbolic hands of Doomsday Clock were moved, showing how close our civilization came to self-destruction. The head of the Bulletin of Atomic Scientists organization that created this frightening warning symbol, Rachel Bronson, said that this is their closest position to the end of the world for the entire time that this watch exists. The reasons are concrete and more than serious: Iran’s possible withdrawal from the "nuclear deal", the DPRK’s refusal to continue denuclearization negotiations, and, most importantly, the planned collapse of the last "life buoy" of world security - the START-3 treaty. Before the Apocalypse, according to scientists, only 100 seconds remain. Will the world once again avoid death? At the very least, Russia is again calling for unification for this purpose.
Ctrl Enter
Noticed oshЫbku Highlight text and press. Ctrl + Enter
We are
Putin's phenomenon is Russia's main problem
Ten "defeats" of Putin
Reporterin Yandex News
Read Reporterin Google News
6 comments
Information
Dear reader, to leave comments on the publication, you must sign in.