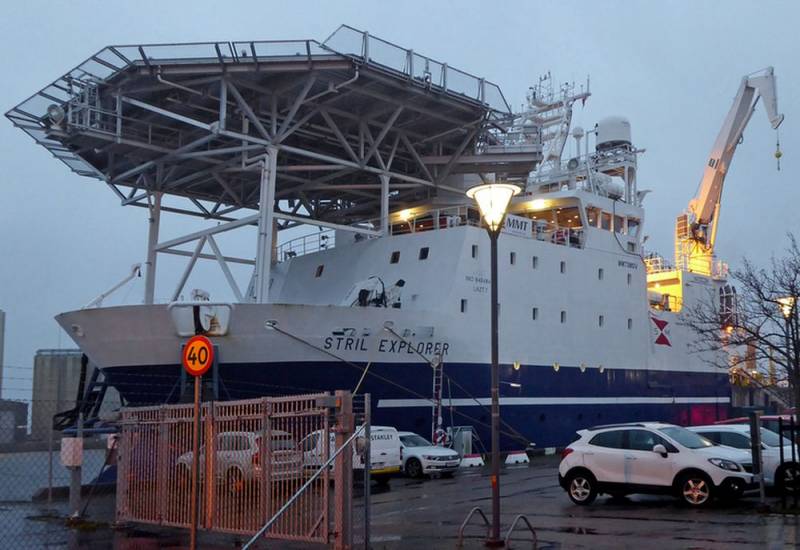 On January 23, 2020, marine monitoring resources reported that near the unfinished Nord Stream-2 gas pipeline there is a multifunctional offshore support vessel Stril Explorer (Norway flag, 2010, IMO: 9484845, MMSI: 259006000). This is an inspecting vessel, it is involved in monitoring the pipelines and is not subject to Washington sanctions.

Stril Explorer passed along the Nord Stream-2 gas pipeline and is now located near its unfinished section in the territorial waters of Denmark. All contract details with MMT Sweden are not known. However, it is known that usually a Stril Explorer inspection of a vessel involves visual inspection and instrumental inspection of pipelines using remotely controlled underwater vehicles (ROVs) along their entire length.

We remind you that on January 11, 2020, Russian President Vladimir Putin, at a press conference in Moscow, following talks with German Chancellor Angela Merkel, said that due to US sanctions, the completion of the construction of Nord Stream-2 would shift slightly, “but in the end this year or at the beginning of 2021, it will work. ”
Ctrl Enter
Noticed oshЫbku Highlight text and press. Ctrl + Enter
We are
Denmark explained why it pulled with permission for Nord Stream-2
Nord Stream 2 AG has filed Denmark's third application for a new SP-2 route
Reporterin Yandex News
Read Reporterin Google News
Ad
We are open to cooperation with authors in the news and analytical departments. A prerequisite is the ability to quickly analyze the text and check the facts, to write concisely and interestingly on political and economic topics. We offer flexible working hours and regular payments. Please send your responses with examples of work to [email protected]
Information
Dear reader, to leave comments on the publication, you must sign in.