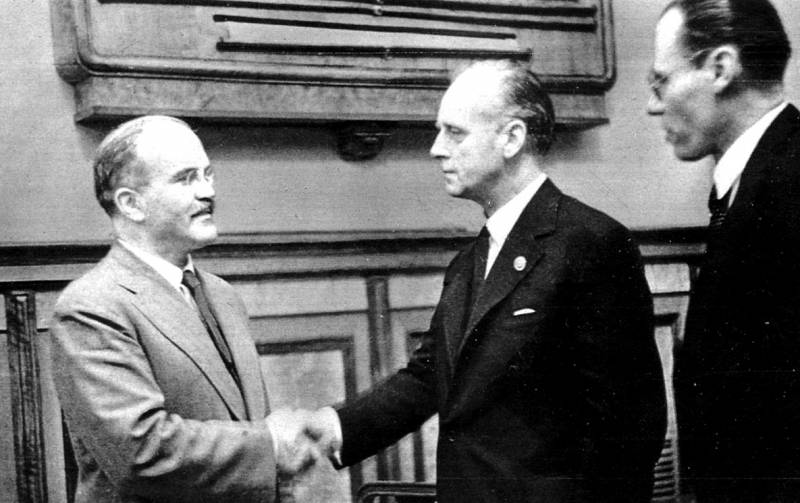 Not far off is the next anniversary of the most bloody war in the history of mankind. And the more we move away from those events, the more diligently the anti-communist propaganda works.


As one of the arguments allegedly confirming that the Soviet Union untied Hitler’s hands and allowed him to start a world war, “enemies of the USSR” cite the Molotov-Ribbentrop Pact. However, this is utter absurdity. And in order to understand this, it is necessary to turn to the chronology of events that took place on the eve of the largest war.

After the defeat in World War I in 1918, the German economy was almost destroyed. Payment of reparations, loss of territories, hyperinflation, catastrophic impoverishment of the population. All this literally "torn" the country from the inside and every year intensified the class struggle.

German capital, constrained by the Treaty of Versailles, could not restore the ruined economy and military-industrial complex. However, American banks came to the aid of a withering Germany, "pouring" billions of dollars into the country.

The active restoration and development of German military industry began. It was followed by an equally rapid economic growth.

As a result, from 1924 to 1929, the inflow of foreign capital into Germany amounted to 10 to 15 billion marks of long-term and over 6 billion short-term investments. All this led to a gigantic increase in the country's military and economic potential.

The formation of the Third Reich

In 1933, Adolf Hitler came to power. In the same year, the so-called “Pact of Four” was signed on consent and cooperation between Germany, England, France and Italy. By and large, the signing of the document with the fascist states, which even then did not hide their intentions, put an end to policy strengthening peace in Europe.

In 1934, a non-aggression pact was signed between Germany and Poland, according to which the latter assumed the obligation of constant cooperation with the Third Reich.

In 1935, a naval agreement was signed between England and Germany in London, which essentially gave a green light to the restoration of the German Navy in a volume almost equal to the French.

Further more. The "emboldened" Germany unilaterally refuses to comply with the part of the Treaty of Versailles regarding arms limitation. At the same time, a flagrant violation of international law did not meet any obstacles on the part of the guarantors of the aforementioned document: England, France and the USA.

On March 17, the USSR sent a note to the countries, expressing its readiness to begin an immediate discussion of practical measures that would help preserve peace and prevent a new slaughter. However, the response of the British government eloquently made it clear that Britain was in no hurry to impede Hitler's offensive plans.

On September 19, 1938, representatives of the governments of Britain and France demanded that the Czechoslovak authorities organize an unquestioning transfer to Germany of the areas inhabited by Sudeten Germans, arguing that maintaining peace and ensuring the vital interests of Czechoslovakia. At the same time, the proposal of the Soviet Union to protect the Czechoslovak government was ignored.

September 29-30, at a meeting held in Munich, which was subsequently called the "Munich conspiracy," the fate of the Sudetenland was decided. This was the first step towards further "dismemberment" of the whole country. And already on October 2, 1938, Poland, taking advantage of the "paralysis" of Czechoslovakia, captured Tesinska Silesia and some adjacent settlements on the territory of modern Slovakia.

At the same time, three days earlier, Germany and England signed a declaration of cooperation on most issues relating to the interests of both countries and Europe as a whole. A similar document (Bone-Ribbentrop) was signed between the Third Reich and France on December 6 of that year. In fact, both France and England concluded a non-aggression pact with fascist Germany.

As a result of the above “manipulations”, ideal conditions were created for the political isolation of the USSR. Given the growing danger of a new world war, the leadership of the Soviet Union began a negotiation process with England and France. The aim was to conclude an agreement on mutual assistance against fascist aggression in Europe.

However, in this case, there was initially a conflict of interest. After all, bourgeois countries, firstly, wanted to stay away from the impending bloodshed, and secondly, to direct the aggression of the Third Reich exclusively against the USSR. Naturally, negotiations quickly reached an impasse.

Meanwhile, the government of fascist Germany itself invited the Soviet Union to conclude a non-aggression pact, thereby putting our country before a choice. The signing of the treaty gave the USSR the opportunity to extend the peace for some time in order to prepare for repelling a future attack. Failure, on the other hand, meant the immediate pulling of the Soviet Union into the war, which, in fact, was what the Western provocateurs sought.

On the night of August 24, 1939, the Soviet-German treaty was signed. Both parties pledged to refrain from aggressive actions directed against each other, and resolve any disputed situations peacefully. The Molotov-Ribbentrop Pact allowed the USSR to strengthen its defense, as well as “push” its borders far to the west, protecting strategically important industrial regions and forcing Nazi Germany to launch its offensive hundreds of kilometers from the Narva-Minsk-Kiev line.

A detailed examination of the situation in those years makes it clear that all the accusations against Stalin about the "mythical" alliance with Hitler are absurd and baseless.

Moreover, the rapid creation of a military-economic base in Germany, the formation of the Third Reich and the rearmament of the German army, became possible only thanks to Western countries.

In turn, the signing of the Molotov-Ribbentrop Pact by the Soviet Union became a necessary measure that fully paid off.

Ctrl Enter
Noticed oshЫbku Highlight text and press. Ctrl + Enter
We are
Ukrainians believe that the destruction of the Crimean bridge is not far off
What is more profitable: mortgage or apartment rental?
Reporterin Yandex News
Read Reporterin Google News
1 comment
Information
Dear reader, to leave comments on the publication, you must sign in.