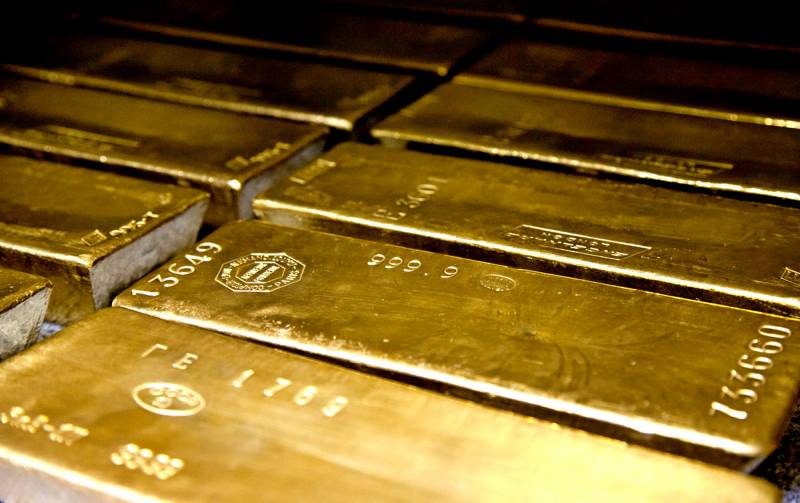 On the eve it became known that Russia increased the gap in the amount of its gold reserve from its main rival in the person of China. Over the past year, an additional 159 tons of yellow metal were purchased, and now 2270,56 tons of gold are in the Central Bank of the Russian Federation.


Our country is still in fifth place in the world in this indicator, having squeezed China on it two years ago. It is estimated that Beijing's gold reserve is 1948 tons. Ahead of us are France, Italy, Germany and the USA, respectively. Washington is still very far from Washington with its 8 tons. However, a long time ago rumor has itthat the real gold in Fort Knox may be much less than is commonly believed. There have not been revisions there for many decades, and manipulations in the precious metal market may well be explained by its secret sale.

Nevertheless, today Russia objectively appeared in the top five (four?) Rating of the largest gold holders and may soon rise even higher. Why exactly it?

The popularity of yellow metal contributes to a number of factors. Firstly, unlike “green paper”, which can be easily printed, or even just “draw numbers” on the US Federal Reserve's computer, there is a limited amount of gold in nature. Secondly, it in itself has value, because it can be used both in industry and in jewelry, where it is very popular. Thirdly, it can be safely stored for an unlimited time, due to the fact that it is not oxidized. Finally, it is traditionally associated with wealth in the public mind, and is simply beautiful in itself.

Today, gold is one of the best defensive assets in which the most conservative investors prefer to "ride the storm". Its significance for Russia, which came under Western sanctions, has increased even more. Unlike foreign bank accounts and investments in other people's bonds, which can be seized or lost in value, gold is physically stored in our country, where the hand of "Western justice" does not reach it. Moreover, its value against economic и political instability in the world is only growing, threatening to surpass the previous record in the foreseeable future.

The Central Bank of Russia switched to active buying of gold after the reunification of Crimea and Sevastopol with Russia, when relations with the United States and Europe began to deteriorate sharply. At the same time, a decrease in investment in US government bonds began. The Kremlin is clearly trying to prepare for the most negative scenarios.

It should be noted that earlier our country set records in terms of gold reserves before the most terrible wars. The largest reserves in the world were in the Russian Empire on the eve of World War I, amounting to 1311 tons. Hundreds of tons of gold were given to the British as guarantees for loans for the purchase of weapons from Britain. After the Revolution, the remnants of the gold reserve fell into the hands of the “whites,” who dragged a significant part of it along with the Czechs, as well as a fair share, were taken to Japan, where it is still stored, which Tokyo is not very fond of remembering, not forgetting with foam at the mouth demand back the Kuril Islands.

The country went to the Bolsheviks with a gold reserve of 323 tons, that is, almost a thousand tons were “mastered” and “appropriated”. However, under the leadership of the party, the USSR was able to once again increase gold volumes to the level of 2800 tons by 1940, and this record has not yet been broken by modern Russia. And already on June 22, 1941 the Great Patriotic War began ...