Hard choice for the USA: Boeing - “you can’t have mercy on execution” 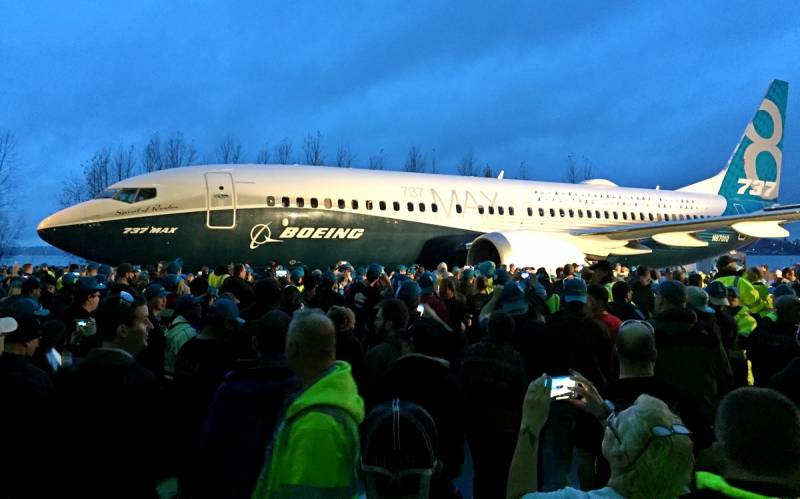 Watching the actions of the United States authorities in relation to the aircraft giant Boeing, one involuntarily recalls the biblical quote about the left hand, which does not know what the right hand is doing. In this situation, the “hands” of the US federal services and bodies do not seem to act differently, but contrary to each other. The Ministry of Finance, in the person of its head Stephen Mnuchin, is sounding the alarm: in the event not only of the Boeing collapse, but of aggravation of the problems that the corporation has today, the country will experience a drop in GDP in a not weak amount.


At the same time, the US Federal Aviation Administration (FAA) continues to tear down the business reputation of the concern, finding more and more shortcomings, shortcomings and "problem spots" in its products. At the same time, the hopes that the 737 MAX model, which has become the cause of the current troubles of aircraft manufacturers, will ever return to air, are becoming more and more illusive, turning gloomy prospects for Boeing into simply catastrophic ones.

Someone may decide that the head of the US Ministry of Finance, who lamented that last year’s turmoil with the Boeing 737 MAX alone, had already cost the country half a percent of annual GDP, exaggerated the severity of the issue or, as is usual with government officials of this level, has exaggerated. Nothing like this! In order to understand the importance of the aircraft building corporation for the United States, one should delve into how seriously it is “embedded” in the global production and financial chains there. And, by the way, far from there! I would venture to recall some almost well-known things: the engines installed on Boeing aircraft are the products of another industrial giant, General Electric Corporation, which manufactures them together with the French company Safran. United Technologies Corp., Honeywell International - companies with a turnover of tens of billions of dollars per year. Hexcel Corp. Woodward Inc. - firms are more modest. Their sales volumes "just something" exceed a couple of billion dollars. What unites them? Almost everything they produce goes to Boeing factories. The protracted “peak” of aircraft manufacturers is already going sideways for their “allies”. So, Spirit Aerosystems claims to have big problems. It would seem a solid enterprise with sales of $ 7 billion a year. Here are only 80% of its products requested exclusively at the above address. To date, spare parts and accessories for more than 100 Boeing airliners, which had to stop the conveyors that had left the 737 MAX until now, have been stuck in the company's warehouses.

The result is more than logical - Spirit Aerosystems has to lay off about 3 thousand employees of its plant in Kansas. Next in line are similar cuts in Oklahoma. The manual assures: temporarily. However, everyone is well aware that this time can stretch for an indefinitely long period. Here is just one example for you ... Moreover, do not forget that many enterprises in the aviation industry are, without exaggeration, city-forming, or even “dragging” themselves the economy whole counties. After all, they all also have their suppliers, use logistics services, and also “feed” local financiers, insurers, marketers, and many others. In addition, these are still taxpayers who regularly and conscientiously replenish the US budget. Seattle-based workshops for the production of 737 MAX have already caused a strong "domino effect" in the country. It is scary to think about what can happen if the entire corporation collapses. Only in the second quarter, a decrease in sales of their airliners and components to these “put” the total US exports by 7.5%. Indeed, last year Boeing received orders for only 246 vehicles of all types and types, which was the result that has been minimal since 2003. From 200 737 MAX its customers have already refused - who needs a liner whose flights are prohibited? In light of this, it is not surprising that the newly appointed head of the corporation, David Calhoun, whose salary is about one and a half million dollars a year, has already been promised a bonus reward of 7 million if he manages to return 737 MAX to heaven. The prize, of course, is more than tempting, but whether Calhoun or anyone else will be able to achieve the task is a very big question.

This delightful passage is a quote from the internal correspondence of Boeing employees discussing just the new airliner - 737 MAX. In their opinion, to call the car successful was problematic initially. It was her one of the employees who called the plane, which was designed by the workers of the arena under the strict guidance of adoring banana primates. I must say that the expression “My tongue is my enemy”, which fell “under the distribution” of the corporation if it survived the current difficult times, should be cast in bronze and placed over the entrance to each of its own offices. Well, at least hang up in the offices in the form of bright posters for staff. It was in their communication that the employees of the US Federal Aviation Administration found, indeed, a storehouse of not just incriminating, but glaringly scandalous information about the company's activities. For example, it was just a shocking fact: it turns out, back in 2017, one of the airlines turned to Boeing, asking to organize training for pilots who have to fly on the 737 MAX that they recently acquired. The corporation did not find anything better than to “kick off” this request because of the “high cost and labor costs”, in addition to calling the airline representatives “fools” and “idiots”. Everything would be fine, but it's just about the Lion Air company, the liner of which crashed into the Java Sea in October 2018, opening a terrible account for the fatal crashes of the 737 MAX, killing the corporation that gave birth to it today. The FAA investigating officers obtained relevant information from official correspondence, which, fortunately, no one even thought of clearing it up. What other "skeletons" can be hidden in the "cabinets" of Boeing?

The result is a situation in which the federal regulatory authorities “deal” with the aircraft manufacturer not only in all severity, but showing partiality far beyond this limit. As a result, enormous fines are poured on the corporation, as if on an amateur fast drive, caught at the public harassment of the beloved wife of the head of the traffic police. Not so long ago, another 5.4 million dollars were “hung” on them for new potential problems with flaps revealed in the same ill-fated 737 MAX. Something there could go wrong, causing injuries to passengers and emergency situations during landing. However, this is still “flowers” ​​in comparison with what the testers managed to “dig up”, for the hundred thousandth time checking the liner software, which caused two terrifying disasters. They found violations of the monitoring function of this software itself, because of which not all control functions of the system worked properly. What such an “jamb” will result in for the aircraft manufacturer, no one even today can even speculate. After all, it was precisely the corporation’s excessively free circulation with the main computer systems 737 MAX that became the talk of the town, which today allows many to question its ability to ensure the safety of flights of its own production machines as such. A very significant moment - I did not have time to go through the world media news about the crash of the UIA passenger liner in Iran, as the shares of the corporation collapsed immediately by 2%. Not a word has yet been said about the causes of the accident, but the words "disaster" and Boeing, spoken simultaneously, immediately provoked a predictable reaction.

As a result of all this, the US government today faces an extremely difficult choice. On the one hand, the further the investigation of all the causes and circumstances that led to unprecedented air crashes in 2018 and 2019 is moving forward, the more obvious it becomes the fault of what happened precisely to the top management of Boeing, in pursuit of superprofits that frankly did not give a damn about people's lives and acted on the principle: “Maybe it’ll blow!” Not carried. And now I have to answer. The drama of the situation is added by the fact that the story of the 737MAX, more than a thick shadow, is cast on the reputation of the US Federal Aviation Administration. The actions of its employees, who, through their fingers, once looked at rather peculiar actions of the corporation during the certification of this model, suggest at least monstrous gouging and frivolity. If not for something much worse ... FAA experts and inspectors are naturally atrocious today, perhaps not so much because of fears that new accidents will happen, but to save the honor of their uniform. And they will most likely do it exactly up to the moment when the “Postpone!” Command It will sound from the very top. Only then can they be firmly convinced that they themselves will not take up next. And if you “untwist” everything that happened to the end, then, most likely, from the business reputation of Boeing in the end there will be no stone unturned. But, on the other hand, this will mean for the United States such a tsunami of problems in the economy and social sphere that nobody needs in Washington. In particular, to Donald Trump on the eve of either impeachment, or an attempt to be re-elected for a second term. Most likely, the Americans will do everything to save the company, which is one of the national symbols. Save at all costs, regardless of any scandals and incriminating evidence.
Ctrl Enter
Noticed oshЫbku Highlight text and press. Ctrl + Enter
We are
Airbus vs. Boeing: the battle of the "winged giants" is tightened
Boeing will not take off this year. But it will not crash
Reporterin Yandex News
Read Reporterin Google News
6 comments
Information
Dear reader, to leave comments on the publication, you must sign in.