14 May 2018
2
China has developed the world's largest modern civilian aircraft - the amphibian AG600. By 2022, as reported by the Central Television of China, China will begin supplying a new aircraft. Already in 2021, the China Aviation Industry Corporation (AVIC) should receive an appropriate certificate from the Civil Aviation Authority, which will allow to begin deliveries of aircraft to customers in 2022. 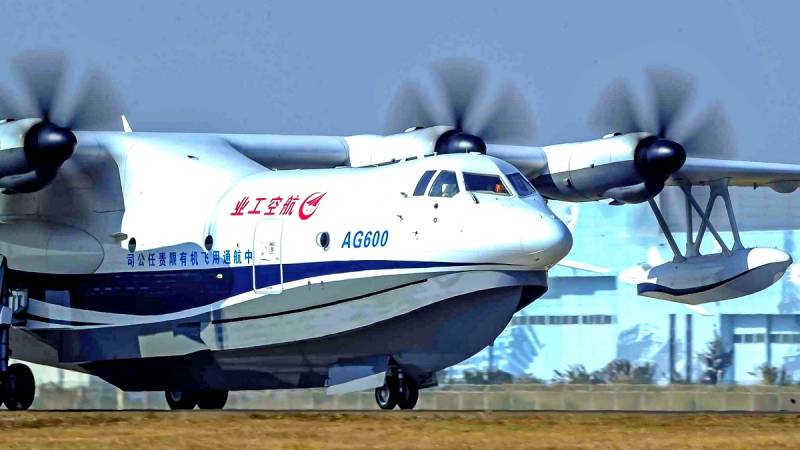 Recall that Chinese designers began work on the aircraft - the amphibian AG600 back in 2009. The first aircraft was released in July 2016. The main purpose of the new seaplane is to fight forest fires and conduct rescue operations, including in remote areas. It is not known for certain whether the People's Liberation Army of China will use the new aircraft - the amphibian. It is possible that parts of the PLA will indeed adopt such aircraft on which it is convenient to patrol the coastal territory.

The specifications of the AG600 are impressive. Its mass is 53,5 tons, but at the same time, the aircraft can reach speeds of up to 500 km / h and fly 4,5 thousand km while in the air for up to 12 hours. The length of the amphibious aircraft is 37 meters, the wingspan is 38,8 meters. In 20 seconds, the aircraft can take on board up to 12 tons of water.

A big plus, like all aircraft of this class, is the ability to take off and land not only on the runways of airfields, but also on the water surface. It is this circumstance that makes amphibious aircraft indispensable in conducting rescue operations, fighting fires and responding to emergency situations. So far, the AG600 is the world's largest amphibious aircraft.

The first successful amphibious flight took place in December 2017, taking off from the airfield of Zhuhai city in the southern Chinese province of Guangdong and spending 64 minutes in the air. During the test flight, a crew of four specialists was on board the ship, and in flight the amphibious aircraft was accompanied by another aircraft with a team of technical experts who observed the flight features. In June 2018, developers are going to make a flight from Zhuhai to Jingmen, where the amphibian will take off for the first time from the water surface. For testing the aircraft selected reservoir in Jingmen.

It is worth noting that in the Soviet Union back in 1986 the A-40 Albatross amphibian was developed, which even surpasses the modern Chinese aircraft in some respects. 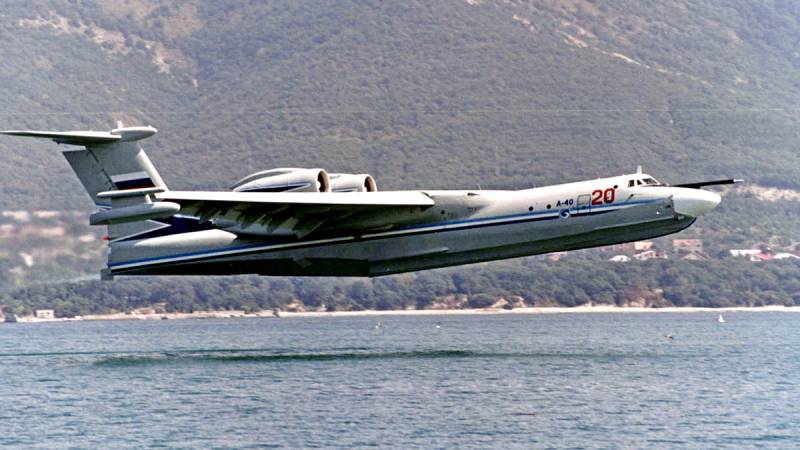 For example, the length of the A-40 was 45,7 m, the wingspan was 42,5 m, and the speed reached 700-800 km / h. In 2012, the project was closed, but in 2016 resumed. It is planned that in 2020 the A-40 will be replaced by the famous anti-submarine aircraft - Be-12 amphibians. If the production of the A-40 really becomes mass, then the Chinese company will not be able to take the "palm" from Russia for the most powerful and largest aircraft - amphibians.
Ctrl Enter
Noticed oshЫbku Highlight text and press. Ctrl + Enter
We are
Will Russia's new project be able to challenge Boeing and Airbus
MS-21 airliner: there are risks, there is no plane
Reporterin Yandex News
Read Reporterin Google News
Ad
We are open to cooperation with authors in the news and analytical departments. A prerequisite is the ability to quickly analyze the text and check the facts, to write concisely and interestingly on political and economic topics. We offer flexible working hours and regular payments. Please send your responses with examples of work to [email protected]
2 comments
Information
Dear reader, to leave comments on the publication, you must sign in.