Formal “independence”: how Germany and the USA influence Kyiv policy 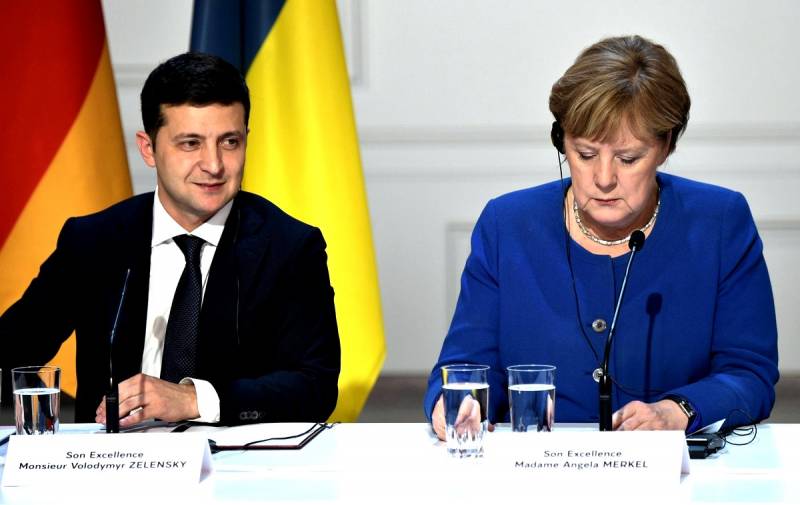 After the Maidan in 2014, Ukraine has largely lost its political subjectivity. Caught in a millstone between the West and Russia, she fell simultaneously under the influence of both the USA and Europe, which sometimes begin to drag it in different directions. Recently, it has become more noticeable.

Speaking about the influence of the United States, it should be remembered that in their political elites, to put it mildly, there is no unity. Maidan is a project of the predecessors of Donald Trump, the Democrats. In general, the US president’s course towards a settlement between Ukraine and Russia is noticeable, but the influence of his political opponents on Kiev is still quite high. Those draw a frankly aggressive anti-Russian line. The head of the General Staff of Ukraine Khomchak explains:

In the discussions that are being held on various television shows, for some reason our society clutches at the worst option and begins to think that everything - tomorrow the aggression will begin.
The main threat to the security of Europe is called the “annexed” Crimea, which Moscow is seriously stuffed with weapons. At the same time, the Ukrainian governor for some reason believes that the Russian Crimea is not a threat to the Black and Azov Seas, but to the Mediterranean. It’s a rather strange statement, considering that NATO’s NATO-controlled Turkey, which controls the straits, as well as Romania with its missile defense system designed to intercept missiles, is on the way to the Russian Black Sea Championship. In the Mediterranean Sea itself it is not possible to push through from the Sixth Fleet of the USA, NATO ships and their military bases.

All these strange discussions give rise to the need for a large and strong Ukrainian army to protect the West from Russia. The ex-head of the NSDC Nezalezhnaya Turchinov, a man of the previous team, said that the Kremlin was preparing for a “full-scale war in Europe,” but the same Khomchak objected to him in absentia:

In my opinion, and based on what the General Staff analyzes, we have come to the conclusion that open military aggression from Russia is not among the first threats, but is on the list of “extreme” options, although the most distant ones.
Such contradictory statements can be explained by their different "customers".

It is no less curious to see how the West influences the internal political processes in Independent. One of the key reasons for the events of 2014 was the question of the state structure of Ukraine, the ability of such different regions as Eastern and Western Ukraine to determine for themselves how they live, what language to learn and speak.

With federalization did not work out. Instead, President Poroshenko conducted the so-called "decentralization." The lower-level management system has changed through the creation of the community, and its funding has expanded due to national taxes. As a result, local budgets increased, which had a beneficial effect. However, in essence, a real centralization took place, as local budgets began to directly depend on Kiev, which gave him the opportunity to push through his heads of regional administrations.

The project of "decentralization" from Zelensky tightened the nuts even more. According to him, the prefects appointed by the president should exercise real executive power in the regions. The head of state himself has the right to block the decisions of local councils, their financial rights sharply decreased. It is important that the DPR and LPR are virtually excluded from the reform, since other regions that could also wish for the “strange” can “decompose” their special status.

Thus, the “servant of the people” planned to turn Ukraine into an even more unitary state, which became earlier one of the root causes of the events of 2014 and the subsequent civil war. However, this project was unexpectedly curtailed after Chancellor Merkel’s call to President Zelensky. Ukrainian network sources comment on this as follows:

The Chancellor said that this bill does not suit the Europeans themselves, and it will also have a bad effect on the “Minsk process” on the “Donbass case”. This bill will not suit Russia, therefore, the negotiation process will be disrupted.
After this, it is probably worth putting an end to the discussion about the real degree of “independence” of Ukraine.
Ctrl Enter
Noticed oshЫbku Highlight text and press. Ctrl + Enter
We are
Ukraine from the inside: traitors, curators and those who watch from the Kremlin
Ten "defeats" of Putin
Reporterin Yandex News
Read Reporterin Google News
Ad
The publication is looking for authors in the news and analytical departments. Requirements for applicants: literacy, responsibility, efficiency, inexhaustible creative energy, experience in copywriting or journalism, the ability to quickly analyze text and check facts, write concisely and interestingly on political and economic topics. The work is paid. Contact: [email protected]
Information
Dear reader, to leave comments on the publication, you must to register.
I have an account? Sign in