After Putin's message, Ukraine stiffened for a reason 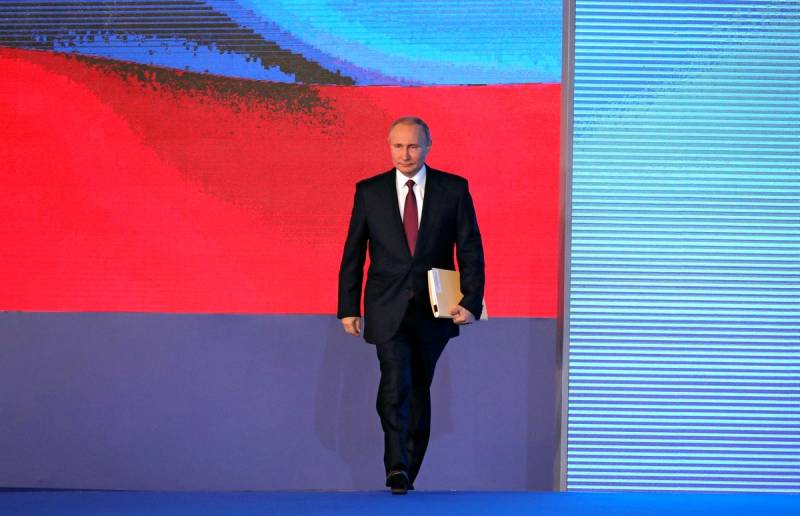 Still, Ukraine is a completely phenomenal country. Well, that’s the way to stay within the framework of censorship vocabulary. For the third day there is the most lively discussion of the message of the President of Russia Vladimir Putin to the Russian Federal Assembly. And this despite the fact that, according to the local "patriots" completely discouraged by this fact, the "unfathomable" is not mentioned in it by a single word!


You can, of course, on this occasion indulge in reflections about the obvious secondary nature of the Ukrainian "state", as well as the painful dependence of its politicians and other public figures from that same “eastern neighbor” whom they hate so much with every fiber of their soul ... However, the obvious should be admitted: Kiev really has something to worry about after what happened in Moscow on January 15. Let's try to figure out why.

The main point about which, in fact, the ex-president of the "non-profit" Petro Poroshenko, and his party colleague, a big lover of Dutch "grass" and provocative demarches in various instances of the European Union, People's Deputy Viktor Aryev, is not even theirs fear of having Vladimir Vladimirovich as his opponent in an indefinitely long term. No, much more these figures are frightened by something else - Putin's intention to finally get rid of the most grave and shameful "shackles" that the West once imposed on Russia. It is about the supremacy of the so-called "international law" over domestic laws. And the point here, of course, is not at all whether or not politically motivated decisions of the same ECHR will be obediently implemented in our country. The point is in principle. The President believes (and there is no doubt about this issue that he will receive the broadest nationwide support!) In at least 9 cases out of 10, they directly run counter to the national interests of Russia, for her it is not a decree. In fact, this intention alone contains the whole meaning of the country's future course - both in foreign and domestic policy. In fact, Putin acknowledged a huge mistake, which was all his efforts to "get along" with the West, while following the path of concessions and agreements that were unfavorable to us. He tried honestly, tried his best. He persuaded, warned, reasoned ... But he was not heard - not in Munich in 2007, when the Russian leader first tried to reach out to the “civilized”, or later.

Now, if you please, get Russia, which, in fact, passes into the regime of a besieged fortress ready for battle. The Kremlin finally rejected what at times held him back in making fateful decisions. There is no doubt - if it had happened in 2013, and the “Russian Spring” would not have been locked within the Crimea and Donbass. There would be no civil war tormenting Ukraine, no revival of neo-Nazism in it, there would not be thousands of deaths and hundreds of thousands of warped destinies. Equally, there would be no mass of problems that today constitute a very real headache for our country. It is a clear understanding of this fact that scares in Kiev all those who came to power and hold on to the squalid political "Olympus" solely because at the time, someone did not want to aggravate relations with the "world community". Which, incidentally, did not appreciate this gesture of goodwill, but perceived it solely as Russia's weakness and as an excuse for exerting infinite pressure on it. Now this has ended. Some in Ukraine, and not only there, have already hurried to call the program set forth by Vladimir Putin “the beginning of preparations for a big war”. Like, now Moscow, not wanting to observe even the appearance of “decency”, ka-a-ak will pounce on all neighboring countries! But how it will start to “capture” everyone for no reason ... About this, for example, a certain Yuri Shulipa (already the whole director of the Institute of National Policy) is broadcasting in the media "not up and down". He is convinced: "the leadership of Ukraine" should "worry about maintaining the territorial integrity of their country." He also gives similar recommendations to Belarus, Poland and the Baltic countries.

Now everything will be serious

Our ancestors characterized this “peculiar” perception of reality with the saying: “I heard a ringing, but don’t know where it is.” Of course, Russia is not going to attack anyone. However, to demolish stoically spitting and blows - even more so. We are not going to start a war, but we make it clear to the whole world that we are ready for it. The same Shulipa paints an apocalyptic picture: with his message, the Russian leader “seems to be completing the construction of the bipolar world”, finally destroying the picture that is familiar and sweet to people like him. From now on, humanity is "divided into two camps." In one, it’s understandable, “a shining city on a hill”, the great and infallible United States in the company of a “civilized world community”, and in the other, ominous and dark, “Putin with dictators-rogue third gas-banana quasi-republics.” Sorry, the quote is verbatim ... The fact that a good half of the "world community", most of all, the majority of the countries of the European Union have been sick of Washington’s tricks for a long time, and China, which is an undoubted ally of Russia, somehow weakly draws on the status of something there ”, The Ukrainian whit absolutely does not care. As, however, and setting the tone for all the hysteria around the presidential message of Petro Poroshenko. All that his brain, which was cruelly exhausted by no means narzan, was caught in watch speech, is that “Putin is not going to stop the war with Ukraine” (and he already started it ?!), and that Vladimir Vladimirovich “is going to stay forever” . Clearly, this condition is called "toad crushes." Such a clear manifestation of black jealousy on the part of the “leader of the nation”, who forcibly spent the rest of his life and lost the election to the clown, looks especially disgusting.

Other attempts at conspiracy theories to "read" the presidential speech in Ukrainian sound even more ridiculous. What is even the Aryev version of the fact that future changes in our Constitution will be aimed at "creating opportunities for further accession of territories", at least even more glaring nonsense from Roman Tsimbalyuk. This time, the brightest representative of surrealistic post-Maidan journalism made a stunning conclusion: it turns out that, calling for an increase in the birth rate in Russia, Vladimir Putin means "millions of new soldiers for the empire." And also, he dreams of capturing the “non-fallow”, as a “donor country of the human resource” for future “predatory wars”. This is not even science fiction, but pure psychiatry. The only relatively common thought in the outflows of Tsimbalyuk can be considered the recognition of the fact that many of his compatriots were forced to “flee to Russia from the war in the Donbass”. However, the enchanting semantic twists and turns of the propagators of the “uncool”, desperately trying to find in the words of Vladimir Vladimirovich what is not there and close, you can even understand. For ordinary, normal, and sane Ukrainians, Putin’s message is more than informative. They announced in it the sums of payments for the birth of children, fixing in the Constitution of Russia the minimum wage, the actual indexation of pensions and social benefits, as well as the like, related to the social sphere that is close and understandable to everyone, they can only envy today. Or, even worse - to compare with the situation that they have in their own country and draw appropriate, well-defined conclusions.

The Ukrainian political "party" cannot but strain the course announced on January 15 to rally and strengthen Russia, its refusal to play according to alien, imposed rules. You don’t have to be seven spans in your forehead to understand: from now on, any attempts by Kiev to turn the implementation of the “Minsk Agreements” into surrendering the Donbass and its “de-occupation” according to the bloody script written in Kiev and approved in Washington will turn out to be consequences for the leadership “not fallow” unpleasant, but I’m not afraid of the word, fatal. There is nothing to talk about even more extreme options, such as the "Kerch provocation" or military escalation in the East. Something tells us that the reaction will be lightning fast and crushing. Now - without looking at anyone. However, this is not all. Putin’s words about the inadmissibility of attempts to revise the results and the essence of the Great Patriotic War have a direct relation to Kiev, which played in neo-Bandera politics. Not only to him alone, of course, but the UN resolution on the inadmissibility of the glorification of Nazism was not just as well adopted ... Moreover, without this there were more than real and significant reasons to finally put in place the presumptuous and felt unpunished behind a broad American back, the Maidan political punks, if desired, Moscow can find more than enough. This is the ongoing harassment of the Russian-speaking population, and endless provocations of various kinds, and direct insulting demarches against Russia, which official representatives of Ukraine of all levels regularly allow themselves. Something tells: now all this can be very expensive.

What happens to the extreme resembles a situation when in a certain conditional boxing ring one of the fighters, who had previously been entangled in arms and legs, suddenly restrains his bonds. And his adversary, up to this point enjoying his own “advantage”, is horrified to realize that now there may not even be a wet spot left from him. Another “lamp of Ukrainian political thought” Vitaly Portnikov, for this reason, so exclaims: “The Ukrainian state can simply cease to exist!” Deep thought. And very timely. It’s just that neither running away from the ring, nor even throwing a towel at him as a sign of surrender, will most likely fail.
Ctrl Enter
Noticed oshЫbku Highlight text and press. Ctrl + Enter
We are
Ukraine from the inside: traitors, curators and those who watch from the Kremlin
Ten "defeats" of Putin
Reporterin Yandex News
Read Reporterin Google News
76 comments
Information
Dear reader, to leave comments on the publication, you must sign in.