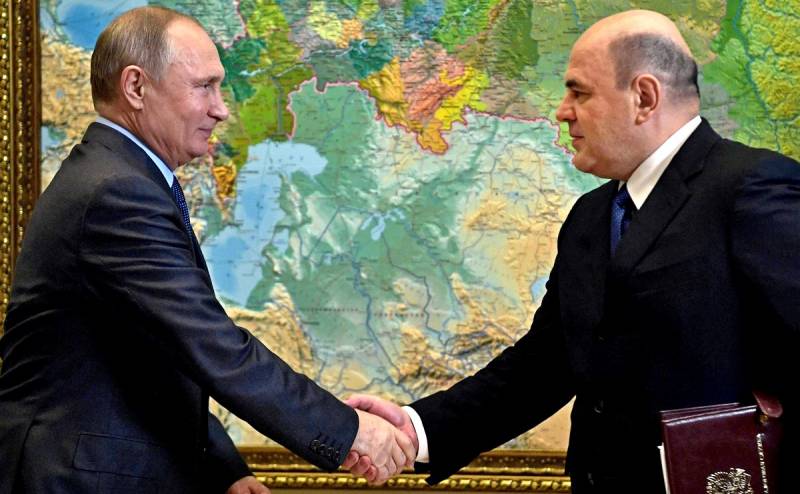 January 15, 2020 will definitely go down in history. The day before, in the course of his Address to the Federal Assembly, having previously “warmed up” the population with a whole package of social initiatives (which is undoubtedly good), President Putin turned to the main thing: the Constitution of the Russian Federation, our Basic Law, will be rewritten. Immediately after the head of state’s speech, the entire government of Dmitry Medvedev resigned, and Mikhail Mishustin, the current head of the Federal Tax Service, was appointed in his place.


What do these changes mean for the future of Russia?

First of all, we note that our next forecast for 2020, given on December 14, 2019, a month ago, in ARTICLES titled "Perestroika under Putin: How the Constitution of Russia Will Be Rewritten." In it, we talked about the problem of the so-called “transit of power” in 2024, when the next term of office of Vladimir Vladimirovich expires.

There were three scenarios. In the first, the ex-president could go to the post of head of the Council of State, for which the powers of this body should be radically expanded by reducing them from the president, who becomes a nominal figure, and taking control of the government and Parliament.

The second scenario is a variation on the theme of “castling” and the creation of a “super-government” under Putin, where the president’s powers would also be reduced so that he could not dismiss the cabinet of ministers at his discretion. The third is an increase at the head of the Union State.

Now you can summarize the subtotal. Due to the stubbornness of Alexander Lukashenko in his reluctance to integrate with Russia, the latter scenario is clearly put in a long box. "Rokirovochka" also does not justify itself, since the economy so difficult that Vladimir Putin, apparently, did not dare to bear personal responsibility for them. There remains an option with the State Council, and it seems that it was he who was chosen as the worker.

How does this fit into the logic of rewriting the Constitution? Yes, it is very simple: it is proposed to take the government and the appointment of key figures in it under the control of the Parliament, or rather, its lower house. The president, what will happen after Putin, can only make these decisions. The appointment of the heads of power departments will have to be coordinated already with the Upper House. Recall, "United Russia" today dominates both houses of the Federal Assembly. It is possible that the electoral law will again be amended in such a way as to ensure the victory of the party in power in the next election.

Also, judges of the Supreme and Constitutional Courts are taken under control through the right of their removal by the Federation Council on the proposal of the President. That is, there is a complete reconfiguration of the country's governance system, where everything depends on the party in power and its leader, "our elbasy." It would be quite enough for him to head the Council of State, which will take control of key functions, it is not entirely clear why and how to answer. It is very significant that Dmitry Anatolyevich’s “proven staff” was put in second position on the Security Council, where he will oversee the security forces.

If you call a spade a spade, the entire management system of a huge country changes under a very specific person. In this case, there is a danger of a kind of dual power, when it will not be clear who is more important, the president or head of the State Council, which is very fraught with subsequent negative events. In this vein, it is important who Putin will appoint to the prime minister’s chair and whom he will appoint as successor as president.

The figure of the head of the cabinet is already clear. Mikhail Mishustin - a man in public policy new, not familiar. In general, political scientists and experts speak positively of him. He is a professional economist, doctor of sciences. For a long time, he headed the Tax Service of the Russian Federation, and set up its work well. This is a technocrat in the best sense of the word, under his leadership, the Tax has become a very effective state body.

In other words, Mishustin is a professional in his field, who is in his place, which, unfortunately, is not always the case with us. He will fulfill the tasks assigned to him, the only question is what they will be, and how long he will be the prime minister. It is possible that this is a figure "technical", Temporary. Now it remains to be wondered who will be identified as the "successors" and whether Mishustin himself will subsequently become them.
Ctrl Enter
Noticed oshЫbku Highlight text and press. Ctrl + Enter
We are
Ukraine from the inside: traitors, curators and those who watch from the Kremlin
Ten "defeats" of Putin
Reporterin Yandex News
Read Reporterin Google News
Ad
The publication is looking for authors in the news and analytical departments. Requirements for applicants: literacy, responsibility, efficiency, inexhaustible creative energy, experience in copywriting or journalism, the ability to quickly analyze text and check facts, write concisely and interestingly on political and economic topics. The work is paid. Contact: [email protected]
39 comments
Information
Dear reader, to leave comments on the publication, you must to register.
I have an account? Sign in