Haftar’s Moscow demarche: why the marshal did not succumb to Kremlin pressure 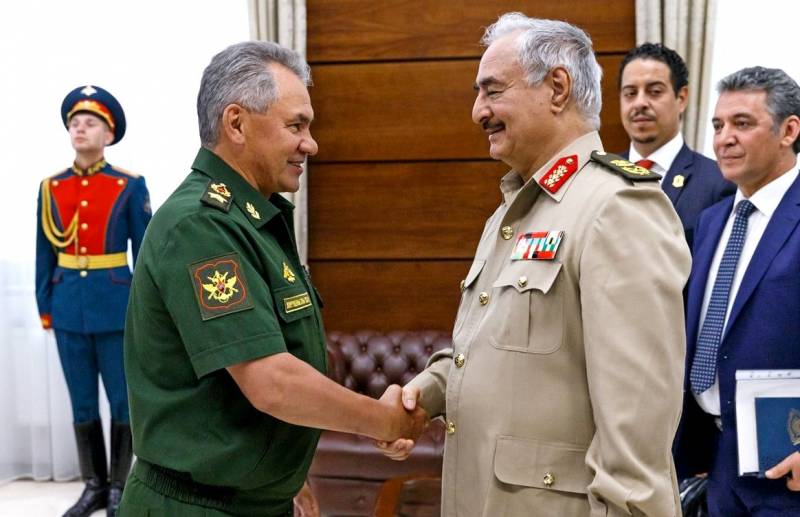 The negotiations on the settlement of the situation in Libya that took place on January 13 in Moscow, many very clever gentlemen and comrades, were already in a hurry to declare them “disastrous” and “not fulfilling expectations.” Well, how can it be - after all, Haftar and Sarraj did not merge in front of the cameras in fraternal embraces against the background of modestly looming mean tears of Vladimir Putin and Recep Erdogan that were wracking away on the occasion ...


Naturally, the thesis that the hasty departure from our capital of an unbending marshal, who had never signed an agreement on reconciliation, was nothing more than a “serious foreign policy defeat of Russia”. Suspicious enthusiasm immediately connected such “main calibers” of the anti-Russian psychological warfare as “Voice of America” and Deutsche Welle with the explanation of this idea to the masses. Cool, gentlemen! With what, in fact, joy, are you in a hurry with such conclusions?

We disassemble in detail

First of all, what kind of "failure" or "defeat" of Russia can we talk about if the character that was supported by it in the person of Khalifa Haftar showed character? His opponents just dutifully waved everything that they slipped. What does this indicate? First of all, the fact that the commander of the Libyan National Army feels both his strength and the strength of Moscow’s negotiating positions. By and large, you can understand it - during the ongoing civil war in Libya, a lot of blood was shed on both sides. But victory today is leaning precisely on the side of the LNA! And then suddenly the military commander, who is literally on the verge of his own triumph, is offered to lower his weapon, after which he begins to negotiate with pretty battered opponents almost as equals. Because, you see, "international standards" require this. In such a situation, “zealous will leapfrog” not only among the ardent oriental man, but perhaps also from the phlegmatic Scandinavian. This is for the Government of National Accord, which has been entrenched in Tripoli, whose legitimacy and legitimacy are very questionable precisely from the point of view of those very international norms and agreements previously concluded on Libya, the last hope of surviving was associated with Turkey’s direct military intervention in the conflict. However, menacingly rattling weapons in the best traditions of formidable Janissaries is one thing. But to run into a full-scale confrontation with Russia, the final quarrel with the European Union, and God already knows what “sharp condemnation” of Washington is completely different.

The presence of Recep Erdogan in Moscow and more than the compliant behavior of his “sponsored” with Faiz Saraj, proves this to the fullest extent. The maximum that was enough for the ambition of the head of the “burnt out” Libyan government was to act on a children's level, such as refusing to engage in direct dialogue with Haftar and even, seemingly, declaring that it was impossible to be in the same room with him. What a swell! As a result, the “negotiations” turned into a rather comical action, during which our military and diplomats had to take tricks very similar to trying to solve the children's problem of the wolf, goat and cabbage. It wasn’t enough for the clarification of relations to develop into hand-to-hand combat! Yes, Haftar left our capital quite unexpectedly, after taking the time “to think it over”, instead of continuing negotiations, having gone home. The reasons are assumed to be different: from the disagreement voiced by the marshal himself with the lack of a clear and concrete disarmament schedule for the PNS-controlled armed groups, to the allegedly advanced demands made by him, such as the immediate and unconditional surrender of Tripoli. Truth, presumably, lies in a slightly different plane. Those who are trying to reduce today's “alignment” in Libya to a confrontation in the format: “Haftar, supported by Moscow, against Sarraj, patronized by Ankara,” sin strongly against the truth. Everything, as usual, is much more complicated.

Here we should, first of all, remember that the East is always an unimaginable cunning of mutual interests and contradictions, secret and explicit alliances, understandings and claims. The simplest example - Khalifa Haftar, among other things, is a “favorite” for Egypt (as well as for the United Arab Emirates). At the same time, Egypt, for many years bloody and irreconcilably feuding with Israel, today begins with it a joint business to supply LNG to Europe, extracted at the Israeli Leviathan and processed by the Egyptians. In the future, the two countries will cooperate in the construction of the pipeline in the same direction. This all categorically runs counter to the interests of both Russia and Turkey, which got involved in the Libyan swara, for the most part, with the aim of concluding a new agreement on maritime borders with Saraj, putting an end to gas plans that had already imagined itself to be the new “energy superpower of the Middle East” Tel Aviva. How do you like the rebus? To quarrel with Egypt, which is one of the largest importers of our weapons, Moscow is completely out of hand. With Ankara - even more so. And their interests in Libya must be respected. It is high time to understand that modern diplomacy, especially in those cases when it comes to the East, categorically does not accept “head-on attacks”, straightforward decisions and schemes lying on the surface. Act in this way: whom it is primitive to buy, who to intimidate - and put pressure on everyone to get their own, regardless of anyone, in this region the United States tried. And where did it all come to? All around are enemies - except Israel, of course. Nobody believes and is not even particularly afraid. They point to the door without respect, even in Iraq ...

It would be extremely short-sighted and superficial to draw conclusions about what really happened in Moscow, on the basis of exclusively official reports and made available to us by far not complete versions of events. In the end, who can argue that Haftar flew away "in English", and not after a separate conversation and consultations with representatives of Russia, of which, of course, no one except those who participated in them is supposed to know? Pay attention to the rather calm reaction of our Foreign Minister Sergei Lavrov: they say everything is going according to plan, the Moscow meeting was only the "first step" before the talks in Berlin, which are scheduled for November 19. Perhaps, in this thesis one should look for an explanation: the Kremlin in this case does not want to make a ceasefire in Libya, similar to the Russian-Turkish “agreement” in a narrow circle, but makes it possible for the representatives of Germany, France and others participating in the upcoming event to join the laurels of peacekeepers . There, as far as we know, even the UN Secretary-General is gathering. It should not be forgotten that the next meeting in the “Norman format” is not far off, where the matter will not get by with general discussions. It was there that Vladimir Putin's support of Angela Merkel and Emmanuel Macron would be most welcome. Who knows - is not their involvement in the "Libyan question" part of some complex combination, namely, to achieve this goal and directed? Let's not forget - our president met with the Chancellor of Germany just a couple of days before the talks between Haftar and Saraj. On the other hand, there is no doubt - in the German capital, the Marshal will certainly not be given the opportunity for such outings, as in Moscow. And the ceasefire conditions may well become even less attractive ...

Let's be honest - the ability to build the right policies with the leaders of the East certainly includes the ability to put them in place from time to time. I will not exclude the possibility that the LNA commander really at the last moment decided to "get his own price", Well, the marshal is all the same. Yes, and age, you understand ... In Berlin, one must assume that his "dizziness from success" will decrease somewhat. On the other hand, if the Moscow talks really ended with “nothing”, and even more so with a “failure”, hell would be happening in Libya now. The assault on Tripoli is at least. Nevertheless, it is relatively quiet there now, which even the Turkish side confirms. This is the best evidence that events are moving according to some plan drawn up and implemented clearly not without the most active participation of Moscow. In conclusion, let me remind you of this: when in 2015 our country responded to the request of Bashar al-Assad and took a direct part in resolving the bloody mess there (at that time it was much worse than the current events in Libya), she also parties predicted a "crushing defeat." Militarily, diplomatically, in some other way ... Of course, there was talk of "throwing away money" and "the loss of remnants of international prestige due to the support of the dictatorial regime pursued by the United States." Well, and so on, in the same vein. Remembered? Well, where are all these "wise men" with their predictions now? That's it, right there ... The Syrian campaign has become not only Russia's largest military and foreign policy success in recent times. It completely changed both the geopolitical alignment and the attitude of so many countries to ours.

Libya is not Syria. Another country, other circumstances, other forces and people. And, accordingly, it is necessary to act here by other methods and ways. An understanding of this issue just does honor to our politicians and diplomats, who, it seems, have learned something. Will this be a new victory for Russia - we will see. But there is definitely no reason to talk about defeat.
Ctrl Enter
Noticed oshЫbku Highlight text and press. Ctrl + Enter
We are
How Ukraine break Putin's plan: six tips Zelensky
Putin's departure: how to prevent the collapse of Russia's foreign policy
Reporterin Yandex News
Read Reporterin Google News
Ad
We are open to cooperation with authors in the news and analytical departments. A prerequisite is the ability to quickly analyze the text and check the facts, to write concisely and interestingly on political and economic topics. We offer flexible working hours and regular payments. Please send your responses with examples of work to [email protected]
8 comments
Information
Dear reader, to leave comments on the publication, you must sign in.