Special operation "Ukrainian Boeing": Russia will have to answer for the downed plane 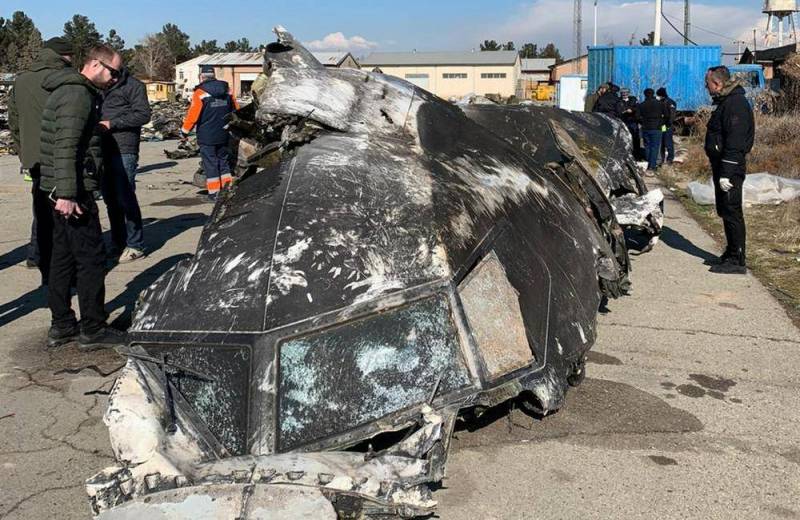 In truth, in recent days, when reading articles on the US-Iranian confrontation, published in various media, I was swept a bit. Some people continue (apparently by inertia) to repeat about some "blows" allegedly inflicted on the "imperial ambitions" of the USA, about their collapse "policy interventionism ”and the like. By the way, this is not only about domestic publications - there, French colleagues from Le Monde himself noted such a brave ode to the "victory of Tehran" that where our Kremlin mouthpieces take it ...


I'd like to ask: do you really don’t understand what is really happening right now, before our eyes ?! Alas, if we consider the situation in the Middle East with an open mind, consistently and at least with a minimum of objectivity, we have to admit: the game launched in Washington was a success. Moreover - now we are only observing its successful beginning. And will it still be ...

And Boeing all fall and fall ...

Strictly speaking, the firm conviction that the tragedy with the UIA plane crashed at Tehran’s international airport is nothing more than a brilliantly conducted operation of the special services, it is clear which country, which largely repeats the story of the Malaysian MH-17, has not left since the news of the crash . More than a strange recognition of Iran in the "unintentional" defeat of the airliner by an anti-aircraft missile (or missiles), such confidence was not only not destroyed, but strengthened a hundredfold. This is - if we consider the incident in conjunction with all other events, both preceding it and subsequent. The shelling of American bases is senseless and very sparing ... Immediately, as if on command (like ?!), riots broke out in Iran, their ultimate goal having no less than a change of power in the country. And, in particular, a touching and extremely timely appeal to Donald Trump’s “Maidan” there, containing a Farsi text: “Guys, I’m with you!” No sir, of course, no one prepared anything in advance! These are, so to speak, major milestones. But in general, if you “untwist” the chain of events from the very beginning, everything looks even more dirty: the United States with jewelery accuracy will eliminate a prominent Iranian political and military leader, who in his homeland was quite a splinter for many as by virtue of her own, irreconcilable and non-conformist views and actions, and because of more than extensive connections and opportunities. And then the uniform circus begins!

The missile strike on American bases in Iraq, perceived by many as a precedent for confronting the "world hegemon", ultimately turns out to be a natural "agreement." In any case, today the Pentagon representatives mockingly tell the whole world that they knew perfectly well about the upcoming “retaliation” of the business hours two and a half before it “collapsed” on them and managed to perfectly settle in comfortable bunkers in anticipation of the show. But just after that, the Ukrainian plane was crashing from the sky ... Iranian fighters, who were not able to inflict any significant damage on the American warriors, send two hundred people from almost all over the world in one fell swoop, "confusing" passenger plane with a cruise missile. Do you believe that ?! Well, your business ... But who said that a special operation, as a result of which well-defined military-political goals are achieved at the cost of destroying a civilian aircraft, must certainly be carried out by hijacking it, or, say, by detonating it with a predetermined charge or device? It would be a well-conducted operation. And here it is - with a missile, moreover, with a “necessary” missile in this situation ... Here we are already dealing with the aerobatics of a secret war, with a special operation organized perfectly. And even with a plus. All the tasks set have been achieved, and the United States, believe me, has just begun to realize the enormous benefits received from this combination. The most interesting is ahead.

So to paraphrase the favorite saying of the cinematic Red Army Sukhov, there is a strong suspicion that the threads of all the bloody and heinous action that we are observing do not extend to Washington alone. No, of course, the main puppeteers are there. But without the “puppets” obedient to him in Iran (and not only), all that had happened would never have been possible. We leave aside the purely technical oddities and inconsistencies regarding the incident with the Ukrainian plane. It seems “suddenly”, at the most necessary moment of the “missing” connection and professional qualities of the air defense soldiers who “did not make out” the difference between Boeing and Tomahawk. As well as completely inexplicable details such as obtaining a UIA airliner permission to take off in a situation where the sky of Iran should have been "cleared" of any potential random targets to the maximum ... Most likely, you need to look in a completely different direction. The one who carried out the launch knew very well who the rocket would hit - didn’t it occur to you? Alas, almost any person can be ironically motivated if necessary: ​​not to buy, so to intimidate, blackmail the lives of relatives, in the end. Is this unbelievable? Why, then! No less incredible, at least, than the distinctive “strings” that stretched from the Turkish military, guilty of a deadly attack on our Su-24 in the skies of Syria, to the participants in the “Gulen” conspiracy, which, again, was again a clear US special operation. Well, absolutely unbelievers are invited to simply recall the events in Iraq.

The American General Tommy Franks, who led all the coalition forces at the first stage of the invasion of this country, admitted without any hesitation: the United States simply bought the victory in this war. The “coolest” Yankees in this campaign were not paratroopers or seals, but groups that came into contact with Saddam's generals and offered them millions of bribes. After that, according to Franks, letters were sent to him in which these "die-hard fighters against American imperialism" swore eternal allegiance to the United States. And they surrendered the country, bastards! Almost without a single shot, given that, according to many military experts, the capture of Baghdad could have become a real Stalingrad for the American occupiers. Alas, the postulate that in the East any fortress will inevitably fall if the assault weapon, loaded with gold, was fair at all times and has not lost its truth today. It is very likely that someone in Iran, having decided to play some “undercover games” with Washington, simply overestimated himself and strongly underestimated the overseas “partners”. By the way, the “mopping up” of war leaders that have become uncomfortable for some continues under the guise: on January 11 in Iraq’s Karbala, the leader of the People’s Mobilization Forces, Taleb Abbas Ali al-Saedi, who was the closest associate of the deceased along with Kassem Suleimani Abu Mahdi al, was killed -Muhandisa. Without any Americans, mind you. Raging on the streets of Baghdad shouting “Down with the regime!”, “Death to the dictator!” and "We are now one!" (well, yes - “all at once bagato us”, “get gang” ...) the crowds simply were not “registered” in the original arrangement. But when did the US conclude such transactions without a double bottom and, moreover, honestly carried them out?

Russia will have to disentangle

The fact that the whole pile of unpleasant consequences of the bedlam which is happening now in the Middle East is awaiting just our country, there is no doubt at all. What will happen if the Maidan in Baghdad succeeds (and, unfortunately, there is every chance of it) and pro-American forces come to power in the country, I don’t even want to think. I will not get involved in historical parallels, but they are full. Those who wish can independently google, fortunately, there is plenty of material about the times when Iran was a country for us, to put it mildly, unfriendly. We add to this the enormous likelihood of a resurgence of ISIS or the emergence of a new, similar and no less “frostbitten” whole-head company - if in Iran there will already be a complete tear. But all this is still probabilities. But what is a completely inevitable and very lousy prospect is a powerful attack on Russian arms exports. Moreover, it will strike at its most successful segment - air defense systems. Here, some are discussing the wonderful prospects of "Iraq acquiring our S-400 air defense systems" ... They will now buy the bald line, not our Triumphs, after such a "successful" use of the Torah by their closest neighbors. Half of the Western media is already discussing the theme of “monkeys with a grenade,” stressfully stressing that the ill-fated Boeing was shot down precisely by a Russian rocket. Russian, Russian, Russian! After that, I won’t be surprised if in the very near future Washington will seriously raise the question of the embargo on the supply of any Russian anti-aircraft missile systems abroad.

Argumentation? It is crystal clear: “You look, to whom they give them in hands! To some terrorists ... ”Yes, plus“ authoritative experts ”will declare the same“ Torahs ”“ unreliable ”and dangerous. Iranians, in order to save the remnants of their own reputation, may well try to push the blame on machinerywhich "failed". Support for the ban on the supply of our air defense systems to anywhere in general from, at least, Canada and the UK, is guaranteed a little more than 100%. What will we do then? The worst thing in the events of recent days is that they turned everything that happened earlier upside down, completely reversed the “polarity” of the forces involved in the conflict. How now to argue with Trump, who declared the IRGC a “terrorist organization” - after the death of almost two hundred people from their rocket? Well, let's say that not only we understand the true background. Like there: “we know, the Germans know ...” But according to the rules and laws of Big Geopolitics, Iran was not something in a puddle - in a bottomless abyss. The United States inflicted more damage to Tehran with a single missile launched by its own air defense than if it had "ironed" this country with bombing and Tomahawks for several weeks or even months. Announced by the State Department, "full diplomatic and economic blockade ”of Iran is now unlikely to meet at least someone's condemnation and, especially, resistance. And here's another thing - if someone really hopes that the Americans will get out of Iraq, now you can forget about that. More than Washington’s unequivocal threats of blocking all accounts of Baghdad, coupled with the flames of a new war of all against all there, is a guarantee.

One has to admit - the United States not only masterfully seized the initiative in a hopelessly seemingly lost confrontation. They more than convincingly demonstrated to the whole world their readiness to further defend their position as a “world hegemon”, using all the same, many times tried and tested tools: eliminating objectionable leaders, bribing and terror, organizing “color revolutions”. Who has already taken a breath - they say the threat of war has passed? Do not build illusions - most likely, everything is just beginning ...
Ctrl Enter
Noticed oshЫbku Highlight text and press. Ctrl + Enter
We are
Ukraine from the inside: traitors, curators and those who watch from the Kremlin
Ten "defeats" of Putin
Reporterin Yandex News
Read Reporterin Google News
36 comments
Information
Dear reader, to leave comments on the publication, you must sign in.