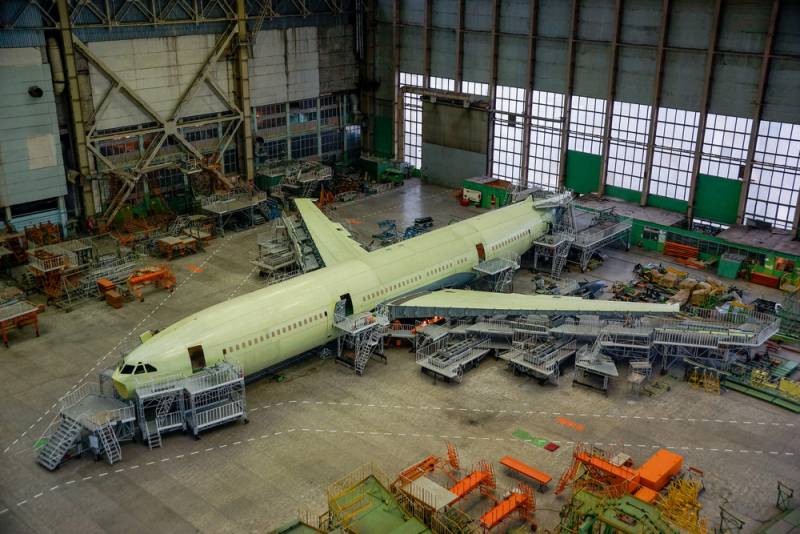 Russian aircraft manufacturers are moving on to the next stage in the process of creating the first modernized IL-96-400 passenger plane.


As follows from the message on the UAC website, the first flight prototype of the Il-96-400M passenger plane was handed over to the final assembly workshop:

The first flight prototype of the IL-96-400M aircraft was handed over to the final assembly workshop. Currently, the docking of the fuselage and wing consoles is completed. The next step is the installation of aircraft control systems and the installation of the interior.

The company was assured that the work on creating a new passenger aircraft was proceeding on schedule and the prototype assembly would be completed by the end of 2020, after which ground and flight tests would begin.

The designers claim that the IL-96-400M airliner will be assembled from domestic parts, and PS-90A1 engines of domestic production will be used as the power plant.

The electronic filling of the liner will also be from domestic equipment that meets the current and future requirements of the international aviation authorities for navigation, surveillance and communication systems.

Recall that the basis of the IL-96-400M is a Soviet and Russian passenger wide-body aircraft for medium and long-haul airlines, designed at Ilyushin Design Bureau in the late 1980s.
Ctrl Enter
Noticed oshЫbku Highlight text and press. Ctrl + Enter
We are
At the latest Boeing-777, the door flew out on tests
There are no difficulties with the Russian-Chinese CR929: the KLA denied rumors
Reporterin Yandex News
Read Reporterin Google News
5 comments
Information
Dear reader, to leave comments on the publication, you must sign in.