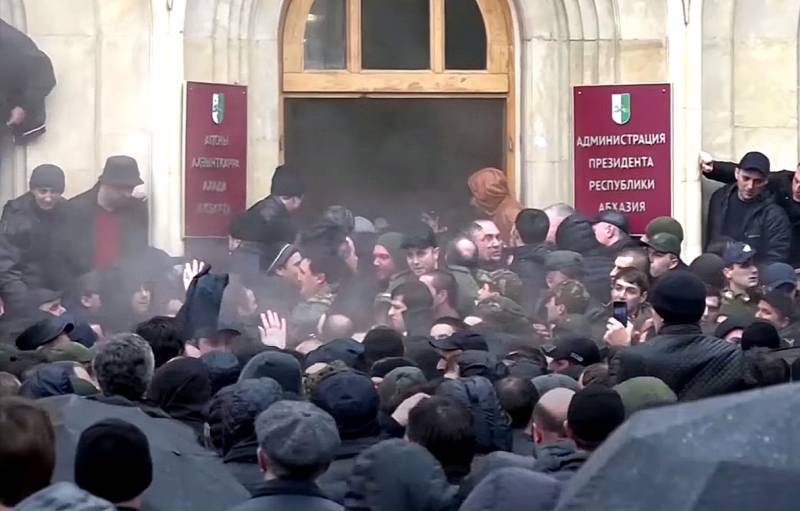 On January 9, 2020, riots broke out in Sukhumi (Abkhazia), against which the republic’s parliament adopted an appeal to the country's president with a proposal for voluntary resignation to prevent further aggravation of the situation. And now, they are already reporting from the republic that the participants in the protest rally, which was held near the walls of the local president’s administration, entered the building and opened the armory, from which “a certain amount of weapons” was taken.


The chairman of the Security Council of Abkhazia, Muhammad Kilba, informed about this. In addition, the opposition organized a headquarters near the presidential administration building and are not going to leave until the President of Abkhazia, Raul Khadjimba, leaves his post.

All cabinets were opened, symbols of state power were stolen, in addition, an armory was opened and a certain amount of weapons is on hand. Negotiations are underway, returned five units, but there are much more
- specified Kilba.

A headquarters has been organized, our demand is one - the resignation of the president. Our supporters are still coming. As long as we will stand here. New elections must be held, the country must be governed by a person who does not divide his people
- explained the member of the political council of the Amtsakhara party Ramaz Jopua.

It should be noted that the administration of the president of the republic calls what is happening an attempt at a coup. They clarified that the opposition left the legal field and switched to radical methods after it realized the futility of its claims in court. At the same time, the parliament’s appeal to the head of state there is called such that “it can complicate the situation” in the republic. By the way, 19 out of 27 deputies who attended the extraordinary session supported the appeal of the parliament.


One of the initiators of the action was Ahra Avidzba, who before that demanded the resignation of the head of the Ministry of Internal Affairs of Abkhazia, Harry Arshba. According to Avidzb, the protest is related to the fact that one of the detainees on suspicion of a resonance murder in November 2019 is allegedly an employee of the president’s guard.

It should be added that January 6, 2020 политическая the party “United Abkhazia” addressed the population of the republic and called on “to defend our Motherland” in order to protect it from the “mafia pyramid” led by the “illegally elected president”.

At the same time, the head of the Ministry of Defense of Abkhazia Mirab Kishmaria rejected the possibility of the army participating in the suppression of protests. In turn, the Russian Foreign Ministry called what is happening in Abkhazia an internal affair of the republic.
Ctrl Enter
Noticed oshЫbku Highlight text and press. Ctrl + Enter
We are
"Maidan under the British flag": in Hong Kong, protesters seized parliament
Mass riots in Hong Kong: residents storming the city parliament
Reporterin Yandex News
Read Reporterin Google News
5 comments
Information
Dear reader, to leave comments on the publication, you must sign in.