What is happening in the Middle East: “Turkish gambit” or “Russian blitz”? 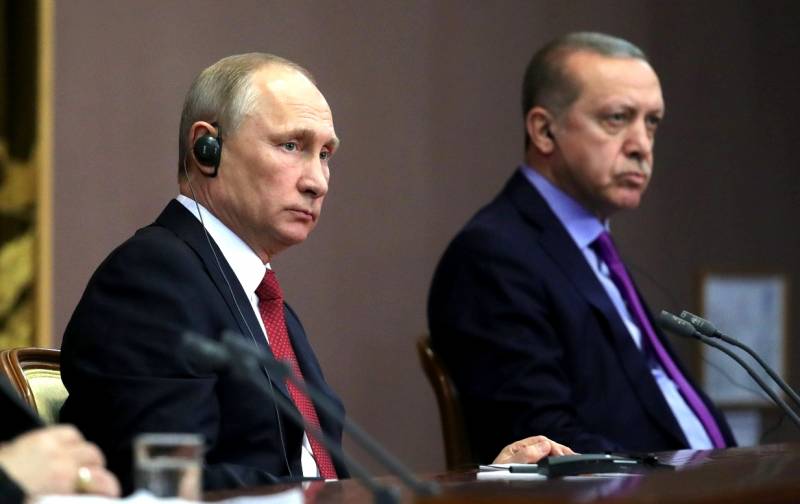 The meeting of the Presidents of Russia and Turkey on January 8 was a huge disappointment for all the haters of our country, both in the near and far abroad. Not only did Vladimir Putin and Recep Erdogan in a solemn ceremony start the work of the new Turkish Stream gas pipeline, they also made a joint statement at the end of the summit on the situation in Libya, which became for many vindictors a real bucket of ice water poured on the head. But what hopes were assigned by certain forces to the sultry sands of this country, where Moscow and Ankara would certainly, in their opinion, “collide”! But what is there - “grabbing one another's throats”, getting together in a bloody battle and forever burying the so furious, primarily overseas “hegemons”, Russian-Turkish alliance. It didn’t work out ... Why did this happen and what could be the further development of the situation?


Before we begin a detailed analysis of the sophisticated geopolitical “party” that Moscow and Ankara are conducting today in the Middle East, we need to mention the following: the global “redistribution” of spheres of influence in this region is now possible after a series of serious foreign policy and military strategic miscalculations approved there by the United States. It was they who led to a whole chain of more or less obvious defeats of Washington in the same Syria or Iraq and their loss of influence even on those Middle Eastern states, which until recently were not allies, but a real "patrimony" of the Americans in which they could dispose literally at home.

In filling the emerging “vacuum”, which in this explosive region is always fraught with chaos and upheaval, Russia and Turkey have achieved the greatest success. China, which has been quite successful lately economic expansion into the Middle East, either did not take into account one of its most important realities - the inability to control anything there without ensuring a real military presence in the region, or did not consider it necessary to take such a path. Well - with the "players" and the "board" decided, now let's talk about the moves ...

How to quarrel them ?!

According to the plan of the overseas “players”, imagining themselves grandmasters, Syria was to become the scene of a bloody clash between Russians and Turks. I will not delve into the dramatic and even tragic details of those distant days. We all remember them perfectly. After November 24, 2015, our countries were indeed on the verge of a military confrontation. However, there was enough wisdom on both sides to ensure that the confrontation did not turn into an armed conflict. Now you can blame Putin for “costing tomatoes” (forgetting about the president’s command to destroy the hell “any threats to the Russians in Syria,” regardless of their nationality), but further events have shown that the right the critical moment was precisely the line chosen by the leadership of our country. Tough enough, but leaving the parties an opportunity for political “maneuver” and reconciliation. The best proof of this can be considered at least the fact that the attempted military coup in Turkey, undertaken with the filing of the United States, occurred just a month after Recep Erdogan, reconciling his immense pride, went to reconciliation with Moscow. They decided to remove as if they couldn’t do it, but they didn’t attack ... And now the Russian air forces destroy the terrorists together with the Turkish air force, and Syria, instead of the arena of confrontation between the two countries, becomes the first springboard for their military cooperation. The operation "Olive Branch", launched by Ankara last year, does not live up to Washington’s hopes, deliberately exposing the Americans for a long time to consider the Americans as Kurds’s allies. Collision does not occur again ...

As a “separate line" in this whole situation, it is certainly worth mentioning Turkey’s purchase of Russian Triumph S-400 air defense systems. Again, I will not list for the thousandth time all the vicissitudes that accompanied this weapon of the "contract of the century" and accompany it to this day. I will confine myself to stating the main thing: the efforts spent by the United States to disrupt the deal would probably be enough to organize an expedition not only to Mars, but to a neighboring galaxy. And all to no avail. A terrible blow to self-esteem ... And how much damage this Ankara’s unprecedented “trick” caused to the “indestructible unity” of the North Atlantic Alliance, for which it has always been “hope and support” in the Middle East region, is out of the question. In fact, Turkish “self-will” was one of the first signs that NATO, as they say, is bursting at all seams. Interestingly, not so long ago, a number of publications with a rather dubious reputation and very clearly tracked “roots” made an enchanting informational “stuffing”: it turns out, Turkey has long ago “created a research group to study the S-400 together with the Pentagon.” Its experts literally “take apart” our air defense systems and are about to “crack their secret codes” (by golly, that’s exactly what it says!). After that, the Americans can easily “intervene in the operation of the Russian air defense systems” when and as they wish! A good attempt, yes ... True, in order to achieve at least minimal credibility, it was not worthwhile, referring to some unnamed "American media", to try to claim that this same "joint group continues the S-400 research" for the past year. In time does not converge! Deliveries of the first components of the SAM system began less than six months ago. However, such attempts here indicate an extremely great desire to drive a wedge between Moscow and Ankara in this matter at virtually any cost.

Libya as a last chance

Great expectations for those who want to destroy the Russian-Turkish alliance lay on the civil conflict that erupted with renewed vigor in Libya. And the grounds for such hopes were, and quite weighty. Moscow and Ankara initially supported in it two opposing sides. “Our man” is considered the commander of the Libyan National Army, Marshal Khalifa Haftar, whose forces today already control about 80% of the country's territory. Turkey, on the other hand, not only supports the Government of National Accord, which is heading in Tripoli, led by Faiz Saraj, but also at the end of last year concluded an agreement with him on military assistance, according to which the transfer of Turkish troops has already begun to Libya. Why did Erdogan, who initiated this risky demarche, need this? Most likely, the extremely ambitious leader not only aimed at quite considerable reserves of Libyan oil, which, by the way, at the moment is mainly controlled by Haftar forces, how much he decided to use the conflict in this country in order to try to seize the strategic initiative from Russia to build military-political influence in the region. Hence the passionate talk about the allegedly “thousands of Russian PMC fighters” there and all the similar attacks on our country. Well, here, it would seem, a collision is absolutely inevitable! Russians and Turks can’t disperse in any way. Many Western media, reveling in anticipation, have already begun to write about the upcoming "Libyan trap for Putin." There it was ...

In a joint statement made on January 8, the two presidents not only announced a complete ceasefire in Libya starting January 12, but also stressed that they had reached "full understanding" on the agenda there. The most important details indicated at the same time irrefutably testify - the parties agreed on the terms of Russia! The most important, as usual, is in the details. In this case, in the words of the leaders that the settlement in the country will be based on the Libyan political agreement concluded in 2016, also called Shiratsky. So - according to the letter of this agreement, the PNS Faiz Shiraj cannot be considered legitimate at all! The shirati agreement clearly defines his term of office, which has long expired - two years. At the same time, it should be noted that the members of this "pervasive" government at the official level have already expressed support for the agreements of Vladimir Putin and Recep Erdogan. What else remains for them? However, all this in no way also means the automatic victory of Haftar, on whose side today stands the only more or less legitimate authority of Libya, the parliament there. Surely ahead is a long way of difficult bidding, mutual compromises and attempts by each of the parties to insist on their own. Now it’s hard to say what means were put into use by Vladimir Vladimirovich for such a quick and decisive conviction of not the most complaisant opponent. Well, besides the well-known personal charm. Perhaps the point here is that for Erdogan in the agreements with Shiraj, the invitation to a civil war is much more important, but the new demarcation of maritime borders, which is extremely beneficial for Ankara, giving it grounds for claims for offshore energy fields? Suppose he received guarantees that the new government, represented by Haftar (or anyone else), would confirm them, and not denounce. That would explain a lot, if not all.

There is no doubt that a number of factors contributed to the decrease in the militancy of the Turkish leader. Let's be honest - Haftar’s troops are not Kurdish rebels in any way ... Turkish troops today are already losing in Syria, but in Libya the death toll would be many times higher. It would certainly not have contributed to strengthening the image of Erdogan, which had somewhat shaken recently, recently. In addition - the prospect of quarreling with a good half of the Arab world. The same Egypt and the United Arab Emirates, the Libyan "peacekeeping" initiatives of Turkey categorically do not support. Well, and, again - a conflict with Russia. And this is after the launch of the Turkish Stream, which brings Ankara undoubted benefits not only of an economic, but also of a geopolitical nature. Apparently, our leader made it clear to Turkish that in future disputes, which will inevitably flare up in the Mediterranean in the very near future, Russia will be on his side. Why not? For our country, this has very interesting prospects. At least as a mediator between the main potential parties to the conflict - Turkey, Greece and Israel. One way or another, but on the basis of the positions voiced by the presidents, there is no doubt who left behind the victory in the blitz game played on January 8.
Ctrl Enter
Noticed oshЫbku Highlight text and press. Ctrl + Enter
We are
Ukraine from the inside: traitors, curators and those who watch from the Kremlin
Ten "defeats" of Putin
Reporterin Yandex News
Read Reporterin Google News
9 comments
Information
Dear reader, to leave comments on the publication, you must sign in.