Presented the first laptop with a folding display Lenovo 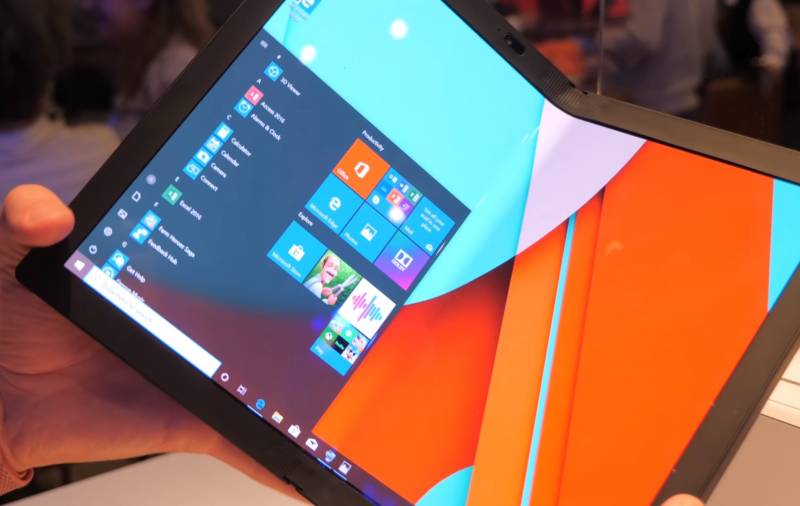 A hybrid laptop with a Lenovo ThinkPad X1 Fold tablet is officially unveiled at CES 2020. As stated in numerous announcements, the device received a flexible display, like the Galaxy Fold from Samsung or Mate X from Huawei.


The device is equipped with an OLED display with a diagonal of 13,3 inches and a resolution of 2048x1536 pixels. The uniqueness of the new gadget lies in the fact that it can be used not only as a flexible tablet, capable of changing its size, but also as a laptop.

If you bend the ThinkPad X1 Fold to the end and put it on the table, then it can easily perform all the functions of a traditional laptop. To enter characters at the bottom of the device, a soft touch keyboard is available. However, lovers of "mechanical" keys can additionally purchase a wireless compact keyboard with magnetic mounts that allow you to fix the input device on the bottom "shutter" of the device.


The “heart” of the brainchild from the Chinese brand will be Intel's custom 10-nanometer Tiger Lake chip, which was also introduced in Las Vegas. As it became known, the processor received a new Intel Xe graphics, which promises to bring the performance of integrated video cards to a fundamentally new level. The device will operate under Windows 10 Pro.

According to Lenovo representatives, the new product will go on sale in the summer. The approximate price of a new format computer is $ 2499.
Ctrl Enter
Noticed oshЫbku Highlight text and press. Ctrl + Enter
We are
Lenovo is preparing the world's first laptop with a flexible screen
Samsung will have a 13-inch flexible tablet
Reporterin Yandex News
Read Reporterin Google News
Ad
We are open to cooperation with authors in the news and analytical departments. A prerequisite is the ability to quickly analyze the text and check the facts, to write concisely and interestingly on political and economic topics. We offer flexible working hours and regular payments. Please send your responses with examples of work to [email protected]
2 comments
Information
Dear reader, to leave comments on the publication, you must sign in.