Union vs USA: Merkel’s visit to Moscow may become historic 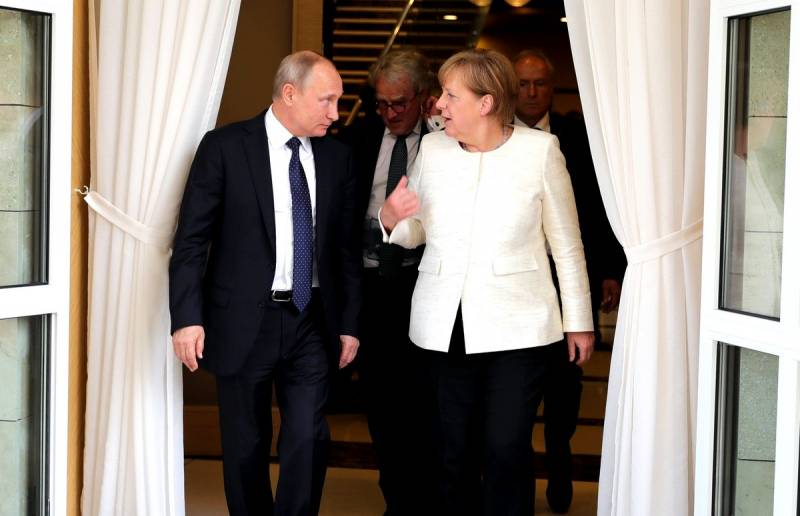 The upcoming meeting of German Federal Chancellor Angela Merkel and Russian President Vladimir Putin this week has every chance of becoming a historic event. Without exaggeration, she can change the fate of the world. Yes, on the bright holiday of the Nativity of Christ, I so want to dream about something good and bright ... But in this case, it is not just a dream, but rather objective prerequisites for just such a turn.


Recent events in the Middle East have essentially become a feature beyond which all significant geopolitical players will have to make a choice (others will make it for the rest). On the other hand, the American missiles that hit Baghdad are the same notorious last straw, which, quite possibly, overflowed Berlin’s patience, forcing it to radically change its course. In any case, at a time when the world is balancing over the abyss, the head of Germany is not rushing to Washington, but to Moscow ...

According to the information available today, the meeting was initiated by our president. And Frau Merkel, apparently, accepted his invitation without the slightest hesitation! According to the Kremlin’s press service, the main topics of the talks should be the situation in Syria and Libya, and in the Middle East in general - naturally, in the light of the provocative US airstrike. Questions of Ukraine, implementation of the Minsk Agreements, as well as prospects for Russian gas supplies to Europe will not be ignored. Surely, we will talk about the "Nord Stream-2". An interesting list of topics, right? In principle, practically for each of them individually, leaders would have enough telephone conversation to achieve mutual understanding. But taken in combination, they look completely different. And you know why? All the issues mentioned above have one thing in common: the interests of Russia and Germany on them coincide, as a rule, completely. And in almost all cases, they are exactly 100% contrary to the intentions and aspirations of the United States.

The pirate raid of American vultures, carried out by them on January 3 to commit another political assassination, has already "backfired" Berlin in the most unpleasant way. The United States again framed its own NATO allies, as they say, without batting an eye. Jens Stoltenberg today can make as many excuses as he wants, insisting that "this was a decision of Washington, not the North Atlantic Alliance." According to the well-known proverb, the enraged and hungry for revenge, the warriors of Islam, in which case, will not be on a passport, but on a face without a beard. But in Iraq today there are about 120 soldiers of the Bundeswehr, who are staying there as part of the operation to combat ISIS and are engaged in training the local military. Accordingly, killing Iranian and Iraqi militarypolitical leaders, the Americans put their lives on the line, while not even thinking about not only asking Berlin for the operation, but also notifying him of it. It is not surprising that today Germany, at the level of the official representative of the government of the country, Steffen Seibert, has already declared its readiness "to accept any decision of Baghdad" and to carry out the withdrawal of its own military contingent from the country, which showed the door to all members of the "Western Coalition" as soon as possible. Yes, at the same time, both he and the head of the German defense department Annegret Kramp-Karrenbauer bitterly complained that such actions "would damage stability" in Iraq, as well as will not contribute to the further fight against terrorism. However, the Germans definitely do not intend to die because of the American foolishness.

Some of the analysts have already suggested that Angela Merkel (and in her person the entire European Union) is turning to Vladimir Putin, hoping that he, as a person who has direct contacts with the Iranian leadership and has a certain influence, will be able to convince Tehran "not to flog a fever", not to make hasty military decisions that threaten irreversible consequences. A flattering version, of course, but not too vital. The willingness of the Iranian side to heed the advice and recommendations coming from Moscow is not as great as the Europeans would like. And, by the way, one of the main "connecting links" between our countries was just Kassem Suleimani who was basely killed on January 3. Proceeding from this, it must be assumed that the intentions of the German leader are much more far-reaching than a simple search for a reliable mediator in a crisis situation. Something needs to be decided at the global level. Berlin, of course, can remove its own soldiers from the Middle East "nacht vaterland". But whether the country will survive the next wave of refugees and migrants who, along the long-beaten path, will rush from there to the well-fed German lands, if the region flares up "like an adult" is a big question. Germany has already cost dearly the flows of "forced migrants", which caused a huge number of problems there, both social and economicand political. She will most likely not be able to “digest” another such "invasion" under any circumstances. So Trump's desire to fan a new "world fire" may well become a verdict for the German state.

It was not in vain that the Russian Foreign Ministry commented on these words of their colleague, German Foreign Minister Heiko Maas, with very caustic irony. It’s necessary to show such exceptional caution and correctness, daring even a little, just a little bit to “criticize” the boorish and frankly illegal actions of the United States! Let me remind you that Herr Maas allowed himself to timidly note that the policy of “persuading Iraq with threats, not arguments” is unlikely to “work” after the finally enraged head of the White House threatened Baghdad with “unprecedented sanctions” for the decision to expel American warrior. Do you know what's the funniest thing about this situation? The fact that Germany, in fact, is one to one in the same position as Iraq: the country is full of American military bases, causing persistent irritation and rejection of an increasing number of Germans. The only difference is that Germany was bombed, destroyed and occupied by the United States more than half a century earlier than Iraq. So what signal is Trump sending to the Germans, stating that he does not intend to remove his thugs from the Middle Eastern country under any guise, and at the same time exposing Baghdad a multi-billion dollar bill "for protection" ?! This is after the American invaders had only pumped out oil from the country and removed historical artifacts for absolutely unaccountable sums! I am not even talking about hundreds of thousands (according to some estimates - more than a million!) Peaceful Iraqis killed by the "liberators" ... So, I wonder what awaits the Germans if one day they want the Yankees with their bases, bombs and rockets rolled from their land to hell? Also "unprecedented sanctions" ?! Or are there new bombing strikes on Dresden at once?

Not so long ago, German Deputy Foreign Minister Niels Ahnen spoke much more openly than his own boss, who bluntly pointed out that Europe today, more than ever, needs "mechanisms of protection against US extraterritorial sanctions that do not take into account the strategic interests of the EU." This was said, as you might guess, about the last "run over" of Washington on the construction of "Nord Stream-2". And, by the way, according to the same John Kerry (ex-head of the US State Department), widely quoted by the American media, the EU's retaliatory measures in the form of counter-sanctions against the United States are "only a matter of time." Presumably, the current escalation in the Middle East can speed up the process at times. The Europeans culturally and civilized tried to neutralize Washington's thoughtless attempts to bring Tehran to its knees by bringing down its economy. They tried, they created INSTEX (in which, again, Germany played one of the first violins), persuaded, went for tricks - everything so that only Iran would not get out of the "nuclear deal". So what?! The inadequate Donald turned all their titanic efforts to dust with one missile strike. Today Tehran has already announced its complete renunciation of its nuclear-free status and any obligations in general. The example of Gaddafi, you know, is very memorable ... The Europeans are more and more convinced that all attempts to resolve issues with the United States in an amicable way sooner or later turn into the most severe disappointment. All these years, all of them, including Berlin, dutifully followed the United States in the anti-Russian political "channel". They imposed sanctions on themselves at a loss, lost money, ruined relationships and ruined their own business. Or maybe that's enough ?!

If at the dawn of the “Trump era”, both the newest owner of the White House, and his lunatic team, for the most part consisting of tipuses with obvious manic inclinations like Pompeo, were compared with a flock of elephants frolic in a china shop, now this image no longer reflects reality. Rather, it’s a gang of violent lunatics with torches breaking into the powder warehouse to “anneal” it, and it’s very bright ... A drag organized by Angela Merkel, the former head of the German defense department, who blurted out something about sending German military to the Kerch Strait ships and planes have not been forgotten. “Are you proposing to fight the Russians ?!” I wonder what emotions the chancellor of Washington’s intentions to provide anti-ship missiles and combat drones to Ukraine this year provoke Frau Chancellor? And specifically for use against the Russians! But it is precisely such, word for word, the plans were recently announced by the former US Chargé d'Affaires to the “non-fallow” William Taylor. In public, from the TV screen, completely without repairing or stewing ... They will not calm down until they arrange another war, preferably in Europe! Twice in human history the so-called “Anglo-Saxon world” succeeded with great success. And both times, the British and Yankees pushed just the Germans and Russians against their foreheads, who suffered major human and material losses in world wars, fabulously enriching overseas ghouls. If Russia and Germany, united, put an end to such attempts once and for all, this will truly become the highest manifestation of historical justice.
Ctrl Enter
Noticed oshЫbku Highlight text and press. Ctrl + Enter
We are
How Ukraine break Putin's plan: six tips Zelensky
Ten "defeats" of Putin
Reporterin Yandex News
Read Reporterin Google News
65 comments
Information
Dear reader, to leave comments on the publication, you must sign in.