Elimination of Iran's top officials: what lesson should Russia learn 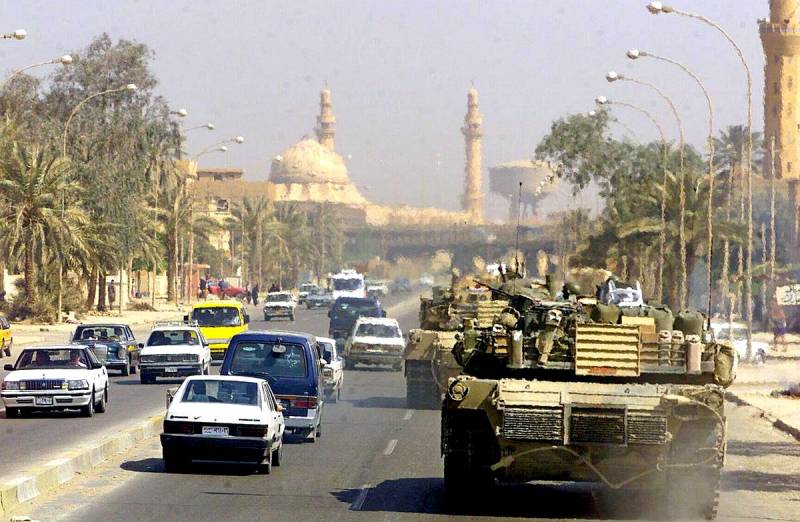 The new year 2020 began to match its predecessor - with the roar of rocket explosions, blood and deaths, with mass protests and a sharp aggravation of military danger. While there is an exchange of new reproaches and threats between Washington and Tehran, while the Middle East is balancing on the very brink of armed conflict for a long time of unprecedented proportions, it’s time for you and I to take a closer look at this situation and try to draw conclusions from it. Moreover, not immediate, concerning exclusively the immediate actions of our country at the Middle East Theater in the prevailing circumstances, but far-reaching and relating specifically directly to Russia.


I’ll make a reservation right away - everything written below is addressed primarily to those stubborn followers of “Thomas the Unbeliever,” who, in any discussion of the topic of our possible military confrontation with the United States, are accepted to insist: “This cannot be, because this can never happen!” I do not strive to “intimidate” or “propagandize” anyone. I just want to remind once again: alas, we live in a time when the implementation of even the darkest and most incredible at first glance scenarios cannot be discounted. A stubborn reluctance to take threats that seem unrealizable for granted may subsequently cost too much. I will not give historical parallels - they already lie on the surface ...

Logics? What are you talking about ?!

The US missile and bomb strike on the outskirts of Baghdad on January 3, which claimed the lives of an Iranian general, commander of the IRGC Qasem Soleimani and the head of the People's Mobilization Forces of Iraq, Abu Mahdi Muhandis, is an outstanding example of military-political idiocy, no matter how you look at it. And the point here is not even that, as it turned out, the decision to inflict it was made by Donald Trump despite the current intelligence data and the opinion of high-ranking officials of his own administration, who tried to convince him that there was no "inevitable" attack on the American diplomatic and military facilities of Soleimani in reality did not plan. It is rather about the long-term, strategic prospects for this unprecedentedly arrogant and defiant cannibalistic act. I will not retell all the critical assessments that fell on the head of the White House from my own compatriots, including politicians of the highest rank, I will confine myself only to a statement of fact that is common to all of them: the president in one fell swoop canceled all attempts by Washington for decades to build some acceptable order in the Middle East. I must admit that it didn't work out very well without that ... And now - at least take out the stars and striped flags. And even from those countries where they were tolerated until recently, albeit reluctantly.

At the time of this writing, the Iraqi parliament has already decided to break the military assistance agreement concluded with the United States in 2008 and to withdraw all foreign troops from the country. “Go home!” - And not only the Yankees, but also all their allies in the coalition created to fight ISIS. Come on ... Official Baghdad no longer wants to see a single soldier from the West on its territory. If Mr. Trump, killing Suleimani, hoped to “undermine” or “undermine” Tehran’s power, which the Americans call the regime, then the effect was achieved by them, admittedly, the exact opposite. Iran is experiencing an unprecedented patriotic upsurge, the country's citizens rallied even closer around its spiritual and military leaders, burning with anger and thirst for revenge. The thousands of people who escorted Sulejmani to the last journey with the cries of "Death to America!" Especially when you consider that the first missiles at American targets in Baghdad have already arrived, and Al-Shabab militants have already made a “courtesy visit” to the US military base in Kenya (used as an airfield for the Air Force). And this, for sure, is just the beginning. In any case, General Hossein Dehgan, the military adviser to the Iranian leader, promised Washington a "thoughtful, timely and wise" reaction with a "decisive restraining effect." It is entirely possible that 3 and a half thousand American soldiers hurriedly transferred to the Middle East are going to die there ... And, by the way, anti-war demonstrations began already in the USA itself. And former senior CIA officials, such as Michael Morell and Leon Panetta, directly say that Trump’s trick will cost the lives of many “peaceful Americans.”

“Slam the door” so that the house collapses

Some of the analysts, who today are for the most part in complete bewilderment about the premises of this attack, bordering on insanity, are trying to discover some "secret motives" in the actions of the same Trump. Well, for example: "he wanted to raise his own rating during the election campaign." Again it turns out nonsense ... It is not surprising to imagine what could have done more damage to his image than the murder of Suleimani and the prospect of war and terrorist acts resulting from him. But so far not a single coffin wrapped in "stars and stripes" has arrived in the USA! But if the president decides to continue in the same spirit, they will go in a stream. A "small victorious war" with Iran does not shine for the Americans in any case. There is, however, another version: they say, Washington decided, seeing the failure of its own foreign policy in the Middle East, and realizing the inevitability of leaving there, to firmly "slam the door" goodbye. Wow "cotton"! The result will most likely be the complete collapse of even that extremely flimsy "security architecture" that was in this "powder keg" of the modern world. In fact, this is already happening. The "mission to combat ISIS" of the Western Coalition has been officially suspended, the US allies hastily scaled back their own military presence in Iraq, NATO is convening an extraordinary meeting. The next step is a wonderful performance at the UN, where Tehran turned with an angry protest about everything that was happening. It is very interesting how this organization will behave this time, long ago turned into a submissive puppet of Washington? Will he pretend again that "nothing terrible" is happening? In this case, it may well be the beginning of its end.

If somewhere it’s worth looking for at least some reasonable explanation for Trump’s decision, then rather, as usual, in the field of economics. More precisely, in the industry’s favorite president: energy exports. No, really, it’s not without reason that the recently resigned US Secretary of the Economy Rick Perry declared Donald Trump “God's chosen ruler” at the end of last year, placing him higher than the “Bible kings”! Not one of the White House residents had such an obsession with the idea of ​​making the United States not just the main, but, it seems, the only exporter of oil and gas on the planet. Most likely, the adoption of the fateful decision of the president was prompted, for example, by the statement of Iranian vice president Eskhak Jahangiri that the country continues to sell its oil “in other ways”, contrary to the “US pressure and sanctions imposed by them” made in December. And also - the accession of Sweden, Denmark, Norway, Finland, as well as Belgium and the Netherlands to the INSTEX system, specially created by Germany, France and the UK to trade with Iran, bypassing US sanctions. And not only as participants, but also shareholders. In fact, all of this taken together means nothing more than a complete failure of Washington’s sanctions policy on Tehran. So the “last argument” of those who stubbornly continues to consider themselves the kings of the present world was launched. And here we are, in fact, approaching the lessons that Russia should learn from current events.

Unfortunately, the irresponsible and adventurous actions of the current US leader, who made the decision and ordered the liquidation of Suleimani, without coordination with Congress and members of its own administration, not to mention some “NATO allies” there, clearly indicate that Trump is really capable of any, wildest antics. Therefore, any references to the "international community", as well as references to any "framework" and "rules" that the United States allegedly adheres to in their actions, can now be safely thrown away in the trash. In my opinion, Sergey Lavrov put it best of all on this score, who sorted out what happened from the point of view of just international law: the destruction of an official, the head of a completely official military formation of a UN member state in the territory of a "third country" ... The head of our diplomacy very diplomatically called all this “a flagrant violation of generally accepted principles” of precisely the very right that Washington so much loves to refer to and out of place, and “illegal military actions”. In fact, the January 3 missile strike is a milestone in the evolution of American foreign policy, and, without exaggeration, a milestone. From now on, all conventions and even the appearance of decency have been discarded. The demonstrative liquidation of the Iranian general is nothing more than a US application not just for leadership in today's world, but for the leadership alone and not disputed by anyone. The exclusive right to execute and pardon anyone and anywhere at their sole discretion. And who can say that they will act differently with regard to Russia?

You will say: "We have nuclear and hypersonic weapons, but Iran does not." Right. However, to sink the American aircraft carrier, and with luck, also in the company of a couple of military ships with a smaller caliber, the Iranians can quite. At least theoretically, in terms of the level of available weapons. The fact that the Russian “Vanguards” hit Washington and New York, they do not categorically believe there. At the same time, judging by recent events, they are quite ready to risk (or even knowingly sacrifice) a thousand - another - third of their own military. For very doubters, I’ll remind you that the United States is currently seriously considering (at the level of Congress and the State Department) the issue of recognizing the Republic of Donbass as "terrorist organizations." Suleimani Trump has declared "the number one terrorist in the world" already posthumously, but here, it seems, they are trying to fumble in advance. I’ll propose only one possible scenario: such a confession takes place, and then a delegation of the DPR or LPR goes to the Russian Crimea, which the United States stubbornly considers to be “illegally occupied territory”. What will be the actions of Moscow if the same “Hellfires” as those who killed Suleimani fall upon Simferopol Airport ?! I sincerely hope that no UAVs or even F-1s will break through our air defense system there. But what if they try to break through and strike? It is very interesting whether an appropriate plan has been developed for such a specific case? And if so, what department: Shoigu or Lavrov? What will follow in response: crushing retribution or “expression of deep concern”? Personally, I have no answer to these questions.

Trump, for sure, does not seek a full-scale war with Tehran. He's just trying to "make America great again." As usual, killing and destroying someone. The US is not eager to occupy Iran. Their goal is to “nullify the oil export” of this country. With regard to Russia, one-to-one plans are the same. Sooner or later, convinced of the futility of sanctions, they will try to “educate” us in exactly the same way. Unless we learn the current lesson ...
Ctrl Enter
Noticed oshЫbku Highlight text and press. Ctrl + Enter
We are
Ukraine from the inside: traitors, curators and those who watch from the Kremlin
Ten "defeats" of Putin
Reporterin Yandex News
Read Reporterin Google News
102 comments
Information
Dear reader, to leave comments on the publication, you must sign in.