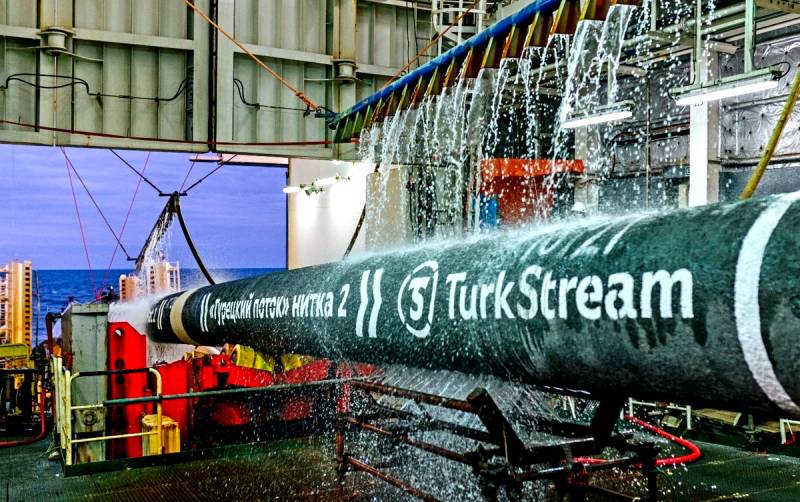 Amid joyful News about the complete readiness for launching one of the most important energy projects in Russia - the Turkish Stream gas pipeline, which carries our "blue fuel" to Europe, statements from the ocean, as usual, are a pretty "fly in the ointment" in this pre-holiday "barrel of honey" . And even, frankly, not with a spoon, but with a capacity of a much larger volume, capable of not only seriously spoiling the prospects for the supply of domestic energy to the main market for their consumption, but also plunging the Mediterranean region into a large-scale and bloody military confrontation with poorly predicted consequences.


Washington once again proves that it will not stop at nothing on the path to realizing its goal of ousting Russia from world energy markets. In the most literal sense ...

We are talking about the adoption by the US Congress of a "set of measures", the purpose of which, without any hindrance, is proclaimed "the United States taking the place of a key player in the gas market in the Mediterranean region" and, of course, "a significant weakening of Russia's position in this region." Neither more nor less ... Methods to achieve these ambitious goals are proposed, frankly, quite peculiar. On the whole, according to the congressmen, the main emphasis will be on "strengthening ties with Israel, Greece and Cyprus in the areas of security and energy", but the specific points of the alleged "cooperation" make one doubt that the word "security" in In this case, it is generally appropriate. The US, first of all, is going to lift the arms embargo on Cyprus, which is in a state of "frozen" Turkish-Greek conflict, and in addition "expand military assistance for Greece." Senator Bob Mendeses, who belongs to the category of Capitol Hill residents who have itchy hands with a fire and a sword to defend “national American interests”, ignoring the consequences, has already stated that the decisions made are nothing more than “the dawn of a new day for policy USA in the Eastern Mediterranean. " Your will, Mr. Senator, only in the current geopolitical “alignment” over the region you have mentioned, we will soon see the flames of fires than any kind of “dawn”. According to the tension accumulated there, the Mediterranean is already quite comparable to a powder keg. Washington is in a hurry to stick a flaming torch into it ...

War, as you know, is a continuation of “other means” of politics. Or, which is even more relevant these days, economics. This is a common truth. However, no less axiomatic is the fact that any armed conflict, even for the most powerful country, carries a whole range of inevitable risks, from purely military to foreign and financial. What factors compel the United States to take steps that almost inevitably lead to military escalation in the Mediterranean? First of all, here, perhaps, it is worth mentioning that the "gas expansion" of the Americans in Europe today is developing, to put it mildly, not in the most successful way. Yes, LNG imports in the Old World really didn’t just grow, but soared, increasing by 75% in the third quarter of this year, compared to the same period last year. “Well-wishers” of Russia like to mention this often and with great “relish” (especially in Ukraine), however, they are silent about another point: during this time the USA did not increase its export even by half a percent, moreover, it “slipped” in the ranking of liquefied gas suppliers for Europeans from third to fourth, losing to Nigeria! Russia, as before, ranks second in terms of export volumes after Qatar. Of course, the “reins” that fell under the tails of the presidential jacket are the upcoming launch of the Turkish Stream, which will further shift the balance towards our country. There are other reasons prompting Washington to act extremely tough and quick, but we will talk about them a little lower.

Today, the Mediterranean region, and, to be absolutely exact, its natural resources, and, above all, energy reserves, are in a stage of extremely intense redivision. And the United States is extremely displeased with the results. Thus, the Syrian government announced the start of large-scale exploration work to find new oil and gas fields that will be carried out on the Mediterranean shelf. In "close cooperation" with the relevant Russian companies, of course. Recall that the contract with our company Soyuzneftegaz for the exploration of energy deposits in Syrian territorial waters was signed back in 2013. The war is almost over - it's time to get down to peace. However, Washington’s recent distinction between Turkey and Libya (represented by the Government of National Accord (PNS) led by Fayez Sarraj), the distinction of the sea zones, according to the results of which the Turkish side claims to those parts of the Mediterranean bottom that consider Cyprus and Greece. Quarrels and conflicts between Ankara and Athens over the extraction of mineral resources off the coast of the “disputed” island have been going on for a long time, but recently they have gained a special intensity. It has almost reached the “pushing by the sides” of exploration vessels in waters, which both Greeks and Turks consider to be their own exclusive economic zone. Representatives of world energy companies interested in developing the shelf appeared the first there, with the filing of the Government of Cyprus, and the Turks made a “retaliatory move”, despite the threats of sanctions that were distinctly heard from the European Union.

Is it in such a situation that military ships will replace the peaceful ships of geologists? Not at all, especially when you consider that for some time now, at least one of the parties to the conflict - Athens, the United States has been pushing for a "force" solution. Naturally, with today's balance of power, Greece is unlikely to dare to challenge its long-standing, one might say, historical opponents. However, with Washington’s support behind, it might take a chance. The most piquant in this situation is that both conflicting countries are part of the NATO bloc. What to do in this case with the famous 5th article of the charter of the North Atlantic bloc is decidedly incomprehensible. But in addition to the above, there are other "players" who are trying in this situation to maximize the benefits in their own interests. According to available information, on January 2 of next year, it is planned to sign an agreement on the construction of the Eastern Mediterranean gas pipeline, which Israel, Greece and Cyprus intend to conclude. On this highway, with a length of about 2 thousand kilometers, it is planned to supply annually to southern Europe from 12 to 16 billion cubic meters of gas from the Israeli Leviathan field and the Cyprus Aphrodite. It should be noted that in Tel Aviv, the implementation of this project is of great importance, and not so much even economically, but geopolitically. Some local politicians are already talking about the fact that the supply of Israeli "blue fuel" to Europe will give grounds to count on "enhanced counter-terrorism partnership", aimed not only against Iran, but also against Turkey. And some say Israel’s prospects of becoming one of the "dominant military and economic forces in the Mediterranean."

Russia impose a war of all against all

Interestingly, the energy project mentioned above enjoys the full and unconditional support of Washington. It would seem: here is another competitor to American LNG in Europe. The market is great there, but not rubber ... Why, then, is the United States, ready to gnaw Russian gas pipelines, almost applauding the Israeli? The answer to this simple riddle is simple: the United States will certainly allocate a share in European energy supplies to its “best friends” from Tel Aviv by completely “knocking out” our country from this market. It doesn’t work out in any other way ... Everything that Washington is doing today is primarily directed against Russia. Unless it has as its purpose to slander China ... US plans aimed at fomenting tension in the Mediterranean region are by no means limited to intentions to "roughly punish" the recent growing disrespect for Washington Ankara. For the sake of this alone, they would not even “unfreeze” the conflict in Cyprus, or would limit themselves to this maximum. Here everything is more complicated and multifaceted, apparently, the “maximum program” in this case includes the collision of everyone: Turkey, Greece, Libya, Israel, and, of course, Russia. Judge for yourself: Moscow managed to find a compromise with Ankara in Syria, but in Libya their interests threaten to diverge diametrically. Now Athens is pouring oil into this fire: not so long ago, the Commander-in-Chief of the Libyan National Army personally visited Field Marshal Khalifa Haftar. Naturally, in search of support against the PNS and Turkey behind it. Military, including.

Russia is in a more than awkward position in this situation. It is no secret that the favor of our country is leaning more on the side of Haftar than Sarraj. However, the conflict with Turkey in Russia also "does not smile" on any side - that is, with the military, with the political, with the economic. It is extremely undesirable to spoil relations with Greece. This country, after all, is Orthodox, and even if it can hardly be attributed to our “friends” in the European Union, but at least it does not show the consistent hostility that many of its other members. Moscow succeeds in maintaining peace and relative agreement with Israel, frankly, at the cost of enormous endurance and despite the extremely provocative actions of Tel Aviv in Syria. If this country also “dives” into the brewing maelstrom of the conflict in the Mediterranean (and it will most likely be), then not only this region, but many others will risk becoming a blazing and fire-breathing volcano. The Middle East is above all. All the titanic efforts of our country, aimed at establishing at least relative peace and tranquility there, can go down the drain. Ultimately, Russia will either have to curtail its presence in this region, putting an end to its barely gained leadership status, or inevitably get involved in a series of military conflicts, most of which will be fraught with much greater material and human losses than the Syrian campaign.

For the umpteenth time in history, the United States has proved by its actions that the local politicians see a better solution to any of their own problems as a war in Europe. Let the Turks mate with the Greeks, Libyans and Israelis, and the Russians will have to disentangle all this! Anyway, we will later declare them guilty of everything that happened ... It’s hard to say today what the success of the next villainy conceived in Washington is, but its consequences will now have to be taken into account anyway.
Ctrl Enter
Noticed oshЫbku Highlight text and press. Ctrl + Enter
We are
Putin's departure: how to prevent the collapse of Russia's foreign policy
Ten "defeats" of Putin
Reporterin Yandex News
Read Reporterin Google News
Ad
We are open to cooperation with authors in the news and analytical departments. A prerequisite is the ability to quickly analyze the text and check the facts, to write concisely and interestingly on political and economic topics. We offer flexible working hours and regular payments. Please send your responses with examples of work to [email protected]
26 comments
Information
Dear reader, to leave comments on the publication, you must sign in.