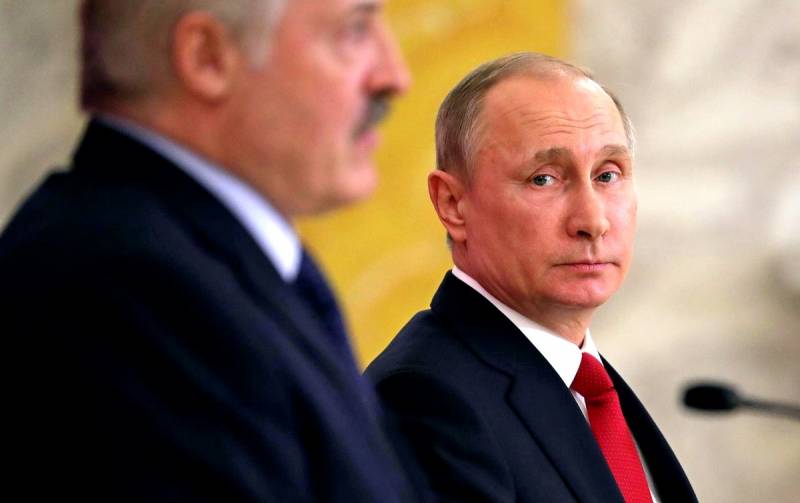 One of the landmark events of the outgoing year was to be the “in-depth integration” of Russia and Belarus into the Union State. It would be safe to celebrate the 20th anniversary ... of talking about him, that's just the mood is something completely festive. Two meetings at the highest level - the heads of both states, held only this month, brought a result that is extremely close to zero.


Despite optimistic statements made by some rather high-ranking officials both in Minsk and in Moscow, it becomes clear: the process has finally “stalled”. The question is not only about unification, but about further rapprochement becomes the further, the more problematic. Why did it happen? And is there still a future for the Union State?

The last interview of the Belarusian leader, already mercilessly scribbled for quotes and revered with particular zeal by the Western and Ukrainian media, is in itself a challenge to the Kremlin. Echo of Moscow is a resource for the current Russian government, to put it mildly, not too loyal. It’s not entirely clear what effect the Old Man seeks to achieve in this way - either to show his own “democracy”, or to spit particularly sophisticatedly at heart with those with whom he had recently negotiated. Yes, and not so important, in principle. For in the interview itself we see plenty of moments that cannot be called otherwise than provocative and unfriendly attacks on our country with all our will. Perhaps the most remarkable thing here is not even Lukashenko’s repetition of the thesis that Russia “could violate the sovereignty” of his country. The real “cherry on the cake” is his further discussions about the reaction of the “West and NATO”, which immediately “drag” our country “into the war” for such an “encroachment”. “And they will be right in something!” - the Belarusian president exclaims pathetically. Well, here we are ... It turns out that Alexander Grigorievich now sees the North Atlantic Alliance as the guarantor of his country's independence. I wonder since when ?! After such “pearls”, his own words that Belarus is an “outpost of Russia” that “will not let tanks go to Moscow” sound quite mocking. And the statement that in the event that “someone wants to fight” with our country, he “will not step aside” is completely ominous ...

We have to admit: Old Man either "reported" in his attempts to pay tribute to seafood at the same time and sit on everything that he could, why he began to confuse the right with the left, and the warm with the soft, or deliberately spills completely mutually exclusive maxims. Here he criticizes the idea of ​​Ukraine joining NATO. But then he suddenly declares that the extremists there are "roughly called Natsiks", with which he, "of course, does not agree." “No need to offend anyone, everyone has their own ideas!” - Alexander Grigoryevich shows a breadth of views and true political correctness. Tell the residents of Donbass about this ... In fact, such passages in his performance no longer cause much surprise. Lukashenko crossed the notorious “red line”, having started a speech about “wars alien to Belarus”, and reckoning them the Great Patriotic War. After that, the intimidation of our country, whether by NATO, or by the other “world community” —this is so ... Nothing special. And the peculiar lamentations about “tightening the screws”, “pressing”, the trade deficit, reproach of the “free military bases” of Russia on its “sovereign” territory and the like, sound not just a familiar background, but a mandatory refrain in general. But how can Lukashenka, speaking to the public about relations with Moscow, not “carry her to the bumps”, not reproach for all conceivable and unimaginable sins, and at the same time not count with the meticulousness of the small accountant how many kopecks “offended” him? This, after all, perhaps, he will not be.

Attacks of this kind do not even upset, do not anger, rather cause certain, purely physiological reflexes - they are too obsessive and foul-smelling at the same time. In some places, Lukashenko is simply starting to “carry” it openly. For example, when he begins to demand discounts on energy resources due to the fact that “80% of the grief fell on his country” from the accident at the Chernobyl nuclear power plant, which was “built and operated,” and, most importantly, “blew up” exactly “not Belarusians”. Following such a “logical model,” presumably, the Russians tried ?! Or offers Russia ... "to join the Belarus"! Nothing more?! However, behind all these shocking demarches there is no, no, and something unkind, cold and prudent is overlooking: "maybe only our children can build a single country." The current “first independent Belarusian state”, “his child”, Alexander G. categorically does not intend to “put in a coffin”. Today he offers us "to try to sculpt a union state." Yeah, "I blinded him from what was"! And then for a week the hands of soap ... Ugh, you - what kind of vile associations beg from these hypocritical words! And others, in fact, have nowhere to come from. The President of Belarus clearly and unequivocally makes it clear: while he is in power in Minsk, they intend to consider Russia there exclusively as an endless source of everything, sorry for the vulgarity, “balls” and “freebies”. Not at all embarrassed by everything that was said before, he continues to demand discounts, preferences, benefits and “special conditions”. We are brothers! “Give fighter jets for free”, “give cheap oil and gas”, “give a deficit-free trade balance”, “give, give, give ...” But how much can you ?!

The "window of opportunity" is already

After such “revelations,” a statement made on the eve of the scandalous interview by the Deputy Prime Minister of Belarus Dmitry Krutoy that “the entire integration package has been agreed upon,” with the exception of “two or three issues,” a solution on which will be “found in the coming days” sounds extremely strange. With what joy did the upcoming Minsk official see the upcoming “tomorrow’s signing of the relevant documents by the leaders of the countries,” and certainly “in a festive atmosphere” ?! After absolutely clearly and clearly indicated by Alexander Lukashenko, without whom (and even more so - contrary to the will of which) not a single serious question is solved in the country, his position on the most key issues of integration into the words of Mr. Krutoy that “the process, frankly, I’ve gone, ”I want to answer the question:“ Where !? ” Only frankly, please ... Until recently, when he spoke of his readiness to sign at least energy supply contracts with Moscow, Alexander Grigoryevich, in the same unfortunate interview, again began to discuss the topic of “alternative supplies”, “reverse”, and even “pipe removal” from Russia . Veterans do not age with their souls ... I’ll clarify: veterans of extorting “battles” and burial “assaults”, which Lukashenko is without a doubt. The gas price is again not good for him and he intends to “look for an alternative”. Well, God help you, as they say. The most interesting thing is that serious warnings regarding the possible consequences for Belarus from such thoughtless “gestures” of its leader today sound not even from the East, but from the West. Maybe you should listen?

The International Monetary Fund predicts a 2020% GDP growth in Belarus in 1.5. And this is the most optimistic forecast! The Eurasian Development Bank provides 1.2%, while the World Bank predicts a 1% growth at best. All these rather pessimistic expectations are connected precisely with the inability of the Belarusian authorities to agree with Moscow on compensation for the costs that are inevitable when implementing the so-called “tax maneuver”. However, Minsk stubbornly "draws" a figure of GDP growth of 2.8-4%! On the other hand, there are sane people among those in power there. For example, Prime Minister Sergei Rumas, who explicitly says that “reserves of traditional economics"Countries are" practically exhausted. " “New productions” are needed - only money for them has nowhere to take from. Foreign investment? And who will make them? Trying to bargain desperately with Moscow, talking about some “alternatives” there, Lukashenko bashfully silent about so many things. At least that Belarus owes Russia about $ 8 billion. As of last year, this amounted to almost 40% of the state debt of the country. It is simply impossible to give them away, and Minsk was forced to take more and more loans to service and refinance the lion's share of the former. And what to do next? The 500 million dollars that he, apparently, should be received from his Chinese comrades, will not be close to solving the problems of debt to Moscow, but he will certainly be driven into even greater dependence on Beijing. About 40% of Belarusian exports go to Russia. And another third (fuel supplies to the same Europe and Ukraine) are directly dependent on imports of Russian energy carriers ... Is the quarrel going to be a little expensive?

Any projects for the development of the Belarusian economy without Russia, contrary to Russia and “spite” to it, are nothing more than natural manilism based on the “Wishlist” of some in Minsk, and not on a real assessment of their own capabilities. China, which has its own very specific interests in Belarus, will not replace Russia here in any case, despite the really available investments. Lukashenko will definitely not get oil from the Chinese - they themselves buy it, including from Russia. But the impending economic “storm” may well “come around” for Alexander Grigorievich, pretty badly spoiled by the domestic political agenda. The point here is not that Belarusians will take in the upcoming presidential elections, and they will not vote for him. Some people in the West simply love to use such events as an excuse for organizing “color revolutions”. Minsk today is truly suicidal policies, increasingly giving free rein to the local "patriots", zealously jumping "against integration". All the witnesses of these Russophobic actions, who are at least somewhat familiar with the local specifics, agree: this audience could "walk around" only by feeling the complete connivance of law enforcement agencies. And that means the highest power. I will repeat it for the hundredth time: providing the opportunity for the “protest movement” to develop, grow stronger and feel impunity, Lukashenko is acting very imprudently. Simply put, sticks his head in a noose. Kiev "Maidan", if it was wrong, also began not "against Yanukovych", but "for Europe." In doing so, the Belarusian leader finally completely deprives himself of the illusion of “freedom of maneuver”, making his own hands approach the moment when he will have to choose between a bad and a very bad scenario.

Unfortunately, 2019 was not a breakthrough year in the integration of two truly fraternal, inextricably linked countries. One could summarize with words like: “time will tell” or “wait and see”, but the trouble is that Minsk and Moscow have less time for everything about everything. Let us leave the words about the “future generation” on the conscience of Alexander Grigoryevich. The question of the Union State will either be resolved no later than next year, or it will remain in history another example of the most severe geopolitical defeat. And not one country, but two.
Ctrl Enter
Noticed oshЫbku Highlight text and press. Ctrl + Enter
We are
Ukraine from the inside: traitors, curators and those who watch from the Kremlin
Ten "defeats" of Putin
Reporterin Yandex News
Read Reporterin Google News
4 comments
Information
Dear reader, to leave comments on the publication, you must sign in.