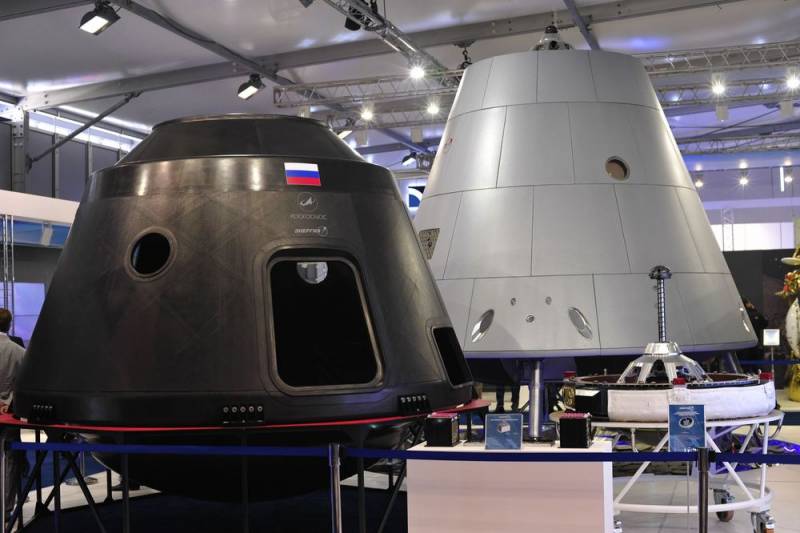 On the promising Russian reusable manned spacecraft (SC) Federation, we wrote repeatedly. During development, the launch of the spacecraft was delayed, and the spacecraft itself even managed to change the name “Eagle” (more “courageous,” according to Dmitry Rogozin, head of the Roskosmos state corporation) and become “reusable” three times. That is, he will only be able to fly three times to the moon, and not ten times, as planned before.


It should be noted that the discrepancy of this spacecraft to the technical assignment (approved) by Roscosmos (according to the number of flights to the moon) is reported in the materials of the Energia Rocket and Space Corporation (RSC Energia - the developer of this spacecraft). It turned out on December 11, 2019, during a presentation to the head of Roscosmos, which was carried out by Nikolai Sevastyanov, Director General of RSC Energia. The materials directly stated that the frequency of use of each spacecraft “Oryol” for flights to the Earth’s orbit will be 10, and to the Moon’s orbit - 3. At the same time, the 2016 statement of work says:

The multiplicity of the use of the returned apparatus when performing near-Earth flights and flights to the Moon is 10.

In addition, on the website of Roscosmos in 2016 it was said that each such spacecraft should have at least 10 flights to the moon. That is, it was planned that the spacecraft can be used more than 10 times.

Moreover, the developed spacecraft is 2,3 tons higher than the mass inherent in the terms of reference. In this regard, RSC Energia is taking measures to reduce the mass of the spacecraft so that it can be put into orbit at least the Earth.

It should be clarified that for the flight of four astronauts to the moon and the delivery of 100 kg of payload to the Orel spacecraft, only 400 kg of mass was allocated. It turns out that each crew member must weigh no more than 80 kg, including the spacesuit in which he is located, weighing 10 kg. That is, the man himself must weigh no more than 70 kg, which is acceptable for women, but for men this is problematic.

It must be added that the development of the Federation / Orel SC has been underway for 10 years. The first test launch was planned in 2015, and manned in 2018. However, the deadlines have seriously shifted. But we hope that this project will be implemented in the next five years.
Ctrl Enter
Noticed oshЫbku Highlight text and press. Ctrl + Enter
We are
In Russia, creates a new manned spacecraft "Eagle"
Russia intends to start mining on the moon
Reporterin Yandex News
Read Reporterin Google News
Ad
The publication is looking for authors in the news and analytical departments. Requirements for applicants: literacy, responsibility, efficiency, inexhaustible creative energy, experience in copywriting or journalism, the ability to quickly analyze text and check facts, write concisely and interestingly on political and economic topics. The work is paid. Contact: [email protected]
5 comments
Information
Dear reader, to leave comments on the publication, you must to register.
I have an account? Sign in