They "shot" not at Putin, but at Russia: what is behind the attack on the Lubyanka 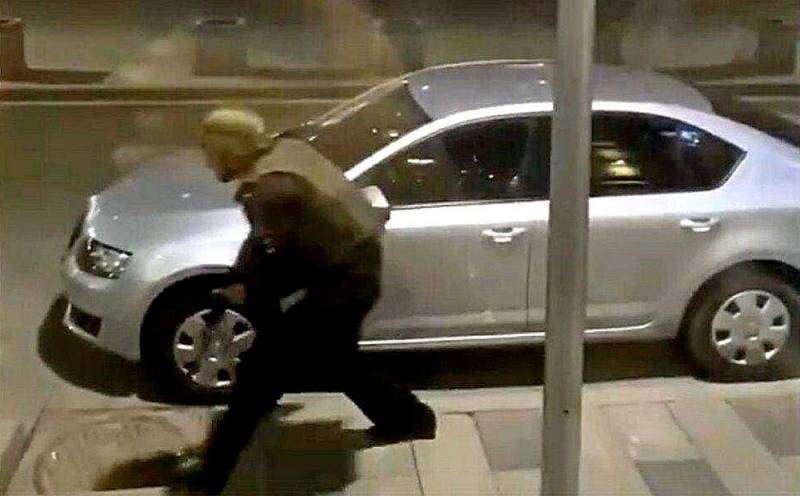 A soldier of the Russian law enforcement agency is tracking an arrow. Video frame

The tragic incident in the center of Moscow, and in particular, its coincidence with well-defined events, leads to very bad thoughts and suspicions. It is quite understandable that the answers to a significant part of the uncomfortable questions arising as a result will not be submitted for public viewing and discussion, hidden by a veil of departmental secrecy.

Some points will be explained at the official level and interpreted exclusively in the “right” way. However, who is stopping us from even trying to trace some very obvious relationships and patterns in what has happened in order to try to draw independent conclusions on their basis?

They try to “delete” the president from the information agenda

For some reason, the vast majority of people reflecting on the possible hidden motives of the shooter who attacked the reception of the Federal Security Service of Russia (I intend to build on exclusively the official versions voiced at the moment, events - both in terms of the number of attackers and the number of victims) link him actions with the celebration of the professional holiday of domestic security officers. And, accordingly, with the presence at this event of the chief, perhaps, a native of this service - the President of Russia. At the same time, the 15th annual major press conference of the head of state was somehow completely thrown aside. For some reason, no one takes into account the fact that in a matter of minutes, in fact, the colossal work of a mass of people, resulting in a four-hour conversation between Vladimir Putin and domestic and foreign journalists, was crossed out. “Torpedoed” is an event of really great importance both for our country and for the whole world - after all, during the press conference, Vladimir Vladimirovich did not poison the jokes, but spoke about the most serious, one might say, programmatic issues. On the prospects and problems of Russia, integration into the Union State with Belarus, the future of Donbass and a host of other issues relating to external and internal policy.


But something similar already happened - and not so long ago! The association is more than clear. In the memory, “funny” summer days pop up when the arrest for drug possession of a journalist of an “opposition” publication in the same way overshadowed the most important event - the opening of the St. Petersburg Economic Forum, which was attended by President Xi Jinping. And Vladimir Putin took part in this, and, again, spoke about things of utmost importance and importance. But it did not grow together ... News the tapes of all publications and news agencies were instantly clogged with details of "illegal detention" and "trumped-up cases." Today, actually, few people already remember this, including even the liberal “party”, which has since changed both “heroes” and “martyrs” a hundred times, but then it worked, and how! As far as I remember, in those days even an analysis of the domestic media sphere was carried out very quickly. What is the SPIEF? Which president? All attention was diverted to an unusable object. This I do not call names - this is the concept used in jurisprudence and not only. What does it say about the victory of the TV over the refrigerator? In the very "TV" (in fact, in any media) the criminal chronicle will always win a convincing victory over any political agenda. Over economic - especially. Which is proved with brilliance in our native Fatherland, and for the second time.

The attack? Yes, the highest level!

Regarding the Day of the employee of the security agencies of the Russian Federation ... There is also, of course, a connection. Everything is correct, in a well-designed and well-organized special operation (and I personally have no doubt that we are dealing with it), as a rule, there are several “layers”, several goals and priorities. On their professional holiday, the FSB received ... I do not want to say anything offensive to employees of this respected structure, especially since one of them died and several more were injured. Therefore, I confine myself to the correct old definition: “insult by action”. It is difficult to overestimate the moral-psychological and image damage from this emergency. Again, the fact that everything happened exactly at that moment when the President of the country congratulated the Chekists gives the incident a particularly gloomy tone. It is a challenge, impudent and cynical. An attempt to say to all of Russia: “They cannot defend themselves! Do not rely on them ... "The one who prepared the attack, calculated all aspects to obtain the most negative effect. After all, the purpose of the attack was initially not a “breakthrough” into the FSB building, the destruction of the maximum number of its employees or, say, hostage-taking, namely, what happened was a voiced slap in the face. And it doesn’t matter anymore how many attackers were there, what exactly they fired from and who they were. To our great regret, our plan succeeded to the fullest extent. And by the way, is it by chance that everything happened just after Vladimir Putin said at a press conference about the need to fight terrorism, mentioning terrorist attacks in Beslan and Dubrovka as “the most difficult days for him” ?! 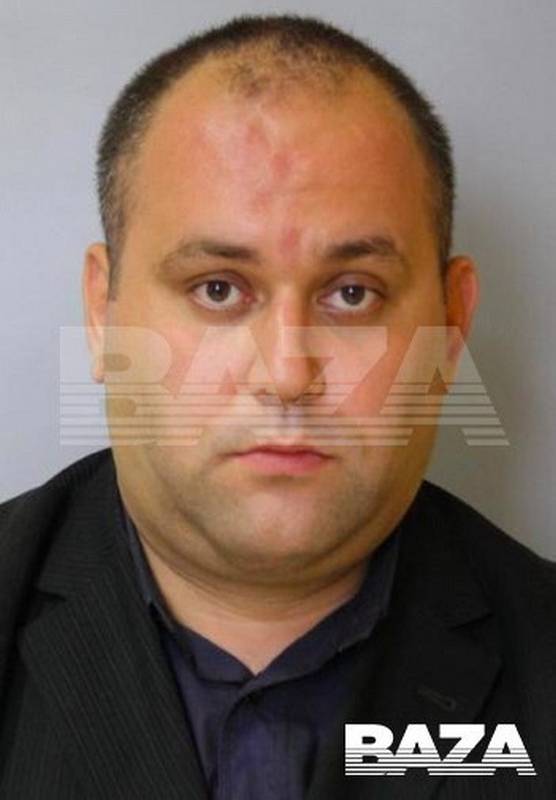 The 39-year-old resident of Podolsk, Evgeny Fatikhovich Manyurov, who committed the attack. Photo: Telegram channel BAZA
It’s hardly worth doubting that this is not just a terrorist act, but an operation, which is supported by very serious people and structures. Yes, judging by the "seemingly reliable" data that appeared on the Internet and even photos of the shooter, he is unlikely to be a Mujahid or an ISIS adherent. I am sure that tomorrow some will begin to breed a bodygirl about "an ordinary man brought by life and the system." Or another crazy man who decided in such a way to take revenge on someone or take his own life ... But does it ever occur to you that an ideal suicide bomber is not a pro saboteur, a commando us with a parachute under cover of night, but just at first glance, "an ordinary man"? Although ... How did the “ordinary” manages to end up in Lubyanka with firearms of almost an army type and, seemingly, even an explosive device, and how did he manage to kill one and injure four FSB officers? Good question, isn't it? But even if it is accepted for the truth that the “Lubyanka shooter” was not connected with anyone, then ... This does not mean that he was not anyone and we use “blindly!” Yes, yes - terrorist attacks in which such “left” people are just prompted by someone to act on time, provoked, “carried on” to the right time and place so that they don’t suspect about it, alas, and are the most unpredictable and hard to prevent. And, therefore, the most effective. By the way, there is one more detail that suggests that someone is still behind the attack, and I intend to cite it as the latest evidence of my version. 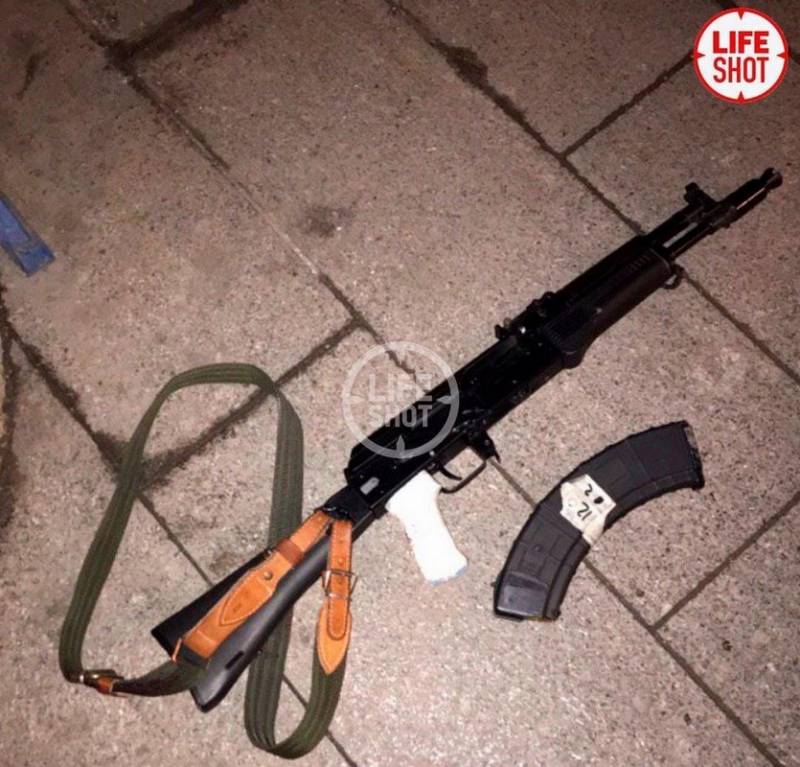 Weapons of the attacker. Photo: Telegram channel LIFE SHOT
The place and time of the “action” was chosen not just wisely, but with a deep understanding of the specifics of the special services. Let me explain: a large press conference is being held on this day. Adova, a titanic work for the presidential guard and all other special services and law enforcement agencies. FSB - first of all. And now this pendulum event, which was successful, without emergency situations, is finally completed. The First is located in a much safer place, surrounded by security officers. I am not saying that this is an unambiguous reason to "relax." Certain structures never relax. However, even the best professional can not be at the peak of tension constantly, 24 \ 7. And here it is, in moments when, in theory, the main potential problems and threats are behind, when the holiday has already begun, a blow is being struck. If this is not the most accurate calculation of “specialists” of far from homegrown level, then I don’t know what. But I do not believe in coincidences in such matters, excuse me.

What is left? To express condolences to the family and friends of the FSB officer who died at the military post, and wish a speedy recovery to all the victims. And also - to fully understand what happened, and not to perceive it as another episode from the capital's criminal chronicle. Be that as it may, no matter how many people were killed that evening, whose particular blood had not spilled on the bridge capitals, they did not shoot at the FSB. And not Putin ... They shot at Russia. Each such attack is a blow to all its inhabitants. By their calm, confidence in their country, by their future. Let us hope that those to whom it is supposed to be on duty should make all the necessary conclusions from what has happened. And even more than that ... However, a clear understanding of the fact that our Motherland, all of us are attacked already with arms in hand, should come to everyone. The sooner, the better.
Ctrl Enter
Noticed oshЫbku Highlight text and press. Ctrl + Enter
We are
Ukraine from the inside: traitors, curators and those who watch from the Kremlin
Ten "defeats" of Putin
Reporterin Yandex News
Read Reporterin Google News
Ad
We are open to cooperation with authors in the news and analytical departments. A prerequisite is the ability to quickly analyze the text and check the facts, to write concisely and interestingly on political and economic topics. We offer flexible working hours and regular payments. Please send your responses with examples of work to [email protected]
49 comments
Information
Dear reader, to leave comments on the publication, you must sign in.