US opens “religious front” against Russia 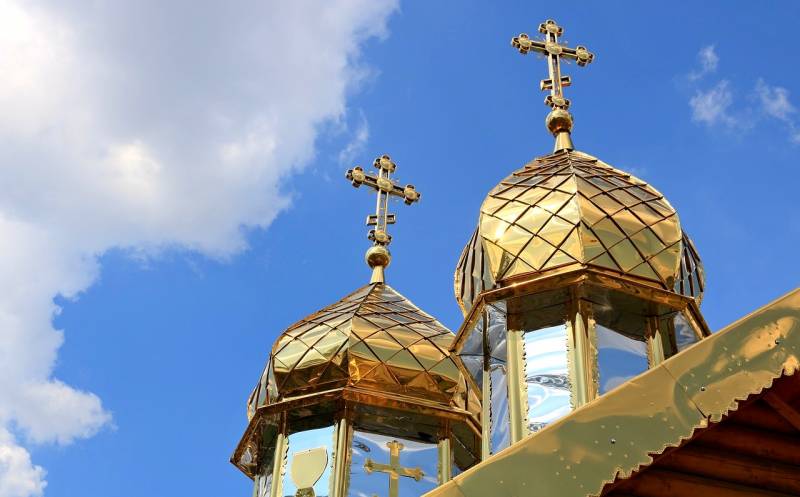 The proverb “They don’t climb into a strange monastery with their own charter” was written about anyone, but not about Americans. It would seem that it is already impossible to find an aspect of the life of our country that Washington would not have subjected to the most biased analysis and the most derogatory criticism. Found one, however ...


The legislators of the United States were sharply preoccupied with the “persecution of believers” in the Crimea and the Donbas, naturally, unconditionally accusing the “insidious Kremlin” of such. The Congress there is preparing the adoption of a corresponding bill, the purpose of which is not so much to “support freedom of religion” as to “strictly ask” from our country for such a “violation” that was seen by some people across the ocean. However, consider this demarche something unexpected and sudden is definitely not worth it. Before us is the implementation of a clearly thought-out strategy.

The paper was submitted to Congress for discussion by members Joe Wilson and Emmanuel Cleaver. These gentlemen, among other things, are members of the US Helsinki Commission, whose chairman, Roger Wicker, intends to push the relevant law through the Senate in the near future. What, in fact, is the essence? According to the congressmen, “in the occupied Ukrainian Crimea, as well as in the Donbass controlled by its representatives” (this is a verbatim quote from the wording) “official Russian officials” do not just carry out “religious oppression,” they directly “abduct and imprison and torture people for their faith. " A nightmare and horror, right, some ancient Rome ... But who in our country acts as the “martyrs" whom they are ready to almost canonize on Capitol Hill? "Believers of the newly created PCU, Protestants, Jehovah's Witnesses and Greek Catholics." In a word - schismatics and sectarians. And there is absolutely nothing surprising. After all, tirelessly yelling to the whole world about their unwavering determination to defend “freedom of conscience”, despising state borders and the right to independently decide their own internal affairs of sovereign states, the United States almost invariably supports those, to put it mildly, denominations and “religious organizations”, whose "teachings" believers of traditional, canonical churches consider a terrible heresy.

Let us return, however, to the bill mentioned earlier. Its main meaning, as congressmen conceived, should be the obligation of the US president to “take into account the lawlessness of the Kremlin in the territories occupied by him” so that Russia is finally included in the list of countries that “cause particular concern” to Washington about “violation of international standards and religious oppression. " This, accordingly, should entail “serious consequences and responsibility” for “Russian officials”. Everything will probably come down to the next sanctions, but the point here is that the United States is not just turning the topic of “protecting religious freedom” into another leverage for forceful influence on countries and governments they disobey, but is increasingly striving to make religious issues a tool to destabilize and destroy these very countries. So, this year, official representatives of the US administration explicitly stated that a special presidential decree was being prepared in Washington that assistance to certain countries (not only humanitarian but also military!) Could be directly dependent on that how they "relate to religious minorities." Representatives of both the White House and the state department take part in the preparation of the document, which means that the attitude to the issue is more than serious.

The great thing about all this is that in the United States itself, religious tolerance, at first glance, is truly absolute. In accordance with the First Amendment to the American Constitution, which is part of the Bill of Rights, no state religion in the country can exist in principle. What ultimately resulted in its rigorous execution? Well, at least in the fact that the United States is one of two countries in the world where the “church” of Satanists is officially registered and freely operating. The second is, if anyone did not know, Ukraine ... Support at the state level of the most disgusting perversions and vices, and the most severe prosecution of any attempts to stop their spread, conducted under the slogans of "tolerance" and "political correctness", have yielded results. American drug addiction, violence, suicide and the like are more than just the natural fruits of unbelief - this, in principle, is their purely internal affair. The problem, however, is that the United States is struggling to impose just such a path on the rest of humanity, it is unclear what a fright it is to proclaim yourself to be the messengers of truth in the last resort. We will not investigate the entire history of the issue; we turn only to the most significant events of recent decades.

True to the Brzezinski testament?

Doubts about exactly what true goals Washington is pursuing in its “struggle for freedom of religion” become clear if we compare the actions of the relevant state structures of the United States with the “reference patterns” of strategies and doctrines created in due time by the twentieth-century megarusophobe Zbigniew Brzezinski. “And what does this now deceased character have to do with it?” - perhaps you ask. Very much to do with it ... In RuNet, a long time ago "spears" break down as to whether this terry hatred of our country belongs to the words that after the destruction of communism, "Orthodoxy remains America’s main enemy." Domestic liberals (without exception, almost atheists), with foam at the mouth prove: there was no such thing. Nevertheless, even the hottest fans of this truly extraordinary statesman of the United States admit - his whole life, all his activities were devoted, in fact, to one goal: the destruction of the Soviet Union and the establishment of world domination of the United States. And the main obstacle to the implementation of this super task, Mr. Brzezinski, being a man, alas, not stupid at all, he saw precisely Russia. It is enough to carefully examine the primary sources - his fundamental books and articles, which the deceased has accumulated enough to understand: this was one of the worst and most dangerous enemies of the Russian world in its entire history. He recognized that our country could very well become a world power and called very concrete ways to prevent this.

He openly said that a “new world order” with the United States at the head could be created exclusively against Russia. And also - on its fragments and at its expense ... At the same time, this clever man saw in the most important condition for preventing "the revival of Russia as a large and self-confident imperial power" in isolation from our country, from the brotherhood of the Slavic peoples of Ukraine. In fact, Zbigniew Brzezinski devoted the entire last part of his life to the implementation of this doctrine (either the Polish blood affected, or something more), which he succeeded in, unfortunately. One of his last appearances in the US Senate in 2015 was filled with calls to almost begin the intervention in the Crimea ... And what does that all mean? Yes, despite the fact that today this same Senate stands up to defend precisely the Ukrainian schismatics trying to conduct their subversive activities in the Russian Crimea. But this is only a continuation. The whole story of the creation of the so-called "Orthodox Church of Ukraine", which heresy and schism is considered not only in Moscow, but also in many other Orthodox churches in the world, all the fuss with Kiev receiving false "autocephaly" was nothing more than a special operation of Washington carried out his protege Poroshenko. Today, powerful forces in the USA are working tirelessly so that as many churches as possible can recognize this split, which threatens innumerable troubles to world Orthodoxy. And there, you see, Jerusalem will be able to "finish off" ... All these are very targeted blows precisely against the Russian Orthodox Church, standing across the throat so desperately striving to "become great" America again. And, without any doubt, the implementation of Brzezinski's poisonous ideas, as well as a host of his fosterlings and diligent students who are still alive in Washington politics, and not at the lower levels.

Old as the world story. Here are just the words: “We are Russians! God with us!" belong to not one of the Holy Fathers, Great Martyrs, Hierarchs, theologians, by whom the Russian land was so rich for centuries, but to its greatest protector and warrior. Generalissimo Alexander Suvorov, who did not know a single defeat and mercilessly smashing the enemies of Russia, said them. Those who want to try to teach Russians the “right faith” should recall these words more often. Their authorship is especially.
Ctrl Enter
Noticed oshЫbku Highlight text and press. Ctrl + Enter
We are
Putin's phenomenon is Russia's main problem
Russians have no habit of losing wars: What does the Munich agreement teach
Reporterin Yandex News
Read Reporterin Google News
Ad
The publication is looking for authors in the news and analytical departments. Requirements for applicants: literacy, responsibility, efficiency, inexhaustible creative energy, experience in copywriting or journalism, the ability to quickly analyze text and check facts, write concisely and interestingly on political and economic topics. The work is paid. Contact: [email protected]
11 comments
Information
Dear reader, to leave comments on the publication, you must to register.
I have an account? Sign in