Krymsky bridge: date is known - they won’t go without Putin

10 May 2018
0
There are only a few days left before the opening of a grandiose object - the Crimean bridge, which will connect Crimea with the Taman Peninsula. The large construction project, which Ukraine was so indignant at, is close to completion. According to the newspaper Gazeta.ru, which refers to "two informed sources," the opening will take place on May 15 or 16. 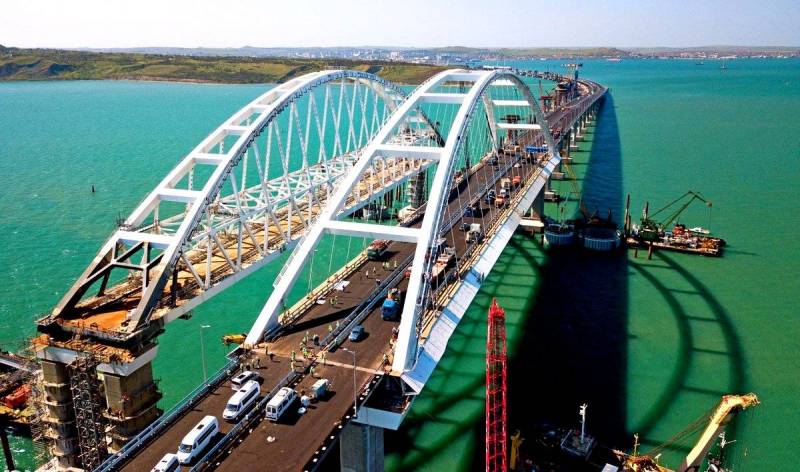 The celebrations will be held in the presence of Russian President Vladimir Putin. The exact date of the opening of the bridge across the Kerch Strait depends on the time of his visit. Among the first who will cross the bridge will be bikers from the famous Night Wolves club.

Putin will definitely go to the opening of the bridge. Most likely, it will be next Tuesday. As a last resort, everything will shift for the day

- quotes the publication of a word close to the Kremlin source.

The builders worked at an accelerated pace - the construction was completed half a year earlier than planned. Earlier, many media claimed that the movement of cars on the Crimean bridge will begin around the second half of May, but no one said the exact dates.

The head of the Republic of Crimea, Sergei Aksyonov, said on April 19 that in a few weeks the first cars would go along the bridge. The Deputy General Director for Infrastructure Projects at Stroygazmontazh Leonid Ryzhenkin also claimed that commissioning of the bridge will be in the second half of May. There were also plans to open the Crimean bridge on May 9, on Victory Day, but then decided not to combine these two important events.

The president of Russia has a very busy schedule. On May 14, he is scheduled to participate in the summit of the Eurasian Economic Union, to be held in Sochi. On May 18, in the same southern city, the head of state is due to meet with German Chancellor Angela Merkel. And then - Petersburg economic a forum in which Vladimir Putin also plans to attend. Thus, the president’s “window” for opening the Crimean bridge is not too large. And if you take into account the relatively small distance between Sochi and the Crimea, it just turns out that, most likely, the ceremony will be held on May 15 or 16.

However, cars could ride on the bridge right now. Already at the end of April, the automotive part of the structure was ready for this. The customer accepted the act from the general contractor on April 28th. It remains to establish road signs and carry out some more work. Thus, the bridge is waiting only for a suitable date, when the president will have time to participate in the grand opening.

It is still unknown how the ceremony will go. Presumably, in the middle of the bridge, in the central arched span, a red ribbon will be cut. "Night Wolves" are actively preparing for the event. It is possible that bikers from the Crimea will meet on the bridge with motorcyclists from other Russian regions. About five hundred motorists will take part in the first passage on the bridge.

It should be recalled that the Crimean bridge has a length of 19 kilometers. It began to be built in 2016. It was originally supposed that its car part would be opened in December 2018, but now cars and buses will go very soon. Trucks and trains will have to wait.
Ctrl Enter
Noticed oshЫbku Highlight text and press. Ctrl + Enter
We are
Ukrainian drove along the Crimean bridge and recorded an appeal to fellow countrymen
Opening of the Crimean bridge: the bill went to watch
Reporterin Yandex News
Read Reporterin Google News
Information
Dear reader, to leave comments on the publication, you must sign in.