Playing with fire: Who is behind the anti-Russian protests in Belarus? 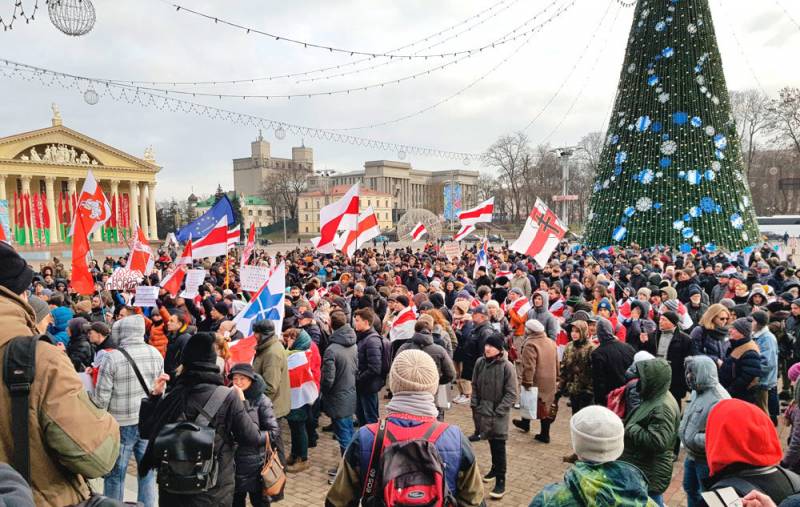 The intensification of the construction process of the Union State caused protests in Belarus. The local opposition took to the streets, demanding that deeper integration be recognized as illegitimate. At the same time, none of them was “spread the liver on the asphalt” and was not dragged into a jail. What can such neutrality be shown by official Minsk?


Leaders of Belarusian parties and movements, whose names will not say anything to the Russians, signed an appeal in which they recognized the signing of the agreement on the creation of the Union State by the decision of "authoritarian and irresponsible leaders." The integration, in their opinion, will lead to the actual annexation of Belarus by the Russian Federation. Oppositionists called on the international community to recognize the newly formed Union State as illegitimate, and threatened the Russians with further isolation, which would further damage our well-being.

What can be noted on the merits. On the one hand, some concerns on the part of the Belarusian public are not unfounded. The combination of large and small, as a rule, is not equivalent. For the Republic of Belarus, changes will be more significant than for Russia.

On the other hand, no national disaster will occur. If a confederation option is chosen, what are we talking about told earlier, Belarus will retain its sovereignty. Russians and Belarusians are one people speaking Russian, with a common culture and historical memory, not so long ago being part of one state, the USSR. Yes, the modern Russian Federation has many problems, but integration with it is a better option for small Belarus than the way to the West.

The outcome of "European integration" can be clearly seen in the Baltic states, Moldova or Ukraine. Balancing between Russia and Europe can be quite a long time, but not infinite. It will be enough an example of President Yanukovych with his throwing and attempted bargaining. For himself and the whole Square as a whole, it did not end very well.

So why did Minsk react so humanely to anti-Russian protests?

The answer lies on the surface. Protests by the nationalist Belarusian public at this stage are beneficial to President Lukashenko himself. Alexander Grigorievich can use them as a trump card in negotiations, fortunately, he promised in advance not to give up the country's sovereignty.

The reasons that can guide the Belarusian leader are understandable. But this is a dangerous path, primarily for him personally. Many processes that led to the Maidan in Ukraine also take place in Belarus. There was one difference - the authorities did not directly flirt with the nationalists. Faster integration makes Russophobia relevant, policy saddles the "independent horse". The balance of power begins to change gradually.

It will be easy to let the genie out of the bottle, but will it be possible to drive him back? And most of all, President Lukashenko himself plays with fire. While Alexander Grigoryevich is useful for the West, they temporarily forgot that he was “the last dictator of Europe”. But they can remember at any moment. For example, the German edition of DW recently published information about political killings in Belarus by the "death squads" Lukashenko.

In other words, in the West they may be ready to accept Belarus into their tenacious embrace, but without Alexander Grigorievich.
Ctrl Enter
Noticed oshЫbku Highlight text and press. Ctrl + Enter
We are
“Farewell, unwashed Russia!”: Three games of President Lukashenko
Ten "defeats" of Putin
Reporterin Yandex News
Read Reporterin Google News
8 comments
Information
Dear reader, to leave comments on the publication, you must sign in.