“Death squads” Lukashenko: the West is preparing a strike on the Old Man and Belarus 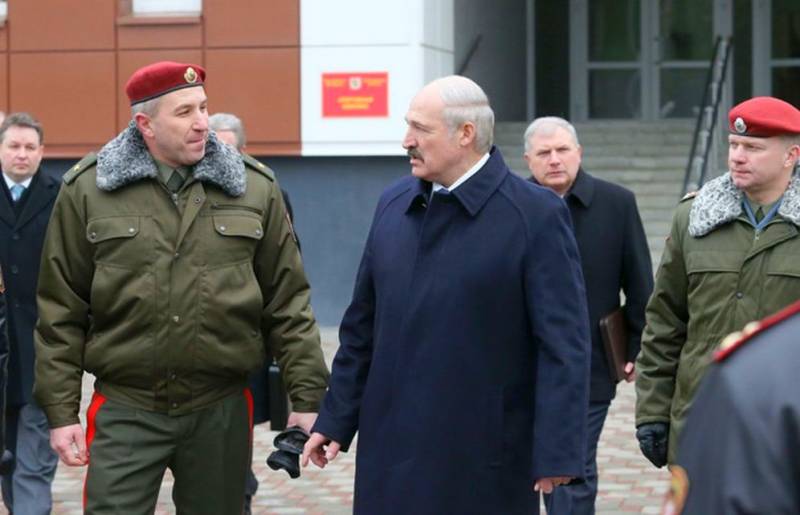 The fact that the attempts to “flirt” the president of Belarus with the “collective West” sharply intensified recently have not ended in good, first of all for himself, there was no doubt. And here it is - until recently they were saying something there about their readiness for "fruitful cooperation" with Minsk, the insidious "European partners" took and "pulled" a real time bomb near Alexander Grigoryevich.


By the way, it’s exactly the same as the one that demolished his Ukrainian colleague and political peer Leonid Kuchma from the imperious Olympus. The sensational “confessions” made public in Germany of a character posing as an ex-fighter of the Belarusian SOBR and directly accusing the local authorities of “organizing the killing of oppositionists” cannot be considered anything other than the beginning of a special operation of the West to completely eliminate the “last dictator of Europe”.

The script, "run-in" in Kiev

In truth, I was always struck by the fanatical commitment of some Western "offices" who do not very much like to advertise their own activities, not only to the stereotyped conduct of certain combinations, but to the repetition of them over and over again with absolutely absolute accuracy ... Is it the case here in Voltaire’s principle: “The best is the enemy of the good,” or simply in the inertness and laziness of thinking, but the fact is clear. Someone who "emerged" in Germany, calling himself Yuri Garavsky, "a former employee of the special rapid reaction unit of the internal troops of the Ministry of Internal Affairs of Belarus," is nothing more than a "reincarnation" of Ukrainian Major Melnichenko in 2000. By the way, the mass media is not saying that it is already called that way. For those who are not in the know or forgot, let me remind you: Mykola Melnichenko, an employee of the presidential security service of Ukraine, at one time “exposed” the head of state, as well as the local police, in exactly the same “bloody crimes” in which today the type who called himself Garavsky blames the Belarusian. This dodger allegedly managed to install a recording device in Leonid Kuchma’s office, with the help of which he recorded how he gave the then Interior Minister Yuri Kravchenko the order “to liquidate journalist Georgy Gongadze”. Neither the delusionality of the accusations themselves, nor the extremely dubious quality of the "evidence" played a role then - after the highest order to consider the "Melnichenko films" authentic was expressed by the US Embassy in Ukraine, the case was done ...

The so-called “Kuchmageyt” broke out, which, in essence, became the beginning of the end of the “non-fallow”, as a relatively stable and independent state. Yes, the president managed to "sit" until the end of his second term, but in 2004 the first "maidan" struck and then it started ... According to many experts, with whom I personally fully agree, it is the action "Ukraine without Kuchma" that started after the monstrous announcement accusations, became "the moment of the emergence of Ukrainian fascism." In any case, what exactly starting from her, there policy turned into, as the classic said, the "game" of the street crowd, skillfully guided by behind-the-scenes puppeteers, it’s quite obvious. And by the way, one of the most notorious Ukrainian characters of today, Yuriy Lutsenko, who delivered firearms to EuroMaidan in 2014, “hatched” precisely from those events. As, however, there are a lot of other “maidanschiki” ... The fact that the authenticity of the films was never 100% proven by anyone and never, and Georgy Gongadze was last seen alive at the moment when he visited the American embassy, nobody cared anymore. The country has embarked on a path of self-destruction that has led it to the horror in which it is now drowning. Kuchma, cowardly and vilely “surrendered” to Kravchenko, lives and lives, and the general, in whom so many saw the most promising head of Ukraine, was liquidated immediately after the first “maidan”. "Committed suicide" ... With two shots to the head, huh ...

Blow to Lukashenko and Belarus

Yuri Garavsky (or whatever it really is) claims that in 1999 he and his colleagues in the SOBR allegedly committed a number of murders of opposition Belarusian politicians: Viktor Gonchar, who headed the former Belarusian Central Election Commission, former Minister of the Interior Yury Zakharenko, businessman Anatoly Krasovsky, financially “supporting” the opposition, and, in addition, perhaps also journalist Dmitry Zavadsky. All these people, as far as is known, are missing, but the “former SOBR fighter” with foam at the mouth repeats: “They were killed on the command of the then commander of the unit, Lt. Col. Dmitry Pavlichenko.” He does not call his own detachment anything but a "death squad". Particular emphasis is put on the “penitent killer in uniform” that the crimes were known to at least the then head of the Ministry of Internal Affairs of Belarus Yuri Sivakov and Secretary of the Security Council Viktor Sheiman. Garavsky states that Lukashenko also "was in the know." True, it can not be proved in any way. However, the situation is the same with all other charges: there are no supporting documents, audio or video recordings. This time they did not bother ... In general, in his "history" the mass of places is not like embroidered with white thread, but generally does not withstand any criticism. He allegedly quit SOBR in 2003, and decided to escape to the West and ask for “asylum” only in 2018. Prior to that, he worked ... as a joiner in the furniture industry. Something about his allegedly “attempts to transfer materials” (what if they aren’t there ?!) to someone and a car accident that had been “rigged” after that, in which he nevertheless survived, weaves. Nasty "spy" film according to the canons of third-rate Hollywood.

However, all this is not so important. It has a completely different meaning - the “revelations” of the defector sharply declared in Europe almost one-on-one coincide with the “conclusions” of fifteen years ago, announced by the special rapporteur of the Parliamentary Assembly of the Council of Europe, Christos Pourgourides. This leader “investigated” the incidents with Belarusian opposition in 2004 and “handed down” exactly those conclusions that someone is putting into the mouth of the “ex-SOBR fighter” today. Even the set of epithets is exactly the same: the "blizzard" about the "Pavlichenko death squad" first began to carry, sorry for the pun, Purgurides. And he accused Alexander Lukashenko of involvement in the “political killings”. For a decade and a half, this “soul-chilling” story was, as it were, “paused”. And now, somewhere at the very top, the command sounded: “Fas!” All the “opposition horns” of Belarus are already tearing with a cry: “Really! True! True! That is how it was! We believe in full, completely and unconditionally! ” What the hell is the "evidence"? Who needs them? The "wave of popular anger" is already rising. Presumably, they will try to inflate it to heaven. It is unlikely that the West will in this case pull as long as with Kuchma. Here events will try to speed up as much as possible - for a completely understandable reason. It may well turn out that the “global sanctions regime” against those who are “guilty of serious human rights violations”, announced by the newly made EU High Representative for Foreign Affairs and Security Policy, Josep Borel, is being prepared not only for the liking of Russia. A very characteristic point is that the same “Deutsche Welle” is actively engaged in “scrolling” the scandal, this summer trying to fan unrest in Moscow and not so long ago was marked by accusations against our country regarding the murder of a Chechen rebel in Berlin. Extremely bad symptom.

Is not that a very interesting question? The answer to it, in general, lies on the surface. On the one hand, the West must at all costs, at all costs, frustrate the integration of Russia and Belarus, and their creation of a truly Union state. There is no full confidence that Lukashenko has finally taken up anti-Russian positions. In the end, this runs counter to his many years of political practice. Obviously, at the headquarters of serious organizations on both sides of the ocean, they do not want to take risks and seek to resolve the issue completely and irrevocably. And in the most radical way: “No Lukashenko - no problem ...” On the other hand, Alexander Grigoryevich is to blame for everything that happens. Why didn’t anyone try to inflate the theme of “death squads” to the scale of the world scandal 15 years ago? Yes, because in the West everyone understood and saw perfectly well - from Minsk all these accusations, like, excuse me, water from a goose! The head of state showed that he wanted to chew on all Western sanctions and strengthened friendship with Moscow, and did not “build eyes” on Europe. American diplomats flew out of the country like a cork from a bottle - and nothing, the world did not collapse. None of them, as now, pleaded humiliatingly to return in order to "be sober and reign." The “opposition” sat quietly, like the proverbial mouse under a broom, and did not gallop in the center of Minsk, ravingly flagging the Russian flag and burning portraits of Putin and Lukashenko himself. Would try only! Starting to gaze through the fingers at the increasingly arrogant actions of the "national-patriotic forces", the Old Man gave up slack, and many, both in Belarus and beyond, decided: "Akella is not the same ... Now it is possible!" Having decided to use his own “zmagars” and “friendship” with the West as “horror stories” for Moscow, the Minsk “Akella” really missed as never before in life.

The demarche of the “opposition” deputy of the Supreme Council of Belarus Anna Konopatskaya, who proposed to consider the issue of “security guarantees for the former president of the country”, would not have been unthinkable until recently. What other guarantees? What the hell is a "former" ?! And now, these conversations have not just become possible. They are the real “black mark” that the West sends Lukashenko. Either everything will be “in good shape”, with “guarantees”, or not blame me - you still need to get to Rostov. Alexander Grigoryevich - definitely not a cowardly mess of Yanukovych, they will try not to let him out alive. No one says that the "Maidan" in Belarus is scheduled for tomorrow, but the fact that the West finally determined exactly such a scenario for it is obvious. Whoever you’re not envying now is a Belarusian policeman - of them they will begin to sculpt “executioners” and “murderers” with tripled strength, so that later scumbags with brainwashed could “legally” throw “Molotov cocktails” into them and shoot like it was on the Kiev "Maidan". The main thing now is different. Leonid Kuchma signed the verdict on his country at the very moment when he began to play a game called "Ukraine is not Russia." He even wrote a little book, if you remember, with that name. Alexander Grigorievich is unlikely to have time to enjoy literary laurels, contrasting two fraternal countries. If in the near future he does not appreciate the colossal and fatal impasse into which such a course is leading, it may be too late. The next meeting of the heads of Russia and Belarus is scheduled for December 20. And if the “alarm signal” from Germany does not force Lukashenko, leaving aside ambitions and mercantile claims, to take a decisive step towards real integration, the real enemies of Belarus may simply not leave him time for further thought.
Ctrl Enter
Noticed oshЫbku Highlight text and press. Ctrl + Enter
We are
Ukraine from the inside: traitors, curators and those who watch from the Kremlin
Ten "defeats" of Putin
Reporterin Yandex News
Read Reporterin Google News
17 comments
Information
Dear reader, to leave comments on the publication, you must sign in.