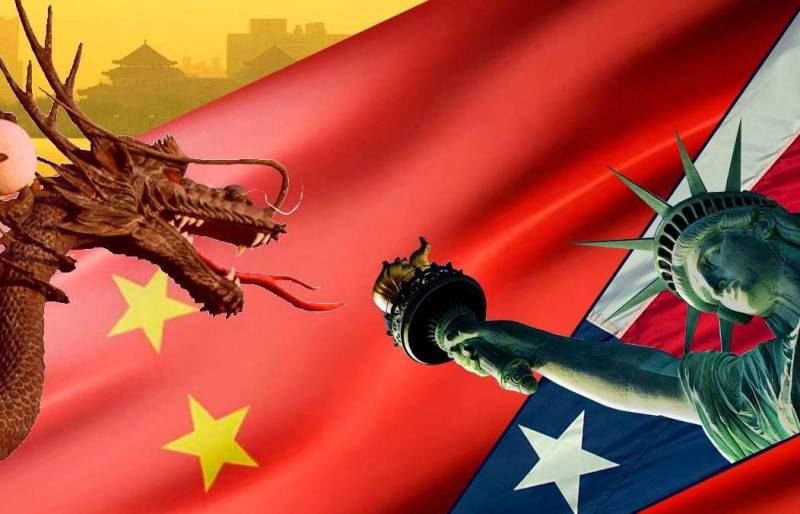 The news that Washington and Beijing have achieved at least some progress in finding mutual understanding in the way out of the two countries from lasting more than a year and a half economic confrontation caused a wave of joy and enthusiasm literally around the world. Some have already hastened to proclaim the beginning of a reconciliation between the United States and China, which should put an end to the period of instability and recession in world markets and exchanges. But this is just extremely unlikely.


If you delve into the details of the latest agreements reached between the Celestial Empire and the United States, it becomes clear: there is no talk of any peace, lasting and durable. The maximum is a truce, during which opponents will be able to take a breath, patch up their own "redoubts", and at the same time deliver more "ammunition" for new bloody and brutal fights. And they will follow for sure, because today, against the background of a relative lull on the economic “front”, another “war” erupts between the countries - a diplomatic one. So what is happening there really?

The fact that we can talk about nothing more than a temporary “cessation of hostilities” becomes clear when you consider that Washington, according to the statements of its official representatives, does not completely abandon the idea of ​​introducing new duties on Chinese goods, which were supposed to enter force from December 15. It is exclusively about the postponement of the implementation of this intention for an "indefinite period." There is still nothing to say about canceling or at least reducing the already prohibitive tariffs that Beijing so sought from its opponents in the negotiation process ... It is only known that large-scale purchases in the coming year should become a response "step towards" from the Celestial Empire agricultural products made in the USA. At a minimum of $ 50 billion a year. Moreover, as it became known, American chickens and turkeys are triumphantly returning to the Chinese market, expelled from there long before the start of the "trade war" - back in 2015 due to the outbreak of bird flu. But before the ban, the volume of poultry exports from the United States to Chinese markets almost reached $ 400 million a year. So - this breakthrough, announced by the PRC last month, is a serious achievement for the United States.

The main thing is more than timely. According to data released by the Federation of American Farmers, the number of bankruptcies of agricultural producers in the United States, from September 2018 to September this year, reached a record number in 580 cases. A little more, and the 2011 black indicator will be blocked. There is one more point - according to the forecasts of the US Department of Agriculture, out of the expected 88 billion profits that local farmers plan to get in 2019, 33 will come from various subsidies, insurance, and federal programs to promote their products. And all this, as you know, is the cost of the US state budget, and so far from surplus. It’s better to come to an agreement with the Chinese until the “rednecks” rebellion! And certainly the introduction of new duties would be suicidal for the image of the authorities, which was planned right before the start of the all-American Christmas shopping. New price tags in supermarkets obviously would not be a holiday present for US residents. It was for such reasons that Washington had already abolished restrictive tariffs last month, first by 36, and then another 32 items from China. It's simple - there is simply no replacement for the American consumer today! Do not like Chinese furniture, for example ?! Well, sleep on the floor ...

And who is easy?

This is not to say that the confrontation that has been going on for more than 16 months is not harmful to China. No matter how! Both the impressive drop in the growth rate of Chinese GDP, and the outflow of capital from the country that was unprecedented even in crisis years (more than $ 130 billion in the first six months of this year alone), and the negative phenomena in the banking system - all this is obvious. And yet, globally, Washington did not succeed either in shaking the foundations of the economy of the Celestial Empire, or in breaking the determination of its inhabitants to go their own way. However, smart people in the USA recognize this quite openly. Summing up the sanctions that hit one of the main objectives of the American attacks - Chinese technological Huawei giant, United States Secretary of Commerce Wilbur Ross confined himself to the ironic: “Yeah, they are genuinely scared ...” The corporation, which some “smarties” prophesied was almost ruin, after the market for its smartphones “shrinks to the size of China” , in the third quarter of 2019, it announced a quarter profit increase compared to last year's figures! Already in October, its worldwide sales exceeded 200 million units. American attempts to "poison" Huawei led only to a record drop in sales in the Celestial products of Apple in 5 years. The company has already announced at least 60 signed agreements for the deployment of 5G networks around the world. What are the sanctions? What are you talking about ?!

Do not forget about one more thing - Washington’s rocking of the world economic “boat” painfully hits those whom they continue to call their own allies. And who, with a knife at the throat, is required, for example, to increase the costs of maintaining NATO. Take the same Germany - according to recent research, from the "trade war" suffer serious losses of more than 80% of German companies working in the Celestial Empire (and there are many hundreds). It is especially expensive for automakers, whose cars over the past three decades have been in ever-increasing demand in the Chinese market, among other things, stably guaranteeing Berlin GDP growth. Now the situation has changed, and by the end of this year, only a quarter of German corporations, according to their own estimates, will be able to achieve planned profit targets. The same Volkswagen is already forced to "lower the bar" and precisely because of the fall in domestic demand in China. Anyway, according to the estimates of serious economic analysts, which are becoming increasingly gloomy every month, the continuation of the confrontation between Beijing and Washington could easily drive the Old World into a recession, risking being an involuntary prisoner of another’s “war”. Naturally, this does not add to the positive in the already hopeless relations between the European Union and the United States.

On the other hand, it is necessary to clearly understand that the contradictions between the United States and the PRC lie far beyond the economic and trade planes. In addition to purely mercantile moments, calculated by the amount of contracts, the volume of supplies and the size of the trade deficit, the point here is in fundamental political, geostrategic and ideological contradictions. Donald Trump can assert as much as he wants that "Chairman Xi is a great guy" and almost his best friend ... However, the same Trump, speaking at events on the occasion of the National Day of Remembrance for the Victims of Communism, said that he strives to ensure that " build a future free from the vices of communism. " Comments here, as they say, are superfluous ... And after all, his mention of "a firm intention to help provide all people with a future of peace and prosperity based on the key principles of democracy" is not just empty words, alas. The events in Hong Kong (and in the incessant riots there the "ears" of the masters of "color revolutions" from the United States stick out a mile away) demonstrate this in full measure. It is not without reason that Beijing openly declare Washington's shameless interference in its own internal affairs - and not only in Hong Kong, but also in China itself. Hua Chunying, the spokesman for the Chinese Foreign Ministry, voiced calls for the Americans to "correct their own mistakes" after the introduction of the next anti-Chinese sanctions and restrictions by the United States in October - no longer for economic reasons, but "for the persecution of the Uighurs." So what?

The voice of reason in Washington, as usual, was not heeded; Beijing went on no retaliatory measures. And now, for the first time in 30 years, two Chinese diplomats are being expelled from the US from the state of the Chinese Embassy, ​​accusing them of “spying”, no less. Officers of the diplomatic mission with families allegedly "tried to get into" one of the Pentagon bases in Virginia. Well, at least, they were near her checkpoint. Spying, definitely ... Meanwhile, anti-Chinese sentiment in the United States is growing by leaps and bounds. Thus, the Senate Standing Committee on Investigations under the leadership of Rob Portman recently “exposed” the Celestial Empire in the fact that since 2008, as part of the implementation of the Thousand Talents program, it has “encouraged scientists and researchers from the United States” to transfer to it “intellectual property, which funded by US taxpayers. ” How? “In exchange for funding their research, providing equipment for them, and monetary rewards,” is a verbatim quote from the corresponding report. So who does give the money? American taxpayers or Chinese ?! As the unforgettable professor Preobrazhensky said, “who was standing on whom” is absolutely incomprehensible ... But after such “sensations” it is not surprising that according to the results of a survey of Americans conducted by the Ronald Reagan Presidential Foundation in October of this year, 28% of respondents are the greatest threat to the USA named China and only 25% - Russia. A year ago, by the way, the ratio was the opposite: 30% were afraid of Russians and only 21% were Chinese. Progress, however.

In this situation, it is highly unlikely that normal and good-neighborly relations between the two countries in any near foreseeable future would be possible in principle. Yes, a “trade war" damages their economies, depletes them, and at the same time harms the rest of the world, creating instability and uncertainty about tomorrow. But they do not intend to give up their basic principles and recognize the primacy of the United States in Beijing for anything. Yes, in fact, China does not feel any need for anything like that. So far, they are trying to minimize their own trade losses by making small and easy concessions to their opponents (there is still something to eat!), Taking a wait and see attitude. By all accounts, in the Middle Kingdom they simply follow the dictum of one of her great sons (rumor ascribes it either to Sun-Tzu, or Lao-Tzu), regarding the river, along which the lifeless body of the offender will swim sooner or later. Such a river for the Chinese, it seems, is the US presidential election in 2020, which really could well take the current head of the White House out of sight in the form of a political corpse. The safety margin of the Chinese economy until next fall is definitely enough. And there was always no need to hold the patience of the inhabitants there ...
Ctrl Enter
Noticed oshЫbku Highlight text and press. Ctrl + Enter
We are
Trade war: why China will never make US concessions
US Global Economy: An End That Sneaks Noticeably
Reporterin Yandex News
Read Reporterin Google News
Ad
We are open to cooperation with authors in the news and analytical departments. A prerequisite is the ability to quickly analyze the text and check the facts, to write concisely and interestingly on political and economic topics. We offer flexible working hours and regular payments. Please send your responses with examples of work to [email protected]
9 comments
Information
Dear reader, to leave comments on the publication, you must sign in.