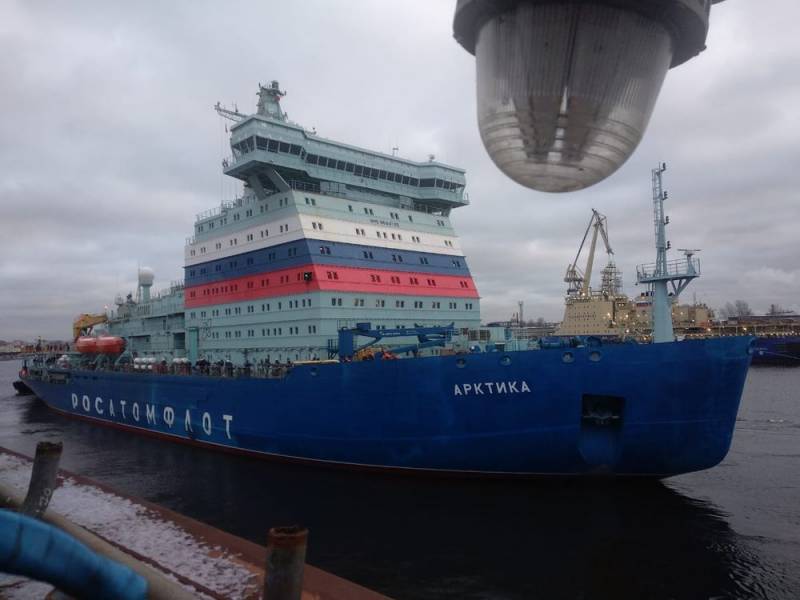 On December 12, 2019, the world's largest leading nuclear-powered icebreaker, Arktika, built at the Baltic Shipyard (part of the USC), beautifully passed under the non-adjustable St. Petersburg high-speed diameter and set off for the first stage of sea trials. According to the test program, this universal and most powerful icebreaker in the world was supposed to be in the waters of the Gulf of Finland for 4 days. But on December 14, 2019, the Baltic Plant announced that the first stage of sea trials had already been successfully completed.

On December 14, after testing was completed in the Gulf of Finland, the Arctic nuclear-powered lead icebreaker, built at the Baltic Shipyard, returned to the factory outfit
- reported from the press service.

The test program of the first stage has been successfully worked out: the move from backup diesel generators has been checked, independent speed in 6 units has been achieved. Icebreaker communications, navigation and home systems have also been shown to be successful.
- clarified from the press service.

It should be noted that the program of inspections (tests) of the Arctic icebreaker (type LK-60YA, project 22220) should be completed by May 2020. After that, the icebreaker will be handed over to the customer, the state corporation Rosatom. The icebreaker is designed to overcome even ice up to 2,9 meters thick at a steady speed. The "Arctic" is a two-draft icebreaker, i.e. in addition to working in the ocean, it can be used in river beds.