Reorganization “under Putin”: how the Constitution of Russia will be rewritten 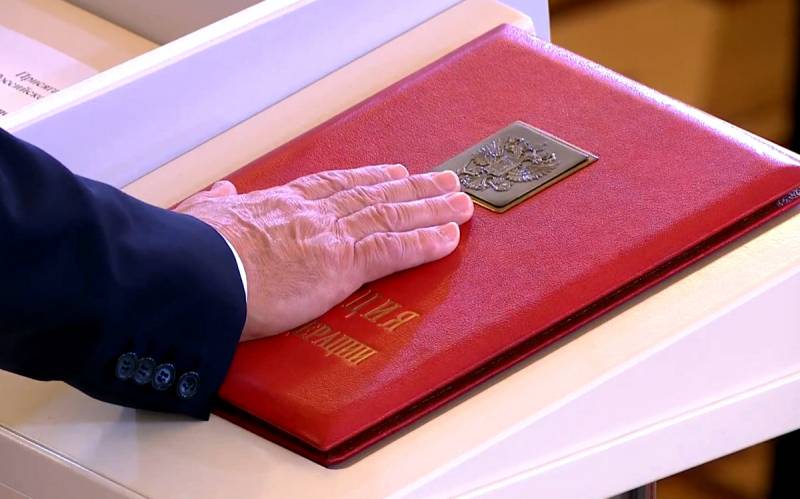 The year 2024 is approaching inexorably, and with it the problem of the so-called “transit of power”. As a matter of fact, the process of changing the highest authority in the country is prescribed in the Constitution of the Russian Federation and federal legislation. The problem is made by the desire of our "elites" to maintain power in the hands of one person, who is the guarantor of their well-being. To what can these throwings bring Russia?


Our Constitution refers to the language of lawyers as “soft,” that is, it can be changed quite freely. This has been done more than once. As soon as he took office as "locum tenens" in 2008, Dmitry Medvedev advanced the presidential term in advance from 4 to 6 years for his "senior comrade", who replaced him. In 2013, Vladimir Putin for some reason merged the Supreme Arbitration and Supreme Courts. A year later, the president received the right to personally appoint every tenth senator.

The constitution is changing relatively simply, for this power it is enough to have a qualified majority in the State Duma and the Federation Council. The theme of the urgent need for its next adjustments was raised a year ago. Valery Zorkin, chairman of the Constitutional Court, spoke of “point changes” to address the “shortcomings” of the Basic Law. President Putin called the Constitution “a living, developing organism,” and Prime Minister Medvedev talked about “updating the authorities” through amendments to the Constitution.

In general, judging by the POF polls, the population is prepared to rewrite the Basic Law, despite the fact that most of it has never even been read. What can those who read the Constitution and know the price of wording and commas in the right places can crank it up?

Among the options for "transit of power", which implies the preservation of Vladimir Putin at the helm of government, are the following.

“Under Putin,” his powers can be radically expanded by taking them away from the president, whose figure will then become nominal. The scenario is quite working, but it carries the risk of actual diarchy in a country experiencing serious socialeconomic Problems. Foreign enemies can easily play this by betting on a counterweight to the “helmsman”.

This is a variation on the theme of “castling”, successfully tested in 2008. Under him, Putin is once again the prime minister, and the “locum tenens” holds the presidency for him. But here the problem arises that the president has the right to dissolve the government at any moment. To stop such an opportunity “under Putin”, the proposal of the State Duma speaker Volodin can make the cabinet more dependent on the Parliament. That is, for its dissolution, the head of state will need the consent of the legislature, where the positions of the "party in power" will be strong. But this scenario is not optimal, since there will be no one else to “translate arrows” for problems in the economy.

It is assumed that in 2024, Putin can go "to increase." However, this option is the least realistic of all, since it rests against open rejection from Minsk, which does not want the economic absorption of Belarus from the side of the “Putin Team”.

Any law can be rewritten today, but the main problem of the "elite" is the actual lack of alternative to the figure of Putin. More precisely, it was made as such artificially, due to the consistent cleaning of the media space from any promising politicians... Meanwhile, Vladimir Vladimirovich is a person of retirement age, and he is not eternal. Moreover, according to the deputy Viktor Alksnis, "sedition" has reached the highest circles:

It may not even reach transit. Already today, according to my information, representatives of the elite are discussing in private conversations that it is time to hand over Putin. It's time to try to blame all the failures on him, and conclude an agreement with the West in exchange for lifting the sanctions.

By betting on one player, the power system seriously risks its stability. Pull it out, and everything can sprinkle sharply. One hundred years ago, the then "elites" overthrew the king, hoping to rule the country themselves, but failed. Then it turned out that "there is such a party" that was able to assemble a crumbling backward state and turn it into a superpower. Today, there is simply no “such party”.
Ctrl Enter
Noticed oshЫbku Highlight text and press. Ctrl + Enter
We are
How Ukraine break Putin's plan: six tips Zelensky
Ten "defeats" of Putin
Reporterin Yandex News
Read Reporterin Google News
65 comments
Information
Dear reader, to leave comments on the publication, you must sign in.