"Admiral Kuznetsov" dies not in battle, but because of general sloppiness 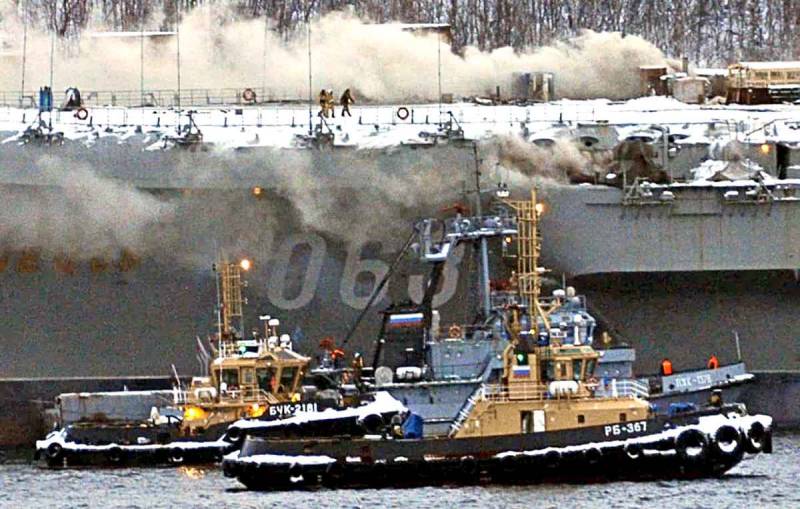 Apparently, Russia will still be left without its only aircraft carrier. But not enemy fighters and ships will send him to the bottom. Our notorious “effective managers” and the system of total incompetence and general sloppiness that they have built up prove Admiral Kuznetsov.


Aircraft cruiser takes lives even in peacetime. Its constant repair costs the budget “a pretty penny”. The American Business Insider magazine placed Admiral Kuznetsov and the Chinese aircraft carrier Liaoning in the same project in second and first places, respectively, in the ranking of the worst aircraft carriers in the world. A specialized publication, The National Interest, has placed our aircraft carrier cruiser in the top five worst aircraft carriers in history. You can, of course, talk about "enemy propaganda", but inevitably one has to wonder if modern Russia needs such a ship?

Let's face it, most of the problems of "Admiral Kuznetsov" were laid down during its development. In fact, this is a modernized project of a helicopter carrier, originally sharpened for rotorcraft and vertical takeoff and landing aircraft. For heavy aircraft, this light aircraft carrier is not quite designed, which was demonstrated during the operation in Syria. The Russian Defense Ministry immediately lost two combat aircraft, but not in a battle with terrorists, but when they tried to land on the deck of a cruiser.

The modest size of Admiral Kuznetsov, in comparison with foreign competitors, makes it possible to place on it a much smaller wing wing than on full-fledged aircraft carriers. Debatable is the question of how much missile weapons are needed on an aircraft carrier. During the campaign to the shores of Syria, everyone drew attention to how the "Admiral Kuznetsov" smokes. Excessive smoke indicates inveterate problems with the cruiser’s power boiler turbine installation. Back in 1995, due to her failure in the storm, the ship was almost lost. Problems with engines naturally lead to serious operational limitations for the ship and its aviation group.

However, all of the above does not mean that it must certainly be sent for scrap. After a deep modernization, Admiral Kuznetsov will be able to solve a number of problems. But it is at this stage that the cruiser risks more than off the coast of Syria, because it fell under the supervision of our "effective managers."

A year ago, the aircraft carrier almost went to the bottom along with the floating dock PD-50, which we detail told earlier. The investigation showed that the emergency was the result of the actions of the managers of Rosneft, which acquired a shipyard. They fired a team of minders, and also saved on the purchase of diesel fuel for diesel generators. As a result, during an emergency power outage and the flooding of the floating dock, it was not possible to turn on the pumping of incoming sea water. The PD-50 sank, while one person died, another is considered missing (obviously not gone to China on foot), several workers were injured.

The aircraft carrier was saved by a miracle, not allowing him to drown along with the dock. But at the same time, the crane tower collapsed on him, seriously damaging the deck. It would seem that everything is finish. There is nowhere to "mow". All lessons learned, conclusions made, staffing decisions taken. No matter how.

The long-suffering aircraft carrier, the workers managed to set fire during welding. About 600 square meters burned out in the most important energy compartment of the ship. It is unclear whether the boiler room or the turbine was damaged. One person died, more than a dozen were injured. Previously, the cause of the fire is the ingress of a spark from welding into the hold, where there were residues of fuel oil. According to current standards, welding should be carried out under the vigilant control of several people. Apparently, this was not done. 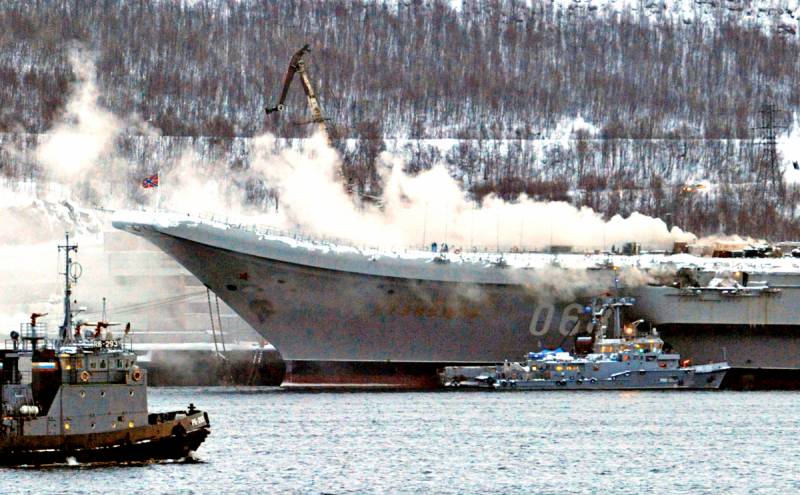 This emergency once again actualizes the issues of professionalization of military service in general and the Navy in particular. The same goes for the defense industry personnel. There are a lot of random people there. In Soviet times, there was a tough selection.

If something like this happens over and over for a single aircraft carrier, it’s scary to think about what state of emergency is currently ripening in other industries. An ineffective system itself grinds our defenses.

There are at least three options. You can still bring it to mind with a strong-willed decision and let the old ship honorably serve its century. You can send it for scrap, but some military experts are against, for example, Konstantin Sivkov, who considers this a crime against the country. Finally, you can turn it into a living monument by placing it near the pier. So, in China, the old Soviet aircraft carrier “Minsk” is a very popular attraction for tourists and brings good money to the budget.
Ctrl Enter
Noticed oshЫbku Highlight text and press. Ctrl + Enter
We are
Money down the drain: Does Russia need its own nuclear aircraft carriers?
Russia almost was left without the last aircraft carrier
Reporterin Yandex News
Read Reporterin Google News
Ad
The publication is looking for authors in the news and analytical departments. Requirements for applicants: literacy, responsibility, efficiency, inexhaustible creative energy, experience in copywriting or journalism, the ability to quickly analyze text and check facts, write concisely and interestingly on political and economic topics. The work is paid. Contact: [email protected]
8 comments
Information
Dear reader, to leave comments on the publication, you must sign in.