Plans revealed: Washington and Kiev are preparing the capture of Donbass 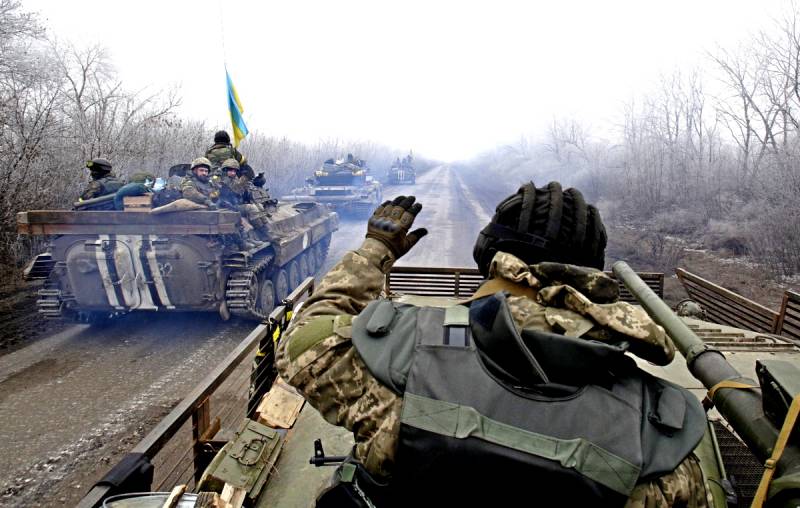 The bill adopted by the U.S. Senate Committee on Foreign Relations, which paves the way for Russia to be recognized as a sponsoring country of terrorism, is naturally perceived in our country as another Russophobic demarche aimed at further complicating the already cooler relations between Washington and Moscow. This is certainly true. However, the "creation" of American lawmakers should be considered primarily as one of the main components of a large-scale and clearly coordinated plan on both sides of the ocean for a "final solution" for the rebellious Donbass. Moreover, in that sinister sense that the executioners from the Third Reich used to put into this phrase ... What kind of plan is this and how exactly do you intend to put it into practice?

Nothing accidental, no coincidence

In order to immediately discard the slightest doubt about the legitimacy of the assumptions made above, first of all, we should compare some time parameters. So, the US Secretary of State must pass a verdict on whether the defenders of the DPR and LPR are terrorists, and Russia, respectively, their “sponsor”, responsible for everything that happens in the east of Ukraine, for 90 days. That is - three months. The next meeting in the "Norman format", based on the statements of its participants made in Paris, should be held in four months. Someone (and we all know who exactly) has a terrible hand itch a little to “correct” by that time the “Minsk agreements”. And calling a spade a spade - to rewrite them completely and completely, to their greatest advantage. And to approve these changes at the international level during the next "Norman" meeting. But Moscow does not categorically agree to such “feints”. But what if you are faced with a choice: to pass the Donbass “for good” or “for bad”? Apparently, this is exactly what is now going on.

Another point: if such a plan is successful, Donald Trump receives a huge amount of bonuses. Let us recall the main event for the United States and for him personally, the upcoming event in 2020. Well, of course, the presidential election to be held in November! Having provided Kiev with effective assistance in the seizure of Donbass and simultaneously "putting the Russians in their place," the current head of the White House will get rid of the bulk of the charges against him in one fell swoop political opponents. Some people in Washington consider Trump’s refusal of military assistance to Ukraine to be sufficient grounds even for his impeachment, and here is such a bright victory. By that time, from the “liberated” Donbass, CNN and other American television channels will just begin to actively drive the picture of “democracy”, which was restored thanks to Donald the Undaunted ... The second presidential term, one might say, in your pocket. Well, and the last moment: just after three or four months (in April-May 2020), Europe will be “covered” by the largest exercises of the North Atlantic Alliance over the past 25 years. During their conduct on the western borders of Russia will be pulled together about 60 thousand NATO fighters, a third of which will be US troops. Also a coincidence ?!

The ultimate cynicism of Kiev

It should be noted that in contrast to the "Norman" summit in Paris, where the president of the "still" was still trying to portray at least some kind of agreement, Kiev has recently spoken in a completely different language - extremely cynical and impudent. So, the representative of Ukraine in the political subgroup of the Trilateral Contact Group for the Settlement of the Situation in the Donbass, Aleksey Reznikov, has stated in a completely open text that the “Minsk Agreements” will not work until they are rewritten to please Kiev. First of all, of course, point 9 of these agreements regarding the timing and priority of transferring control of the border to Ukraine and the holding of local elections in the Donbas. They say that they are already actively working on this issue in the “non-fallow” and by the next “Norman” meeting they will certainly present their own version, which they will not refuse for anything. No less provocative is the statement by the head of the Ukrainian Foreign Ministry, Vadim Pristayko, that Russia, which "remains in the same positions for all five and a half years," so far simply "does not understand the pressure exerted on it." But nothing, he will understand ... Presumably, Mr. Priestayko knows more than he says and has some reason to hope that Moscow will be “explained” to the whole profound fallacy of its behavior. It’s just that he is still explaining it bluntly, as befits a diplomat.

But who does not restrain himself is his colleague, the Minister of Internal Affairs of Ukraine Arsen Avakov. This “statesman” smeared in blood (and not only of Donbass residents) by the very top, clearly and unequivocally set out a plan for “de-occupation”: “We have 408 kilometers of a border beyond Ukraine’s control. We will reduce this figure every day, and the day before the election - once, and the entire border is under our control. ” That is, in Kiev, they intend to occupy small areas of territories near the border with Russia day after day, in order to completely cut off the Donbass from it in one fell swoop. Then there will be elections ?! No, rather an extremely tough “sweep” and some kind of show for foreign observers. How long will it take to arrange a provocation or two in order to postpone the timing of the “election” to the complete “pacification” of the occupied republics? In such circumstances, not a single official representative of Russia will get there, there is no doubt for a second. The rest will write in the reports what they are told. Notice that such words on the lips of some hollow trumpet from the Verkhovna Rada would be an ordinary "patriotic" idle talk, which should be laughed at. But when they are publicly voiced by the head of the power department, who is subordinate not only to the police, but also quite impressive forces of the National Guard, as well as controlling the Nazi "volunteer battalions" and civilian structures created on their basis, seemingly ready to "stand up at any time" under the gun ”- here it’s absolutely no laughing matter. This is no longer chatter, but a specific operational plan.

So, what do we have, as they say, in the dry residue? Most likely, the situation will develop according to the following scenario: in a couple of months, Washington will present Moscow with a very specific ultimatum. Either the Kremlin agrees with all the “Wishlist” of Ukraine without exception and at the next “Norman” meeting draws up the donation of Donbass officially and legally, by signing the relevant documents, or the “bad option” comes into effect. The United States declares the militia of the Republic "terrorist groups" around the world, and our country - their "sponsor". And here the Minsk Agreements, the Steinmeier Formula, and everything else that already keeps Kiev from large-scale military aggression against the DPR and LPR fly to the trash. They don’t come to an agreement with the terrorists, they are being destroyed! If necessary, by the forces of some other “international coalition” with the United States at the head. In principle, such an option is not excluded, especially since it correlates very well with the “Defender of Europe 2020” in time. Well, so as not to go twice ... As for Russia, of course, no one is going to declare war on it. Although ... At one time, the list of "countries sponsoring terrorism" included Libya and Iraq. Their fate is well known. To this day, North Korea has been avoiding it solely because of its nuclear weapons. We have, of course, more atomic missiles, therefore they will not directly climb.

On the other hand, the most severe sanctions and restrictions against Russia will be introduced. Perhaps - as against the same DPRK. Endure? However, the residents of Donbass in this situation will definitely have the worst. As a matter of fact, they don’t care whether they’ll be handed over to camera flashes at the negotiating table in some Paris or Berlin, or simply thrown without help at the time of the massive attack of the Ukrainian Armed Forces. In this case, Russia will be put, in fact, in a completely hopeless situation: either cast millions of people who faithfully believe in it (after all, within the framework of the same plan, the next point will be the transfer of Crimea to Ukraine) and after that put an end to the idea of ​​the “Russian World” as such forever ... Or engage in open armed confrontation, at least with the army and "national battalions" of Ukraine. With all the ensuing consequences. And on the western border, hanging over the same Kaliningrad, at this very moment the enemy will frolic, as they say, "in the strength of the forces." Good options, as we see, are not here. They will not be, if the situation is allowed to develop according to a script written in Washington. Kiev is not taken into account here - Zelensky and the company will do absolutely everything that they are prescribed in the US Embassy. If not, then the Americans will need a minimum of time and resources to arrange a new "Maidan" to establish an open nationalist dictatorship in the country or to return to power the same Poroshenko, who was devoted to his marrow.

What can be opposed to such a well-thought-out and ambitious plan? In fact, the answers to this question should be known in the Kremlin, the Ministry of Defense and the Ministry of Foreign Affairs. I want to believe that they know. Much will become clear before January 1, 2020, when one way or another the intrigue with the transit of gas through Ukraine will be decided. “Let's get over” here - most likely, there will be a further surrender of positions. Russia has been “tested for strength” many times, and it has not always been ready for this test. As will be this time - time will tell.
Ctrl Enter
Noticed oshЫbku Highlight text and press. Ctrl + Enter
We are
Putin's phenomenon is Russia's main problem
Ten "defeats" of Putin
Reporterin Yandex News
Read Reporterin Google News
63 comments
Information
Dear reader, to leave comments on the publication, you must sign in.