Defeat or ultimatum: with what Lavrov traveled to Washington 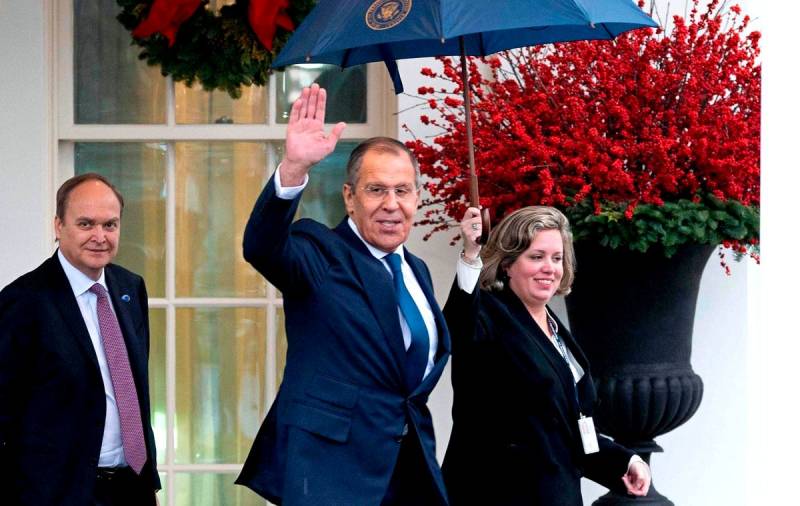 An official visit to the United States by Russian Foreign Minister Sergei Lavrov caused a real storm in the American media, but was practically ignored by the domestic media. The reason is simple: if the US newsmakers, whom, incidentally, no one thought to call the head of the White House and the head of our Foreign Ministry, came up with interpretations for her, “revealing” the explicit and even secret meanings of this rendezvous, then their Russian colleagues seem to while being perplexed. The fact that Mr. Lavrov’s trip, which interrupted an almost two-year pause in Russian-American communication at the highest level, is much more important than a simple protocol visit, it’s clear even to a child.


However, with what did the chief diplomat of our country come to Washington in such a difficult time for relations between the two world powers? “Peace initiatives” and “discussion of ways to resolve regional conflicts” - all this, of course, is important. However, these topics are only a “facade”. What is hidden behind him? What awaits the United States and Russia after this meeting - a new round of conflict or a reduction in tension?

An afterword to the “Norman” summit?

Sergei Lavrov’s visit to the American capital is given a very special connotation by the fact that he arrived there directly from the Norman Four summit in Paris, which did not have a single US official representative, but their influence was clearly felt. The bottom line is that with all its high official status, the "Norman" negotiations, in fact, resulted in an empty event, which ended in nothing. Obviously, precisely because of this, Lavrov was forced to visit Washington to discuss the positions of states with an interest in the events in Ukraine and real leverage over it. Without this, it would not be easy for Moscow to develop a long-term strategy and make final decisions in any case. As a matter of fact, US Secretary of State Mike Pompeo, with whom Lavrov had a much longer and more detailed discussion than with the American president, stressed that the topic of Ukraine was almost the “main part” of their conversation. Based on the fact that, according to the head of the State Department, he "once again reminded the interlocutor of the Ukrainian identity of the Crimea," this conversation was not at all pleasant. The call for a “settlement of the conflict” with Kiev, it seems, came from the head of the White House. Apparently, the US position on this issue, or rather, on a fairly wide range of problems associated with Ukraine, remains unchanged. Washington is ready to continue to unconditionally and blindly support "its bastards", exposing our country as the culprit of all their troubles.

But the "ball", relatively speaking, is now on the side of Russia. The consistent upholding of her justified position in the "gas" dispute with Kiev, in theory, should almost inevitably result in the cessation of transit of our "blue fuel" through the Ukrainian gas transportation system from January 1, 2020. In this case, the most unpleasant consequences are expected to be most unpleasant - from an energy collapse to a serious domestic political crisis that could lead to another spontaneous change of power in this country. However, little in this case will not seem to anyone. According to a study published by the Institute of Study economics energy at the University of Cologne, the financial losses of Ukraine from the termination of transit will be the smallest - half a billion euros. Another question is that for an already "breathing" economy of this country, the figure may turn out to be critical ... However, according to German scientists, the countries of the European Union will have much more salt - this situation can cost from 1.5 to 2.1 billion Euro. Depending on how severe the winter will be and how stable the deliveries through other channels will be. However, the most painful thing, according to Germany, is the stop of Ukrainian transit that will hit Gazprom itself. Its losses due to the reduction in gas sales there are estimated at 3.4 billion euros. Perhaps the head of the domestic Foreign Ministry had the goal of trying to convince Washington that taking a more constructive and realistic position in negotiations between Naftogaz and Ukraine was in the common interest? If so, then, I'm afraid he flew there in vain. To ask the White House to admonish its own “sponsored” people in Kiev is empty, since the US goals in this scenario are diametrically opposed to the interests of all other parties. It’s just the above negative consequences that will only be on hand ...

There is always much worse ...

Today, it would be possible to characterize Russian-American relations with the words “there is nowhere worse,” if it weren’t ... If it hadn’t been for the fact that there is still much worse than that. The visit of the head of Russian diplomacy overseas took place against a background of very unpleasant events and even more alarming prospects. WADA’s absolutely unfair, politically motivated and clearly discriminatory decision, inflicting another blow on Russia's international sports prestige ... Forced promotion of the Berlin Skripal case, the killing of which is extremely similar to the operation of US intelligence agencies to further discredit our country ... This is it’s time in the Senate of the United States that the Russophobic lobby makes new active attempts to push through the parliament three bills at once, the adoption of which may be for our country really painful. We are talking about the “brainchild” currently under consideration by the Senate Foreign Affairs Committee Lindsay Graham and Bob Menedes S.482, Defending American Security from Kremlin Aggression Act of 2019, DASKA, the so-called “infernal sanctions”, with which these two are patented Russophobe rush for almost a year. Well, hellish or not hellish, but they certainly will not benefit the Russian financial sector. This bill provides, in fact, its expulsion from the global system of dollar settlements, a ban on investment in domestic public debt (including in ruble securities) and extremely severe restrictions on the Bank of Russia to attract foreign loans. And at the same time, there are restrictions for domestic shipbuilders and the “cybernetic sector”.

Few people in our country will be pleased with the bill of authorship of Senator John Barrasso S.1830 Energy Security Cooperation with Allied Partners in Europe Act of 2019. Here it is planned to strike at all partners of Russia in the field of pipeline construction, as well as those who cooperate with it as part of other projects for the extraction and export of energy resources. At the same time, as you might guess, it is proposed to sharply increase the supply of energy carriers (primarily LNG) to the United States to Europe. Well, S.1189 Stopping Malign Activities from Russian Terrorism Act by Senator Corey Gardner can perhaps be recognized as the peak of such legislation. It’s just “tin” ... This project proposes to oblige the US State Department to “determine” for three months whether Russia controls the “militants operating in the East of Ukraine”. And if the answer is positive (and what it can still be like under the current total Russophobic hysteria!), Without further ado, recognize it as a “state sponsor of terrorism”. Further, regarding a whole heap of unpleasant consequences, I think there is no need to explain. And by the way, discussing the above bills, senators from the international committee simultaneously approved another one - on the imposition of sanctions against individuals and legal entities of Russia, “providing significant financial, technological or material support to the Syrian government. ” Pripily ... Of course, all these intentions are not yet a reality. Last year, for example, in the American Congress, both members of the lower house and senators introduced a dozen similar Russophobic initiatives, but not one of them came to a real vote. Also, the second round of sanctions was not implemented for the "poisoning of Skripal", which "hung" already in the White House. Nevertheless, the constant prospect that such "Damocles' swords" will nevertheless fall upon Russia is more than relevant.

In the United States, perhaps the greatest indignation of the "progressive public" was caused not so much by the fact of the visit of the head of the Russian Foreign Ministry as by the fact that he coincided with the demand proclaimed by the Democratic Party in the House of Representatives of the American Parliament to impeach Donald Trump. Their "mouthpiece" in Congress, "Russia's best friend" Chuck Schumer, has already rushed to announce the meeting of Donald Trump and Mike Pompeo with Lavrov no less than a "conspiracy." But what kind of conspirators are they - they cannot come to a "common denominator" about the most elementary things! Immediately after the meeting, Donald Trump quickly blurted out on Twitter that he had "strictly warned" the interlocutor "about the inadmissibility of interference in the American elections." To this Sergey Lavrov replied that nothing of the kind was discussed at the meeting, and in general there is no subject for conversation in this case, since there is no evidence of "interference" as such in nature. Subsequently, at a briefing at the State Department, Mike Pompeo tried to prove that Trump was speaking the truth. And again he repeated the thesis about the "mass of evidence of interference", which, as usual, did not bother to present. But it is not clear who the head of the State Department is trying to "drown" with such statements - Lavrov, or is it his own president ?! It is precisely because of the new accusations that Trump sounded after the Russian Foreign Minister’s visit to Washington that he was “Putin’s agent,” some in the United States itself suggest that for the American president this meeting is just another way to proclaim his own political opponents.

Some experts are even inclined to believe that "getting rid of the main" hawks ", like Bolton and Mattis, who did not allow him to build normal relations with Moscow, Donald Trump intends to" lend a hand to Russia. " Extremely unlikely option. The euphoria that once reigned in our country about the election of this president was dispelled very quickly - and there was a reason. We have never seen as many anti-Russian sanctions as were introduced while he crossed the threshold of the White House. However, that’s exactly what Sergey Lavrov said while still in Washington. At a press conference there, he said that under the current American government, "the ongoing work on the destruction of US relations with Russia, begun by the Barack Obama administration." However, the Foreign Minister immediately emphasized that somehow our country will survive this. And even though the American leader called the meeting “very good,” while the Kremlin spoke of it as an “important moment”, both sides admit that there is no need to talk about any “positive shifts” in relations. Perhaps the main point that Sergey Lavrov tried to convey to his interlocutors in Washington was the readiness of our country to extend the START-3 treaty "in any form." However, even in this moment, it seems that progress has not been achieved. Instead of “curtailing the development” of the latest weapons like “Vanguard” and “Poseidon”, about the possibility of which, shortly before the visit of the head of our Foreign Ministry to the United States, rumors spread in the domestic media, Russia, perhaps, should expedite their adoption. Actually, this kind of action will be the best proof that Sergey Lavrov traveled to the United States for anything, but not to declare Russia's readiness for surrender.
Ctrl Enter
Noticed oshЫbku Highlight text and press. Ctrl + Enter
We are
Ukraine from the inside: traitors, curators and those who watch from the Kremlin
Ten "defeats" of Putin
Reporterin Yandex News
Read Reporterin Google News
21 comment
Information
Dear reader, to leave comments on the publication, you must to register.
I have an account? Sign in