Boeing will not take off this year. But it will not crash 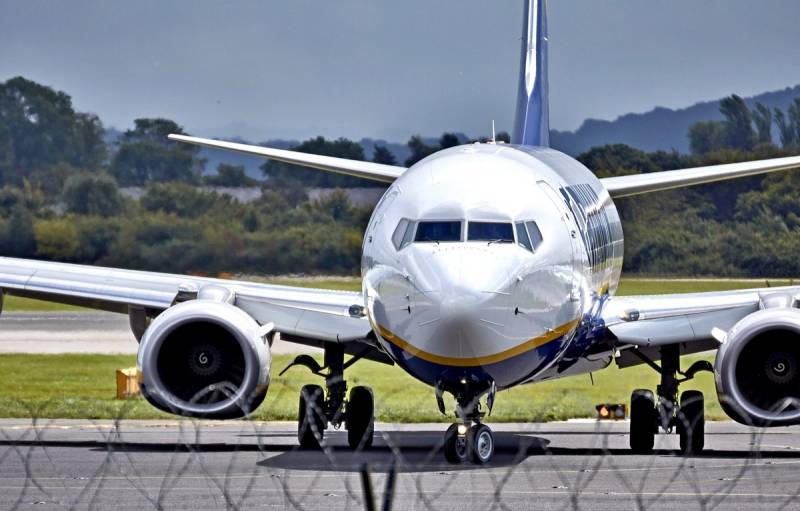 A new attack is about to fall on the American Aircraft Corporation. As if the company suffered tremendous losses this year as a result of the ban on flights of the Boeing 737 MAX, the United States Federal Aviation Administration (FAA) recently announced its intention to recover an additional fine of $ 3.9 billion from it. The reason is the installation of obviously low-quality parts on more than 130 aircraft, the defects of which were hidden by the aircraft manufacturer.


It is very likely that after the scandalous story with the “killer program” that led to two 737 MAX disasters, Washington controllers intend not only to “disassemble” each of the winged cars that came off the assembly line of the goofy corporation, but also to recover from it for every shortcoming they discovered in the most severe way. How can this affect the future of one of the world's leading aviation manufacturers equipment?

When the process of investigating the causes of the crash of the Boeing 737 MAX in Indonesia and Ethiopia was just beginning to “spin up”, the corporation's mood was more or less optimistic: “Just think, disasters ... We will compensate for the compensations, we will eliminate the shortcomings, we will invest additionally in the advertisement and everything will be at its best! ” However, everything turned out far from so easy and simple. And the point is not even the number of victims of these incidents, estimated at three and a half hundred people almost. Alas, planes have been falling since the very first one flew into the air, and people die almost always. There were tragedies with a large number of victims, although both disasters have already been included in the list of the hundred most bloody ... The thing is that in both cases it was not a fateful combination of circumstances that caused the fatal accidents, not the pilots' mistake or something like that, but notorious the actions of aircraft manufacturers, who decided to fix their own “jambs”, which were allowed in the design and construction of the airliners, by installing a very “smart” computer program, which turned out to be ultimately not fatal, but fatal. Moreover, the FAA drove the same nose, not to mention airlines, pilots and passengers. In just one year, Boeing managed to lose the trust and respect that it has earned since its inception - a hundred years.

It is precisely because of this that now every node, every detail in its aircraft is checked and rechecked more than once and with obvious bias. Considering how many systems and assemblies are contained in a modern airliner that can (and should!) Be repeatedly tested for strength and reliability, encouraging statements were made from time to time on behalf of the company that the FAA could allow flights 737 MAX even before the end of this year, look completely inappropriate optimism. As well as the hope expressed by Boeing representatives on November 11 that the “good” to resume deliveries of this model airliners (including its new version, the largest one recently presented in the narrow circle at the corporation’s factory in Renton) will be given by federal officials as early as December. Recently, even the American media have not seriously considered such prospects. In particular, The New York Times at the end of last month expressed great doubt that the 737 MAX would take off even in January 2020. But this was originally considered the deadline ... In the meantime, any attempts by the company to “speed up the process” are smashed by the FAA’s reinforced concrete stubbornness: “No one will fly anywhere until we finish all the tests.” However, Boeing even tries to turn this situation into their own advantage, proclaiming in advance that after a series of “incredibly strict checks”, the 737 MAX can be considered almost “the safest aircraft in the world.” Well, we’ve heard something similar from them ...

The loss of confidence in such an extremely delicate and responsible matter as the aircraft industry is similar to any manufacturer, as they say. Moreover, informational blows, such as the publication of official conclusions about the causes of disasters in Indonesia and Ethiopia, which do not color its official conclusions about the causes of disasters in Indonesia and Ethiopia, are extremely negatively affecting the company's image and business reputation, and internal scandals have begun to torment the corporation. So, it became known that in addition to the lawsuit with four hundred pilots from around the world who sued Boeing for the fact that their lives were consciously endangered, the corporation also received a lawsuit from one of its own shareholders! He accuses the company's board of directors of "criminal inaction", which entailed two plane crashes. However, the main essence of the claim is that, in the opinion of the Boeing shareholder, its management “unacceptably delayed the investigation of the causes of the incident”, thereby “spoiling the company's reputation”, introducing it at a loss, and, accordingly, causing direct damage to it, as to the shareholder. It is clear that this lawsuit is unlikely to be the last straw for the corporation, which does not have time to count the money for various compensation payments, however, it certainly will not go to the benefit of its already tarnished reputation. Even the most desperate attempts by Boeing to save the situation are of little help in this matter, such as the oath of promise of its representatives to invest at least a billion dollars in a kind of “global project to improve aviation security”. True, they intend to do this only after the lifting of the ban on the operation of the 737 MAX.

However, according to a well-known saying, there is no faith once to those who have lied. The same US Federal Aviation Administration, as mentioned above, which aims to fine the corporation by almost 4 billion, blames it not only for not tracking its own suppliers, which “obviously” made substandard components that did not meet the requirements of the company to quality, but something more serious. Yes, 133 aircraft of the 737 MAX and 737 NG models received "improperly manufactured" parts for slats, which, according to experts from the FAA, could simply fall apart right in the air ... But the main charge is different: the controllers are confident that the corporation filed an application for the final certification of these aircraft, already knowing for sure that they have defective parts that do not withstand strength tests. In Boeing, which has a month to challenge these extremely unpleasant conclusions, they deny them in the most categorical way: they say that the problems have been fixed, and we have already "resolved" them with the airline customers. It is difficult to predict whether the company will be able to avoid a new reputation and financial blow. Sometimes it feels like she is being pursued by real evil rock. One of the latest incidents with their aircraft, albeit outdated, 777 models occurred on November 21. Then another tragedy almost ended flight Philippine Airlines PR113, passengers who traveled from Los Angeles to Manila. After the liner took off, there was an explosion, and then a fire of its right engine. Fortunately, thanks to the professionalism of the pilots, there were no casualties. But the name Boeing again sounded not in the best context.

On the anniversary of the first fatal plane crash, Boeing CEO Denis Muilenburg had to testify before members of the US Senate Commerce Committee. The vice president of the company, one of its chief engineers, John Hamilton, also took part in this unpleasant event. What is very characteristic, no details of the hearings on that day could be found out even by the almost ubiquitous American press. However, it is not surprising - when it comes to moments, firstly, completely not painting one of the recognized symbols of the United States, and, secondly, really relating to the national security of the country, the veil of secrecy remains impenetrable for both the media and society. And the fact that the survival of Boeing is critical not only for its employees and shareholders, but for all Americans, there can be no doubt. In the unanimous opinion of serious experts, the bankruptcy of this corporation will inevitably become economic Armageddon for the United States. This is not a couple of “bursting” shale oil companies that are created and destroyed by hundreds of flies like flies. Here we are talking about the basics. And while the feds from the FAA are shaking the soul out of the corporation, Pentagon generals are rushing to the rescue with officials from the State Department. Not only the US armed forces, but also their NATO allies, whose members will have to participate financially in this rescue in the near future, are joining the salvation of "Private Boeing".

In the last days of November, at the Melsbruck military base in Belgium, in the most solemn atmosphere, President Boeing International Michael Arthur and Secretary General of the North Atlantic Alliance Jens Stoltenberg signed a billion-dollar contract for the improvement of the AWACS long-range control and distant detection aircraft in service. Representatives of the high contracting parties even made a memorable photo against the backdrop of one of these “sides”, and the Secretary General burst out with a speech befitting the occasion, in which he called AWACS “NATO's eyes in the sky”, mentioning that these spy planes “have been supporting Alliance operations for decades” . The North Atlanticists today have 14 machines of this type (Boeing E-3 Sentry), and, given that the program for their use was launched back in the Cold War, in 1982, it’s a little bit to “remake” these flying “old men” it's time. According to NATO plans, having undergone a “deep modernization”, the available AWACS will be able to remain in service until at least 2035. By the way, as it became known, in the process of improvement they plan to install certain “important services controlled by artificial intelligence” on them. It’s interesting if the Boeing specialists of the Alliance’s military pilots will “make happy” with some kind of “cute” program like MCAS, which could easily kill two 737 MAXs ?! In truth, the emergence of problems with NATO with its "flying eyes", which are unambiguously modernized for use against Russia, I personally will not cause much sympathy, excuse me ...

In any case, even while still partially chained to the ground, Boeing does not give up and continues to hope that he can spread his wings again. The main thing is that, if this happens, the wings are reliable. To do this, corporations must draw conclusions from what happened not in words but in practice, and stop the dangerous "experiments", which, in fact, are a game with human lives.
Ctrl Enter
Noticed oshЫbku Highlight text and press. Ctrl + Enter
We are
Boeing slaughtered: the fall of the aircraft giant continues
Legend catastrophe: Boeing suffers one defeat after another
Reporterin Yandex News
Read Reporterin Google News
3 comments
Information
Dear reader, to leave comments on the publication, you must sign in.