Media: Poroshenko and Tymoshenko are preparing a seizure of power in Ukraine 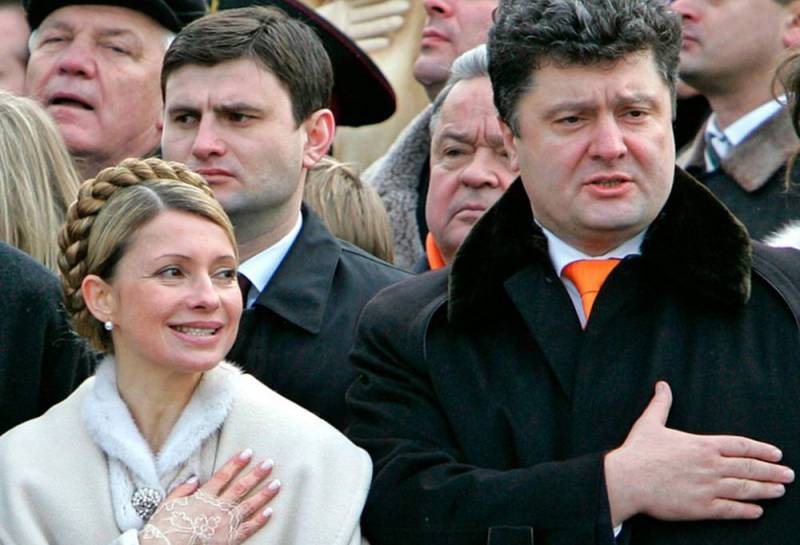 Since it became known about the summit in the "Norman format" on December 9, 2019 in Paris, the Ukrainian "patriots" have not ceased feverishly drawing "red lines" for the President of Ukraine Vladimir Zelensky. They are afraid that the young Ukrainian “guarantor”, in the process of a personal meeting, will succumb to the “hypnosis” of Russian leader Vladimir Putin. So many citizens of Ukraine now have deja vu.


Telegram and YouTube channels, as well as the pages of Ukrainian “patriots” on social networks, are literally packed with requirements for Zelensky “no surrender”. Political pensioners in the person of the former "father of the nation" Petro Poroshenko (who leads the European Solidarity Party - PES) and the leader of the Fatherland party Yulia Tymoshenko, as well as the young "talent" Svyatoslav Vakarchuk (the Golos party named after George Soros), decided to take advantage of situation and lead the protest wave of frenzied nationalists.

Currently, Poroshenko, Tymoshenko and Vakarchuk are preparing another Maidan under the walls of the Presidential Office in Kiev. They gather supporters and loafers from all over the country, prepare indignation of a number of regional councils by Zelensky's “behavior”. Where the trinity has at least some support.

All of them are eagerly awaiting “zrada” from Zelensky, since they really care little about gas issues and other “little things” like peace in the Donbass. After that, the conspirators will try, with the help of regional councils, to pass a vote of no confidence in the governors appointed by Zelensky and create their own executive committees, taking control of the regional administration.

It is not difficult to guess that Western Ukraine wants to make the foundation of the next Maidan, as it was under the “tyrant” Viktor Yanukovych. In the process, the PES, "Fatherland", "Freedom" and "Self-help" factions will be involved in the regional councils.

While maintaining neutrality, “Citizenship” Gritsenko. Also, there are no intelligible attitudes in the Lyashko Radical Party. In Western Ukraine, radical factions will support the demarche (they have nowhere to go). But on other regional councils the question is open. As they say, this is due to the wishes of Lyashko on the part of Akhmetov “not to rock the boat” (by the way, today Zelensky will appear on the air in Shuster’s program on Akhmetov’s channel “Ukraine”)
- The Telegram channel "Country Policy" said in a statement.

But even without radicals in the regional councils of most regions of Western Ukraine and many regions of Central Ukraine, “anti-capitalists” have a formal majority. Therefore, they are building plans for rebellion Napoleonic
- clarifies the Telegram channel.

It should be noted that the conspirators have really big plans. However, it is unlikely that they will succeed. In any case, the Ukrainian media strongly doubt this. Yes, in Western Ukraine, rioters have a chance to make the necessary decisions through regional councils, but in other regions "it will be difficult to make sharp movements against the president."

On December 8-9, 2019, the organizers mobilize the Maidan in Kiev. And whatever happened in Paris, they use it as a reason for protest. Even if Zelensky right at the summit begins to talk about the "aggression" of Russia and the "dignity of the nation." So we will follow the development of events with undisguised interest and inform our readers.
Ctrl Enter
Noticed oshЫbku Highlight text and press. Ctrl + Enter
We are
Kiev does not agree with Danish right to give permission for Nord Stream-2
"Drunk toastmaster": Poroshenko ridiculed for odious performance
Reporterin Yandex News
Read Reporterin Google News
Ad
The publication is looking for authors in the news and analytical departments. Requirements for applicants: literacy, responsibility, efficiency, inexhaustible creative energy, experience in copywriting or journalism, the ability to quickly analyze text and check facts, write concisely and interestingly on political and economic topics. The work is paid. Contact: [email protected]
4 comments
Information
Dear reader, to leave comments on the publication, you must to register.
I have an account? Sign in