"Norman Summit": no one is going to negotiate with Russia 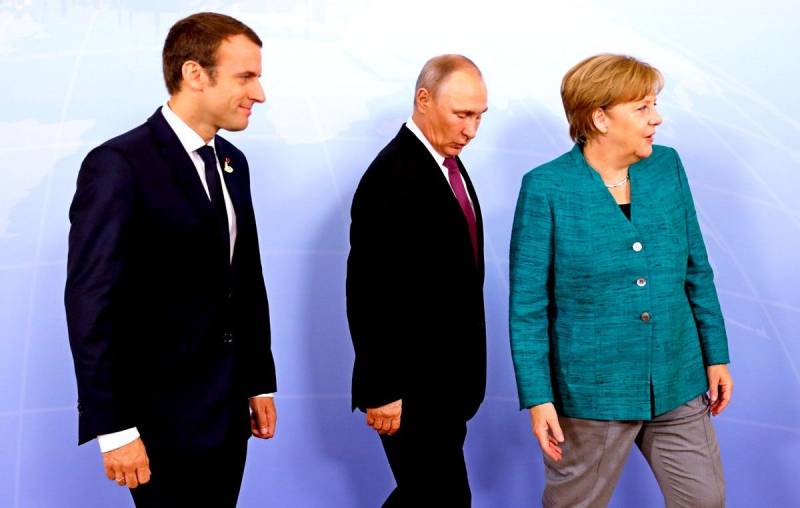 Special hopes for a meeting in the "Norman format", scheduled for next Monday, December 9, as a matter of fact, no one had originally laid. The euphoria that appeared to some people after the change of the “first person” in Ukraine was dispelled quickly enough, since this is the “first” with its every statement and practical step related to the situation in the Donbass and Ukrainian-Russian relations, “is losing face” More. Only one story with the "Steinmeier formula" was supposed to cool the ardor of the most recorded optimists.


And after the “toilet hysteria” of Kiev, arranged in response to a gesture of goodwill in Moscow in the form of transferring violating vessels to it, the last doubts disappeared. Moreover, the whole chain of events of recent days gives every reason to believe that the summit in Paris will most likely not be a move towards resolving the situation in the East “unbroken” and smoothing out “sharp corners” in relations between our country and the West, but, on the contrary, the beginning a new round of conflict and another violent Russophobic campaign.

If we summarize all the recent statements on topics related to the subject of the future meeting made both by the president and other high-ranking officials of Ukraine, a logical question arises: what should Zelensky do in Paris? Well, except to see the sights ... In principle, the words of the same Foreign Minister of Ukraine Vadim Pristayko would have been more than enough. The chief diplomat of the "unbroken" said that Kiev will not "adopt a new law on the Donbass," that is, to make, as provided, the corresponding amendments to the Constitution of the country. And also - to negotiate with representatives of the Republics. In general, any elections there are possible only "after Ukraine gained control of the border." This statement alone completely resets all formats - both “Minsk” and “Norman”. It, in fact, brings their participants back to the beginning of the game, from which everyone is already extremely tired. We add the words of Zelensky himself about the “uselessness” for the authorities of Donbass residents who are not “good Ukrainians” and other similar attacks, like the accusations of “terrorism” of our country that were voiced the other day at the NATO summit in London ... Do not forget about becoming more and more aggressive actions of the Armed Forces on the demarcation line ... And as a result we get a fairly complete picture of the positions from which Ukraine intends to act in the capital of France. However, Kiev, which has long lost the status of an independent foreign player, in this case does not solve anything.

The reasons for such reckless, impudent and absolutely unconstructive behavior should be sought, of course, in those instructions and “instructions” that come from Washington. Moreover, the United States does not even think of hiding its interference in the "Norman process", to which they de jure, have nothing to do. Thus, the Acting Assistant Secretary of State for Europe and Eurasia, Ambassador Philip Ricker, speaking at the OSCE Ministerial meeting in Bratislava, clearly and unequivocally stated that “political aspect of the “agreements in the Donbass (both Minsk and any other)” should be implemented only after the security conditions allow it. ” This is nothing but the open support of the “Wishlist” of Kiev regarding the immediate transfer of the border to it. In addition, Ricoeur blamed “the actions of one single country - Russia” for the conflict in the Donbass. Alas, the overseas guest came along immediately: the EU High Representative for Foreign and Security Policy, Josep Borel, hastened to reproach our country with "violation of international law and principles", as well as "annexation of Crimea and" destabilization of Eastern Ukraine ". The most, perhaps, openly behaved US Chargé d'Affaires in Ukraine, William Taylor. Obviously, as a “watchman” in this country, he made a statement in which he demanded that Russia after the Paris summit immediately “withdraw its troops and return the occupied part of Donbass to Ukraine”. He also emphasized that Washington will “support Ukraine and President Zelensky when he goes to these negotiations ...” Comments here, in my opinion, are completely superfluous.

Drive a wedge between Russia and Europe

Most likely, the United States taking an absolutely irreconcilable position and pushing Ukraine toward confrontation instead of reconciliation is largely due to Washington's problems in relations with its European allies, which were especially pronounced at the recent summit of the North Atlantic Alliance in London. The prospect of pacification of Kiev, especially, achieved with the active participation of France and Germany, is clearly not "smiling" at the White House and the State Department. Donald Trump in no way intends to forgive Macron "anti-NATO rebellion", and Merkel - "Nord Stream-2." “The two laurels of peacekeepers have dreamed about you ?!” Shish, and even without oil! ” - in my opinion, the American president thinks in approximately this vein. In any case, the fact that just before the talks in Europe scheduled for the beginning of next week, “suddenly” promptly began to “unwind” at once two “spy” scandals, which had a purely anti-Russian background, could not be a coincidence. And where?! Yes, just in Germany and in France. Coincidence? Have mercy! Such coincidences simply do not exist in nature. The assassination of the terrorist Zelimkhan Khangoshvili in Berlin was committed at the end of August, and so far his investigation has been proceeding in a completely civilized manner, without any policy. And "suddenly" - on you! The materials of the case are taken to the German Prosecutor General’s Office and its head immediately begins to broadcast about the “apparent Russian or Chechen trail” in this crime. Further more. The overwhelming Berlin declares two Russian diplomats persona non grata at once. What's next?

Incidentally, I wrote about the fact that Khangoshvili would be trying to “blind” the second Skripal, as well as that everything that happened looked like a special operation directed against Russia, exactly on the second day after the murder. Alas, I was not mistaken. The fact that the shot was put on the international wanted list by Georgia, where he also "marked" in full, now no one remembers. By the way, what is interesting, in the "promotion" of the delusional version of the "hand of Moscow", Deutsche Welle is especially zealous, already "awarded" official accusations of open interference in the internal affairs of our country. However, God bless him, with Berlin. There is at least a real corpse there ... With the “base of the Russian GRU’s fighters,” “suddenly” found in the heart of the French Alps, everything looks much worse. All this would be funny when it were not so vile. Well, you can’t work so clumsy! The “stuffing” from Le Monde was written clearly “on the knee”. And the source of inspiration for this “masterpiece”, such an impression, was the shabby volume of the “Aquarium” by Jude Rezun- “Suvorov”, which was fished out from the far corner of the bookshelf. I remember that there was something there about “the terrible Soviet spies from the GRU”, who were operating precisely in the Alps. Ashamed, monsieur, ashamed ... It smells of natural plagiarism. I undertake to assert this because the article in the French edition contains a phrase that completely crosses out all the nonsense contained in it about the "secret base of Russian spies." Not a single evidence, not a single one, not even the most stupid witness to the “Western intelligence services” could be obtained. A bear in a cap with earflaps with a red star, sitting in anticipation of a liaison from Moscow, broke its chain and disappeared in an unknown direction, dropping balalaikas with ciphers written on them along the alpine abysses. Shame ....

Washington is starting and ...?

Jokes are jokes, but neither the leaders of Russia, Germany and France, who are likely to gather in a few days in Paris, will definitely add any good mood or soulfulness in communication. The sediment, as they say, will remain in any case, and considerable. And then Zelensky with an invisible but very strong leash stretching towards his neck from across the ocean. You think the statement made the day before by US Deputy Secretary of Defense John Rood that "the White House in the draft budget for next year proposes to allocate at least $ 250 million to help Ukraine in the field of security and defense, including the provision of lethal weapons to it" Is this a coincidence again? It doesn't seem so to me either. Typically, such information is published on the eve of the official presentation of the financial plan. As a rule, in February-March. Why such a rush? In fact, there are few options. In this way they “cheer up” before the upcoming meeting in Paris so that its president, God forbid, would not heed the voice of reason during her. However, the matter is not only in Ukraine. The same John Rood, speaking the other day at a hearing on the US Senate Armed Forces Committee, made a statement stating that "the danger to the United States from Russia has increased significantly lately." This is already a message designed for purely domestic consumption. Alas, today there is nothing left but to admit: Washington’s new attack on our country is not just being prepared, it has already begun. Actions aimed at disrupting the “Norman” summit are only part of the “big game” in which the Americans are already making their first moves.

So, on December 5, the US Department of the Treasury announced the imposition of sanctions against the “Russian hacker group Evil Corp.” She is accused of "cyber attacks against American companies and government agencies." In fact, seven domestic companies and 17 individuals fell into the restrictive list. The most unpleasant thing is that the Ministry of Finance’s decision stubbornly raises the idea that “the group worked for the government and the FSB of Russia, which recruit cybercriminals for their evil purposes ...” So there can be no doubt - to be continued. However, what doubt can there be if, literally next week, the Senate Committee on Foreign Relations of the US Congress is determined to vote for the bill on new anti-Russian sanctions. For what?! As usual, “for the Kremlin’s interference in American elections and aggression against Ukraine.” In a word, for being Russian. The widest range of future restrictions is proposed - against banking institutions, against public debt ... And also, which is especially touching, "against Russian citizens and organizations engaged in illegal activities on direct or indirect instructions of Vladimir Putin." Well, with a great desire (and it certainly is!), Half of Russia can be brought under such a formulation. If not all. Most importantly, this time, gentlemen, the congressmen clearly aimed to strike at the very patient - the oil and gas industry. If the bill is passed, the punitive measures of the American Themis will fall on foreign equipment suppliers, of technologies and services for the Russian energy sector, as well as its lenders. Conceived seriously and on a large scale.

In light of all this, one should hardly expect any positive developments from the Paris summit. Most likely, Russia needs to get ready to solve the problems of the Donbass, and, above all, its own, without any regard to the "international community." In any case, as long as Washington is trying to get everyone in it.
Ctrl Enter
Noticed oshЫbku Highlight text and press. Ctrl + Enter
We are
"Norman format" as a way to "breed" Russia
Three reasons why signing the Steinmeier formula is empty
Reporterin Yandex News
Read Reporterin Google News
52 comments
Information
Dear reader, to leave comments on the publication, you must sign in.