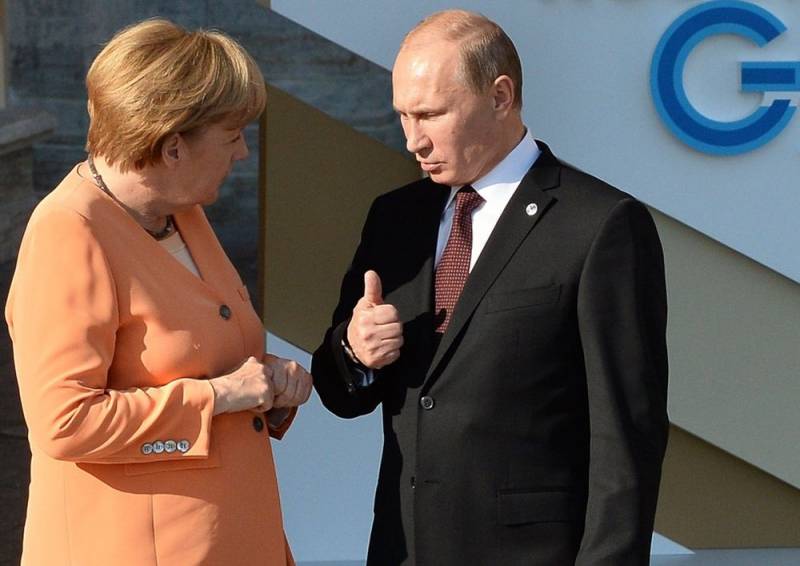 Recently it was reported that the murder in Berlin of a terrorist (gunman), an ethnic Georgian Chechen (Georgian citizen) Zelimkhan Hongishvili, could lead to problems in relations between Germany and Russia. After that, two employees of the Russian Embassy in Berlin were are announced persons non grata and there was talk of sanctions against Moscow. And so, the German political scientist Alexander Rahr commented on the relatively restrained reaction of the German media to this scandal.


According to the expert, the sluggish reaction of the German media about the "Khangoshvili case" and the expulsion of Russian diplomats is connected with the upcoming summit of the "Norman format". It should be held in Paris on December 9, 2019 with the participation of the leaders of Russia, Ukraine, France and Germany. That is, Berlin does not want to complicate relations with Moscow before this event.

The German media simply quoted Merkel's statement (regarding diplomats - ed.). It is rather difficult to analyze what happened, because no one knows who the killer of Zelimkhan Khangoshvili really is. Row politicians expressed doubts: why at the stage of investigation (when it is not clear where the killer's trail leads, perhaps just to some criminal structures) it was necessary to expel diplomats, why should relations with the Kremlin be spoiled?
- the expert specified the newspaper "Sight".

It should be recalled that German Chancellor Angela Merkel explained the expulsion of Russian diplomats by the fact that Russia did not support Germany in the investigation of this murder, committed on August 23, 2019. At the same time, some media outlets attempted to link the murder of Khangoshvili to "GRU spy actions."

According to the expert, the German leadership is objectively not interested in aggravating relations with Russia. Moreover, even those politicians who are critical of Moscow. So no one is going to disrupt the upcoming summit with some loud statement.

Now I think that Moscow will decide what the Germans need from Russia at the moment - and perhaps they will pass on any information about a Russian citizen who is in a German prison on charges of killing Khangoshvili. It is even possible that such an exchange of information will occur even before the meeting of the Quartet in Paris
- summed up Rar.

In turn, Russian Foreign Minister Sergei Lavrov has already stated that Berlin’s demands for Moscow to confess to involvement in the killing of Khangoshvili are unacceptable. This was announced by the head of the department in Bratislava (Slovakia) following the talks of the OSCE Council of Foreign Ministers.

Lavrov told how at a meeting some countries remembered the crash with Malaysian Boeing’s flight MH17 in the sky of Donbass, and the representative of the Netherlands said again that Moscow is not cooperating with an international investigation team. Lavrov emphasized that “no one called” Moscow to this group, but the facts that Russia provided in terms of quantity and quality “interrupt other contributions.”

But to the simple question “where is the data from the Ukrainian radars, where are the records of the Ukrainian dispatchers and where the satellite images of the United States promised for a long time?”, No one can answer us. And when we still ask them, what is the insufficiency of our cooperation, you know what the answer is? The answer is this: you must admit that you did it, this will be responsible cooperation with the investigation. If our German partners took this as a model, then, probably, we will not succeed with them. And, probably, you cannot talk like that with anyone, especially with the Russian Federation
- Lavrov told media representatives.

Lavrov added that law enforcement agencies in Russia and Germany have channels for communication, and it is these channels that need to be used. Moreover, Lavrov does not understand what the German partners' assessments about the “insufficiency” of cooperation are based on.
Reporterin Yandex News
Reporterin Yandex Zen
8 comments
Information
Dear reader, to leave comments on the publication, you must sign in.