Russia's return to the Balkans may end with new betrayals 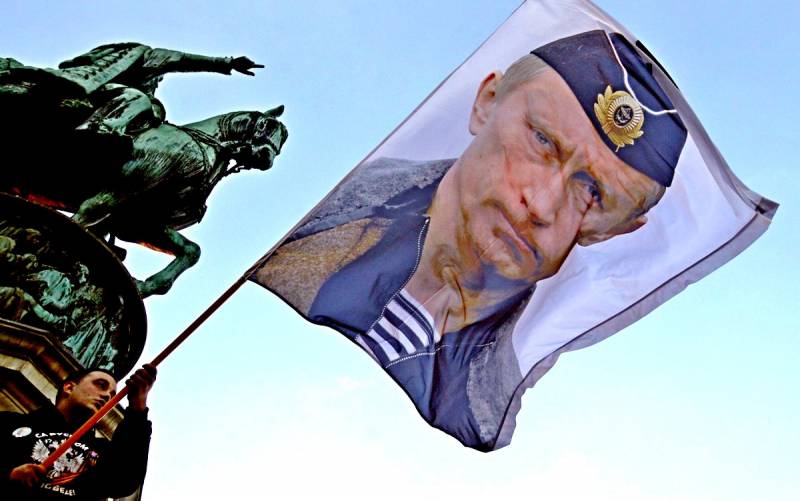 The harsh criticism voiced by the President of Russia Vladimir Putin against Bulgaria, in connection with the "deliberate delaying" of the construction work on the Turkish Stream gas pipeline on its territory, has good reason. Alas, certain Balkan countries, some of which gained statehood only thanks to Russia, used to use its intercession for centuries and for many years to be the broadest economic support, today they are in no hurry to pay for good with faithful and faithful friendship. And it is, unfortunately, not only about the Bulgarians ...

"Stream" and now there

It is hardly worthwhile to be surprised that, contrary to the agreements reached earlier, and, equally, to its own benefit and common sense, Bulgaria is constructing its own section of the pipeline carrying Russian “blue fuel” to Southern Europe. It would seem that there to build? The length of the "thread" that must pass through this country does not reach 500 kilometers. According to all preliminary estimates, its construction should have been completed long ago. But no ... What Bulgarian Prime Minister Boyko Borisov calls “mandatory procedures” that “delayed construction” is actually the most natural, sorry for the expression, mess that occurred when choosing a general contractor for the project. This story is not only scandalous, but also long, like a Mexican series, so there is no point in retelling it all. However, in a nutshell, the Arkad consortium from Saudi Arabia won the competition first, promising to complete the work at a fabulously low price. However, the Saudis either didn’t provide any papers by the agreed deadline, or they were fined with something else, and they were handed over to another consortium, with the loud name “Gas development and expansion in Bulgaria”. There were only people there — Germans, Italians, and even representatives of Luxembourg. Arkad was terribly offended and laughed at the Commission for the Protection of Competition, opponents responded with an appeal to the Supreme Administrative Court of the country. Porridge brewed - do not dissipate ...

It is not known how long the ongoing lawsuit would have lasted (the first hearings on the lawsuit should have begun no earlier than October) if the Europeans had suddenly not spat and refused claims to the contract, leaving the Arabs to deal with the “gas development of Bulgaria”. Still, Arkad will build the Balkan stream, however, they initially did not promise the "Stakhanov" pace. Now, in the conditions of “burning deadlines”, it seems that they are undertaking to lay the bulk of the gas pipeline (300 kilometers) for eight months. Well, what is it that they have enough gas in Riyadh, and winter is far from European. However, some analysts are inclined to believe that all the “mouse fuss” around the construction is nothing but a reflection of Sofia’s attempts to please the United States, desperate to block all possible routes to the Old World for Russian gas. Let me remind you: the South Stream gas pipeline, instead of which Turetsky is now under construction, was just buried by Bulgaria. Characteristically, this decision was made after the meeting of the then prime minister with American congressmen, who strictly “put on sight” Sofia for the “wrong” cooperation in the energy sector. The work by the Bulgarian side was suspended, and there the kayuk came over the whole project. Who exactly is responsible for this, the Bulgarians understand more than well. It was not without reason that Borisov, during his last year’s visit to Moscow, declared that he was grateful to Russia, "not holding evil for disrupting construction." And he added at the same time: "The elder always forgives."

"Brothers" with the owners in Washington

However, how much can you forgive? Moreover - the same thing. Vladimir Vladimirovich’s fears and doubts are understandable. At the end of November of this year, Boyko Borisov had already managed to visit Washington. Incidentally, this was Bulgaria’s first official visit of this level in seven years. In the White House, the prime minister was not talking about the weather. And progress on some issues that, judging by official information, were discussed by him with Donald Trump, is unlikely to contribute to the development of cooperation with our country. And let no one be misled by the words about the categorical impossibility of deploying a NATO naval base in Bulgaria, said to Boris journalists on board an airplane flying to Washington. The prime minister can arbitrarily declare that “the Black Sea is intended exclusively for sailing ships and tourism”, however, the ships of the Bulgarian Navy took a rather active part in the Alliance’s exercises held there this year. And the entrance to existing military facilities, such as the Novy Selo training ground and Graf Ignatievo, Sofia airbase, Sofia does not even think of closing the US Army. And how can you close it if the country is about to enter the orbit of the American military-industrial complex in the most serious way? The Bulgarians set out to buy F-16 Block 70 fighters in the United States. To pay for eight military vehicles, and, accordingly, ammunition and technical support to them, as well as training pilots, it is planned to allocate almost 1.7 billion dollars. By the way, for the far from wealthy Bulgaria, this will be the fulfillment of the demand of the same Trump to bring military spending to 2% of GDP.

And the cooperation between Sofia and Washington, which is growing and expanding before our eyes, is by no means limited to the exclusively defense sphere. Is it possible that they are so openly pulling in with the construction of the “Bulgarian Stream”, because the country's leadership is trying to sit not even on two, but immediately on three or four gas “chairs”? While work is underway on laying a route for gas from Russia to Europe, the construction of the Greece-Bulgaria interconnector is in full swing (the 180-kilometer gas pipeline Kamotini-Stara-Zagora). “Blue fuel” from the Middle East and the Caspian region should be transported through it. Sofia is also showing no less interest in gas supply projects to the Old World from the shelves of Cyprus and Israel. Well, and at the same time they talk about intentions to build another pipeline - along the Alexandroupolis-Burgas route. Through it, the Bulgarians intend to gain access to the supply of American LNG. Just in case, probably ... In principle, there is nothing wrong with trying, as is customary to say in Europe, to "diversify supplies." However, it’s completely nasty when all these movements hinder just our project, in which Sofia swore allegiance to Moscow more than once. However, with the "South Stream" at one time everything was exactly the same. At the same time, the United States is making the most active attempts to penetrate into all areas of Bulgarian energy. Borisov discussed with Trump, in particular, not only the supply of American fuel to the Kozloduy NPP, but also the ardent desire of the American corporation General Electric to participate in the construction of the new Belene nuclear power plant as fully as possible. At the same time, obviously, squeezing our Rosatom and the Chinese CNNC. Bulgaria’s dependence on the United States is steadily growing and this is an indisputable fact. Hence the problems with the gas pipeline.

Certain questions arise about the state, traditionally considered our main ally in the Balkans - Serbia. Claims against Bulgaria, by the way, were voiced by the leader of our state just during a joint press conference with Serbian President Alexander Vučić, who is visiting Russia. And all, it seems, is wonderful: the joint exercises of the air defense forces in Serbia recently were quite successful, Vučić himself penetrates and somewhere even pathos talks about the “wonderful military cooperation” between the two countries, thanks to him personally Putin and Shoigu ... But now What to do with his completely different speech, recently circulated by the Balkan Insight news agency? In it, the head of the Serbian state declares that there can be no more talk about any new arms purchases! In particular, he says that “after consulting with the Minister of Defense of Serbia Alexander Vulin and the Chief of the General Staff Milan Moysilovic,” he decided on “additional military reforms to make the army faster and stronger.” At the same time, Vucic argues, "we will even stop acquiring weapons," and we will strengthen the defense "in a reasonable way." It is not entirely clear what exactly this is about, but somehow it does not really harmonize with the declarations of the same sovereign husband in Sochi. Of course, we can assume that in this case we are dealing with an informational “stuffing” called upon to spoil relations between Moscow and Belgrade just on the eve of the presidential visit to Russia. However, the Balkan Insight, although it is considered by the media to be rather tendentious, with a clear pro-Western orientation, but has not been noticed so far on wild fakes, such as attributing to the head of state words that he did not say.

Moreover, such a position looks quite logical in the light of another event - the recent visit to Serbia by Deputy Assistant Secretary of State for Combating the Spread of Arms, Sanctions and Regional Issues, Thomas Zarzhecki. One of the most important official tasks of this official is precisely the organization of prosecution of participants in transactions with the military-industrial complex of Russia. And it’s hardly worth wondering why he paid a visit to Belgrade after an official statement made on November 1 by US special representative in the Western Balkans regarding the Washington’s “concern” about the deployment of “Russian military equipment” in Serbia. Palmer openly reminded Belgrade of "the possibility of sanctions for the acquisition of weapons from Moscow." Zarzhetsky, for sure, arrived to “straighten the brains” on the spot, and at the highest level. It is not surprising that almost yesterday Belgrade’s burning desire, declared publicly, to replenish its arsenals with the same S-400 Triumph air defense systems, after such a “collision” somewhat, let’s say, waned. In any case, Russian Deputy Prime Minister Yuri Borisov for some reason specifically specified at the end of the talks between the two presidents: the question of S-400 supplies there did not even arise. Again, do not forget that this year the Serbs made a rather strange “trick”, preferring the French Mistral 3 to our portable anti-aircraft missile systems. That happened exactly on the eve of the visit of Emmanuel Macron to Belgrade, whose Vucic subsequently, if anyone forgot, also declared "an ally in military-technical cooperation," of course, pure coincidence ...

Today, Serbia swears its most ardent devotion, and Alexander Vucic thanks Vladimir Putin and Russian friends for the smile on his face. Boyko Borisov declares Bulgaria “the only alternative for Russian gas” and invites Vladimir Vladimirovich personally to make sure that they are working tirelessly on the construction of the pipeline. Even if you smear it with bread, at least put it on the wound ... What allies will all these Balkan "brothers" be tomorrow? We will see ...
Ctrl Enter
Noticed oshЫbku Highlight text and press. Ctrl + Enter
We are
Ukraine from the inside: traitors, curators and those who watch from the Kremlin
Ten "defeats" of Putin
Reporterin Yandex News
Read Reporterin Google News
32 comments
Information
Dear reader, to leave comments on the publication, you must to register.
I have an account? Sign in