Only China is the winner: “The Power of Siberia” will hardly pay off in 30 years 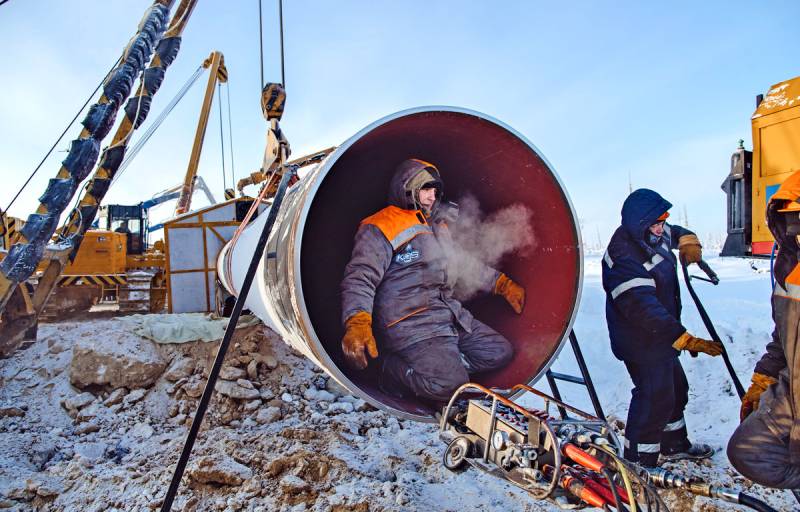 The other day there was a momentous event. In a festive atmosphere more reminiscent of the launch of the first starship, the Power of Siberia gas pipeline was launched. Since the contract for its construction was signed in 2014, after the "Crimean Spring" and Western sanctions, this project can be safely called a symbol of the Russian "turn to the East." Will the gas pipeline meet its expectations, and is it worth the wait for the Power of Siberia-2?


The Power of Siberia is the first gas pipeline from Russia to China, with a capacity of 38 billion cubic meters of gas per year. Construction took more than five years, its value increased from 800 billion rubles to 1.1 trillion. The sum of the 30-year gas supply contract was $ 400 billion. President Vladimir Putin said:

This step takes Russian-Chinese strategic cooperation in the energy sector to a qualitatively new level, brings us closer to solving the task set together with Chinese President Xi Jinping to bring bilateral trade to $ 2024 billion by 200.

Let’s try to honestly assess which of the partners will benefit from the pipeline, China or Russia, and whether it is worth posing the question in this way.

First of all, the “Power of Siberia” cannot be regarded as an instrument of pressure on Europe and Ukraine, no matter how much one would like. The resource base for it is the fields of Eastern Siberia - Chayandinskoye and Kovykta. At present, Russia does not have the opportunity to transfer gas from the European direction to the east in the event of a decrease in consumption, or even a complete abandonment of the EU by it. So what did Russia get?

At first, Gazprom gained access to the Chinese gas market with a guaranteed contract for the next three decades. The Russian pipeline will supply "blue fuel" to the north of China, where it has no serious competitors. LNG dominates on the coast of China, and Turkmen gas dominates in the west of the country. A year ago, Turkmenistan was not able to fully fulfill its obligations, which is why prices for LNG jumped sharply.

SecondlyThanks to the main pipeline, the process of gasification of Eastern Siberia and the Far East begins. For example, the Vostochny Cosmodrome and the adjacent infrastructure will be powered by the Power of Siberia. Due to the development of new fields, the Amur gas processing plant will be built, and a gas chemical one is also planned. This will close the country's domestic needs for gas chemistry products, as well as arrange its export.

ThirdlySuch a large-scale construction gave orders to enterprises of domestic metallurgy, manufacturers of gas compressor and other specialized equipment. Thousands of new jobs will appear at plants launched in the coming years, which will increase the attractiveness of the depressed Russian region. Along the way, appropriate infrastructure will develop, improving the quality of life of the local population.

These advantages are undoubted, but it is necessary to mention about the minuses.

From the moment the contract was signed, serious concerns have been raised about the price of gas for Beijing. The authorities hid it, which caused legitimate doubts about the commercial benefit of the contract, which could suffer because of political expediency. Recall that negotiations with the Chinese lasted for years, but triumphantly ended after a visit to China by Vladimir Putin, who proclaimed in 2014, against the backdrop of problems with the West, a "U-turn to the East."

Be that as it may, the terms of the contract were not the best, since the price in it was tied to oil quotes. Due to their fall, the cost of a thousand cubic meters of gas fell from $ 360 as of 2014 to the current 220-230. Therefore, some experts believe that the payback period of the project will be delayed, at best, until 2048. In addition, the Chinese “bailed” Russia by initiating a reform of the domestic gas market, which we told earlier. Beijing has gradually begun to move away from government tariffs in favor of floating prices. This step is openly directed against the “Power of Siberia”. Due to an oversupply of gas in China, prices for Gazprom will become even less profitable.

The most benefited from the Russian gas pipeline is still China, waging a trade war with the United States. Supplies needed for Chinese economics LNG going through the Strait of Malacca can be blocked by the American fleet, which is actively training there, allegedly, to fight with pirates. The blow will be serious, so Beijing in advance in 2014 and agreed to the construction of a "safety option" in the form of the "Force of Siberia".

It turns out that Russia has signed up to the fact that the next 30 years will be the “rear” for the PRC, but without any fantastic profit due to the seriously changing conditions for the worse. The question arises, why then negotiate the construction of the “Power of Siberia-2,” which will generally go to the region of China where it will encounter Turkmen gas? But the mega-construction, like the show, must go on.
Ctrl Enter
Noticed oshЫbku Highlight text and press. Ctrl + Enter
We are
Peace enforcement operation. Russia inflicts a preemptive strike on Kiev
U-turn costs Russia too expensive
Reporterin Yandex News
Read Reporterin Google News
Ad
The publication is looking for authors in the news and analytical departments. Requirements for applicants: literacy, responsibility, efficiency, inexhaustible creative energy, experience in copywriting or journalism, the ability to quickly analyze text and check facts, write concisely and interestingly on political and economic topics. The work is paid. Contact: [email protected]
61 comment
Information
Dear reader, to leave comments on the publication, you must sign in.