Western expert: it’s time for Putin to raise a glass after a break in NATO 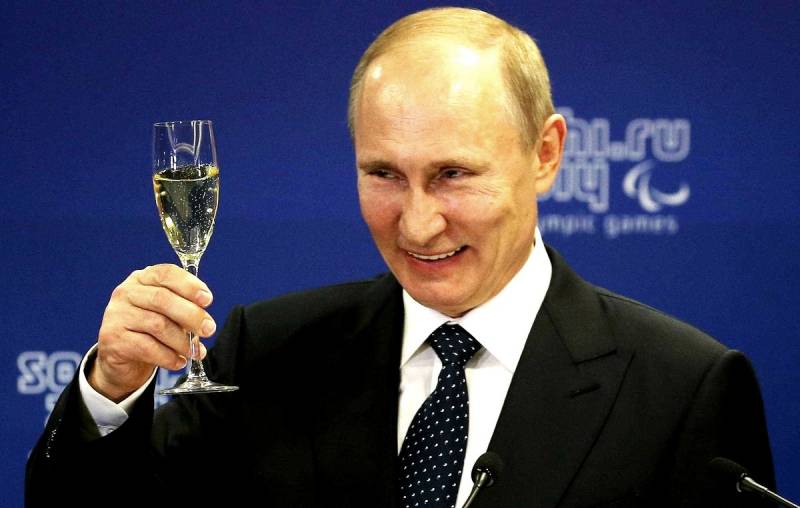 The NATO summit, which began its work in London, timed to coincide with the anniversary of the creation of this military-political bloc, looks like anything but the decorous and respectable assembly of the "big North Atlantic family", in which the Alliance has positioned itself for almost three quarters of a century. Like it or not, but in the current circumstances it looks much more like either a wake, or a forced stay in the same walls of "relatives" who cannot stand each other in spirit and are restraining themselves from the last forces so as not to break into another ugly squabble.


And the point here, of course, is not only in the “arts” of the French and Turkish presidents, who bring their comrades in the bloc to white-hot, albeit each in their own manner, and at the same time enthusiastically quarrel among themselves. NATO really approached its anniversary with baggage, in which there are far more problems than achievements.

Europe is getting out of hand

In fact, equality in the Alliance never smelled of anything written in its declarations. The United States and Great Britain, at the time of the creation of the bloc, declaring themselves victors in World War II and the main "mainstays of democracy" in the world, from the very beginning were "equal equal." Over time, the real "center of gravity" of NATO finally moved to the United States and, in truth, the Old World was more than satisfied with this. Relying on allies from across the ocean, seemingly ready to come to help at the first call, Europe began to slowly curtail its own defense programs and reduce armies. What for? But there are Americans ... After the collapse of the Soviet Union in 1991, the North Atlanticists finally relaxed. Fighting "in earnest" became, as it were, and with no one. NATO, contrary to the promises made by the last Soviet and first Russian leaders, continued to advance its borders to the East, absorbing the former "probable opponents" one by one. However, in the largest European countries that are members of the Alliance, more and more began to consider the costs of its maintenance as not too mandatory and useful expenses. In the end, everything came to what it came to: there is no one to serve in the Bundeswehr, and there is nothing to fly there with the Air Force. In Britain, in general, "beauty" - the army is shrinking, not a year, coming into an increasingly deplorable state. As a result, according to the Royal United Institute for Defense Research (RUSI), artillery is “completely disabled” and has no chance against the Russian, like all ground forces. The fleet of the former "mistress of the seas" is generally useless - only two dozen nuclear submarines have been written off from the 80s, without even the money to dispose of them. And at the same time - four frigates, two landing ships and a couple of aircraft carriers in addition. Now the Lords of the Admiralty are drying their heads: who would shake off the latter while it is still afloat?

How London will be twisted, about to decisively break with the European Union, is unknown. However, the EU itself took a deep thought to the fact that with pacifism, perhaps, there was a bust, as well as with faith in the "intercession" of the United States. Not so long ago, its representatives announced the launch of at least two dozen new defense projects exclusively of European level. The plan includes the development and creation of new fighters, combat helicopters, patrol corvettes, anti-submarine systems, and much more. And it is precisely such initiatives that Washington, which considers the Old World and, even more so, its own allies in the Alliance as a guaranteed market for its own weapons, is almost infuriating. The usual threats and “arm twisting” begin. Here are just such methods are completely worn out by Europeans. It is not without reason that French Defense Minister Florence Parley not so long ago directly accused the United States of "dictating and" imposing "its own weapons. French-speaking caustic reminded that NATO’s charter contains “article 5 - On collective defense, but no article F-35”, which states a collective obligation to throw billions on dubious products of the American defense industry. Moreover, this lady went in her sedition to the statement that "NATO will never be an instrument of European sovereignty." We should not forget that the contradictions mentioned above in the purely defense sphere have lately been superimposed on economic the problems caused by Washington’s desire to introduce draconian duties on French wines, then on German cars, or on all European exports in general. The "Allies", waging fierce "trade wars" among themselves, look, you see, quite wild. Is it any wonder then that in the same German Bundestag calls are often heard to send the Americans with their nuclear bombs to hell? Without them, it will be calmer ...

“The brain of NATO” - death or a split mind?

The statement made by Emmanuel Macron, which made Donald Trump “very dirty”, “tough” and “disrespectful”, which made a noise, is rightfully said. We will not argue about the "death", but the Alliance clearly has some problems with the "head". Take for example the question that is most pressing and important for us - the attitude of NATO towards Russia. If we analyze only official statements and only those that came from the mouth of the Secretary General of the organization, Jens Stoltenberg, then the picture is, frankly, depressing. It’s on France 24 that it proclaims our country “the main danger for the Alliance,” because it “has become assertive, invests in the creation of nuclear weapons” and supposedly “violates the INF Treaty”, then suddenly, in an interview on a completely different channel, it begins to talk about the need "A fruitful dialogue with Moscow on arms control issues." At the same time, the Secretary General calls our country not “the enemy”, but “the closest neighbor of NATO”, with whom one needs to “talk” and not provoke him, but, on the contrary, in every possible way to avoid conflicts. However, after the shortest time - again, great: all the same Stoltenberg begins to threaten Russia with a “comprehensive and immediate response" ... to its aggression against the Baltic states! According to the leader of the Alliance, concentrating their troops on the western borders of our country, the North Atlanticists “send her a signal”: just try to encroach! So what about the “dialogue” and the inadmissibility of provocations ?! No, by golly, not weak cognitive dissonance is obtained. And if you touch on the statements of other leaders ... For example, Emmanuel Macron at a brief briefing with Donald Trump said: "The enemy of NATO is terrorism, not Russia." The owner of the White House immediately assented him: yes, they say, they should "get along" with the Russians.

And at the same time, Lithuanian President Gitanas Nauseda announced the sidelines of the summit with lamentations that the refusal to “call Russia a threat to the entire world order” would certainly “significantly change the whole corner of NATO’s structure”. In, wrapped up! Interestingly, this fifth-angle seeker himself at least understood what he said? One gets the impression that the North Atlantic Alliance is indeed beginning to “fork” quite distinctly. The "fault line", of course, is not only the "Russian question", there are many controversial and painful moments. However, it is precisely the topic of confrontation with our country that has been breaking the bloc ever more recently. More than clearly, this can be seen in the example of the fact that this year Poland, Latvia, Lithuania and Estonia brought their own defense spending to 2% of GDP claimed by Donald Trump. Well, these will jump from the roof, if ordered from Washington ... Germany, France, other countries of Western Europe do not want to fight with Russia. They want to trade with her and, it is highly desirable, without any idiotic sanctions imposed from across the ocean. Spending huge amounts of money on the “reflection” of the “Russian threat” that someone had come across, brutally shredding their own budgets, which are really heavy (unlike the Baltic “superpowers”), is by no means torn. That in Paris, that in Berlin are sure: they do not need it. And they remember, besides, that it is useless ... Again, it is very easy to see a very clear division: just those who heat Russian gas do not want to see our country. Representatives of countries firmly determined to "sit down" on the export of American LNG to Europe are eager to "fight". That is, we again have completely clear and pragmatic motives from a purely economic field. In fact, the more intense and assertive the United States attempts to use NATO, primarily as an anti-Russian instrument, the higher the likelihood of its collapse (full or partial). As a purely military bloc, NATO is still more or less functional. True, here it is worth agreeing with Trump: the entire "military power" of the Alliance, in fact, lies in the US Army. But here's how political Union, the "North Atlantic Club" came to the brink of a deep systemic crisis.

The idea that December 4, "Vladimir Putin in Moscow will raise a glass for the deplorable state of the Alliance," expressed the American Karen Donfried, who in his homeland is the head of the German Marshall Fund. This expert believes that it’s unlikely that the “allies” who have become too different over the decades can agree on something dramatic in London. Most importantly, in the Kremlin, instead of gloating and perhaps prematurely commemorating the most likely potential adversary, they are more than realistic. The presidential spokesman Dmitry Peskov on this occasion noted that the "death of various parts of the body" of the Alliance - "this is not our question." Although Moscow intends to follow him "with great attention." It’s not without reason that Mr. Peskov noted that a military bloc “created under the ideology of confrontation” cannot exist in a different format by definition. However, in this case, the words of Vladimir Putin himself, who during the meeting on the state order for the needs of the Russian Navy, stressed that the Russian fleet needs to be modernized and strengthened precisely because of the "expansion of the NATO bloc near the borders of Russia, which is threatening its national security. ” So drink for peace, probably, until we wait. We will work ...
Ctrl Enter
Noticed oshЫbku Highlight text and press. Ctrl + Enter
We are
Ukraine from the inside: traitors, curators and those who watch from the Kremlin
Ten "defeats" of Putin
Reporterin Yandex News
Read Reporterin Google News
4 comments
Information
Dear reader, to leave comments on the publication, you must sign in.