Minsk’s turn to Moscow: a new maneuver or Lukashenko’s insight? 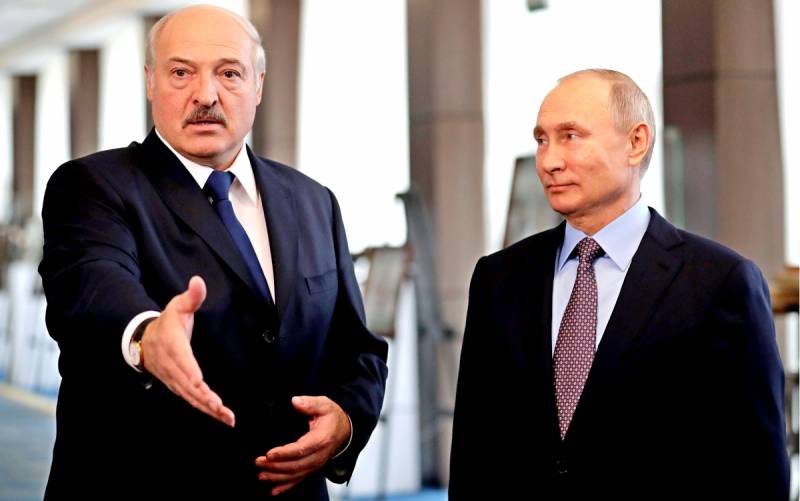 The recent statement by Vladimir Semashko, Ambassador of Belarus to Russia, was made, without exaggeration, sensationally for many both in the West and in our country. After Alexander Grigoryevich’s many attacks on Moscow, accusations of “constantly slipping new conditions”, “Nagibalov,” God knows what else - suddenly, words announcing a much more serious breakthrough in integration than even the most memorable optimists.


It is categorically impossible to suspect such a respected and high-ranking representative of Minsk in the "gag" in this case - not the country. Her ambassadors cannot categorically make such messages without coordination “at the very top”. However, doubts remain as to what we are dealing with: with Minsk’s next tricky maneuver in the game “it loves, dislikes, spits, kisses” for some time, or with the adoption of a conscious and final choice that should put an end to such dangerous "fun"?

The words of Semashko are completely unambiguous and do not allow double interpretation. The diplomat announces no less, but “grandiose goals”, the implementation of which really leads to deeper integration. It is not only about a single energy market, the unification of tax legislation, but also, according to some media reports, about the creation of "single authorities - parliament and government", with serious powers and managerial functions that will be delegated to them by both Minsk and Moscow. This is more than serious! The fact that these allegations are by no means unfounded, as well as an indication that at least 20 of the proposed 30 “roadmaps” on unification processes are already “absolutely agreed upon,” is also evidenced by the upcoming meeting of the prime ministers of the two states on December 6 . It has been officially confirmed by the Belarusian Council of Ministers, with the clarification that Dmitry Medvedev and Sergey Rumas are not going to drive teas, but will “work through the progress of the coordination of integration processes.”

It seems that the ice that began to form in relations between Belarus and Russia is rapidly melting, fortunately, still not reaching the level of polar hummocks ... Of course, this is far from all.

As one would expect, in Ukraine this news perceived very painfully. Some of the especially anti-Russian concerned local mass media stated with some fright that “the situation in Minsk is extremely tense and resembles the events in Kiev six years ago.” At the same time, a certain “Belarusian oppositionist” Pavel Sevyarynets is quoted who immediately accused Alexander Lukashenko of “selling the country” and urged Belarusians to enter a “mass protest to defend independence” on December 7. Despite the ambiguity of relations between our countries that has taken place recently, today's realities are such that, taking into account them, the anti-Russian “Maidan” in Minsk could be “born” exclusively in the inflamed brains of Russophobes from Kiev. I will disappoint them: according to recently released data from a public opinion poll conducted by experts from one of the analytical centers of the Institute of International Relations at MGIMO, about 60% of Belarusians see its future exclusively in close alliance with Russia. More than 30% believe that relations between countries should be “partnership”. A little more than 10% of respondents spoke for "neutrality." And the adherents of “hostility” with our country gained even 0.2%. With such chances, Maidan is not even worth starting. Money down the drain ...

With all the unimaginable “twists and turns” of official Minsk recently, from which extremely incorrect statements began to sound from time to time, on the verge of foul statements, such as “alien wars” and the like, the people of Belarus were not brought close to the point of fooling at which anti-Russian ideas were perceived Someone of the population. And if Alexander Grigoryevich in time understood what the future movement would be fraught with in the direction he had chosen from a certain moment, then this only confirms his reputation as a very far-sighted and experienced policy. However, help was rendered to him simply invaluable. And just those who sleep and see Belarus as the second Ukraine. In the main "incubator of color revolutions", Washington, recently, its problems have been taken care of simply to the extreme. Relevant events follow literally one after the other. Before the Helsinki Commission of the US Congress, the hearings on the issue of “Russian intervention in Belarusian affairs”, which were actually something like a seminar on the topic “How to arrange a coup in Minsk in the shortest possible time,” as the Jamestown Foundation is in a hurry to hold, a forum on the topic of “resetting” relations between Belarus and the Western World. What is characteristic, the Belarusians ’search for« their national identity ’for some reason tightly linked them to the seemingly« rapprochement ’of the country with the United States.

Belarus without Russia. But even without Lukashenko ...

The main thing, however, is not this. All the fuss mentioned above rose in Washington for a reason, and on the threshold of a decisive stage in the integration process of Minsk and Moscow. However, even at this moment, the American "partners" do not find the strength to at least portray minimal tolerance for the "disgusting authoritarian regime of Lukashenko." Yes, yes, that’s what the current Belarusian authorities called Brian Whitmore, who participated in the Helsinki Committee’s hearings, who represented the Center for the Analysis of European Politics (CEPA) there, an organization that is extremely Russophobic and quite serious in status and level. The rest of the participants in the “discussion”, “experts” and the speakers of this event, by the way, were representatives of the Belarusian “opposition”, who had long and firmly settled in the West and were conducting open subversive activities against the “former homeland” from there. And, of course, without a doubt dreaming of overthrowing Lukashenko. And, by the way, one of the main recommendations developed at this extremely dubious "forum" was the statement about the need for a significant increase in funding and support for "civil society" and "non-governmental organizations" in Belarus. But from this to the "Maidan" it’s just half a step. And the intentions announced by Washington about a sharp increase in Minsk’s own diplomatic presence against this background also look, let's say, somewhat ominous - especially for its current leader.

At the Jamestown Foundation hearings, the same CEPA was no longer represented by the talker Whitmore, but ex-commander of the US armed forces in Europe Ben Hodges. He, we must pay tribute, was frankly military. Without completely hiding the true reasons for the United States’ concern over the “independence of Belarus from Russia,” the retired general complained about the “impassability” of the sky of this country for the US Air Force. He was just as cynical and concluding his speech with the words that “he is addressing the country in which the United States is interested, and not to Lukashenko, who no longer matters.” The deputy foreign minister of Belarus Oleg Kravchenko, who was present in the hall, was unlikely to caress these words. He even tried to object in the spirit that “relations between Minsk and Moscow are their internal affair.” Who would begin to listen to him in Washington ... But Alexander Grigoryevich, most likely, completely unambiguous hints that were heard in his address in the American capital. And appreciated them, making an appropriate decision. And, on the other hand, what did he get during his recent recent “breakthrough to the West”? Investments? Lending? An invitation to any international structures that promise Belarus real development prospects? Nothing at all ... However, no. Swedish Foreign Minister Anne Linde recently said that her country will now use the name Belarus, and not the former Vitryssland, in official communication with Belarus. According to the diplomat, this is nothing more than “recognition of the Belarusian civil society”, as well as “reverence towards those who“ have long wanted to emphasize the national identity and sovereignty of their country ”. From this, of course, all Belarusians will begin to live better and more fun. The main thing is fuller and richer ...

Be that as it may, Lukashenko, above all, has always been a pragmatist. Well, lately, realism has begun to fail him. It happens ... However, one does not need to see and not understand that the West and the United States - first of all, in any capacity other than a military bridgehead in confronting Russia, Belarus does not need it. And the fact that with him at the head it is categorically unacceptable for the "collective West", and even more so. Talking about “diversification” and oil purchases across the ocean is one thing. That's just real economy - this is completely different. And for Minsk without Russia at the present stage, it is simply impossible. Vaughn, director of the Geoinformation Systems Unitary Enterprise of the Belarusian National Academy of Sciences Sergei Zolotoy recently said that the joint Russian-Belarusian constellation of Earth remote sensing satellites is on the verge of breaking. Belarusian satellites will launch our rockets into orbit. These are real prospects. This is the future. No wonder the West is ready to go to any tricks in order to prevent the union of our countries - it can change the geopolitical “alignment” too much, and not in any way in favor of our “well-wishers”. I would like to believe that in Minsk they all understand this no less clearly than in Moscow, and the decisions that will be made soon will become final and are not subject to any “appeal”.
Ctrl Enter
Noticed oshЫbku Highlight text and press. Ctrl + Enter
We are
How Ukraine break Putin's plan: six tips Zelensky
Ten "defeats" of Putin
Reporterin Yandex News
Read Reporterin Google News
20 comments
Information
Dear reader, to leave comments on the publication, you must sign in.