A tourist bus flew off a bridge in Transbaikalia: dozens of dead 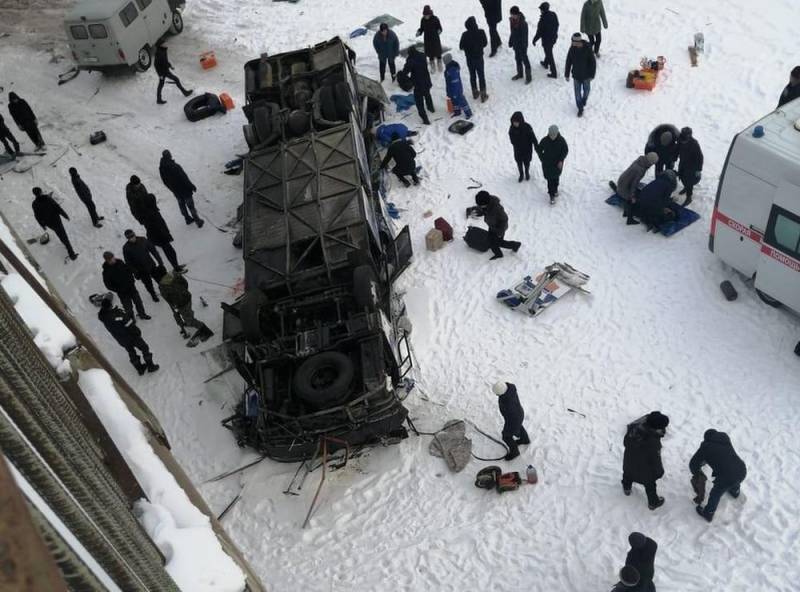 On December 1, 2019, in the Sretensky district of the Transbaikal Territory, near Kuenga station, the KIA Grandbird tourist bus, moving from Chita to Sretensk, crashed from a bridge onto the ice of the Kuenga River. There were 44 people on the bus (43 passengers and 1 driver).

The cause of the incident is the broken front wheel of the bus. The rescue operation is complicated by the fact that the bus lies on ice and heavy machinery it is simply impossible to fit, as it, together with the bus, may fall under the ice.

The Governor of the Trans-Baikal Territory Alexander Osipov has already flown to the scene of the tragedy in a second helicopter, together with the Minister of Health of the region Valery Kozhevnikov. The Investigative Committee of Russia (TFR) opened a criminal case under part 3 of article 238 of the Criminal Code of the Russian Federation ("The provision of services that do not meet safety requirements, resulting in the death of two or more people"). According to preliminary data, the bus belongs to an individual entrepreneur (IP), which is engaged in tourist transportation. The Main Directorate of the Ministry of Emergencies for the Trans-Baikal Territory opened a hotline by calling 8 (3022) 356161.
Ctrl Enter
Noticed oshЫbku Highlight text and press. Ctrl + Enter
We are
Bus with tourists from Russia rolled over in Italy
The head of Transbaikalia burst into tears, talking with her mother with many children
Reporterin Yandex News
Read Reporterin Google News
Ad
The publication is looking for authors in the news and analytical departments. Requirements for applicants: literacy, responsibility, efficiency, inexhaustible creative energy, experience in copywriting or journalism, the ability to quickly analyze text and check facts, write concisely and interestingly on political and economic topics. The work is paid. Contact: [email protected]
6 comments
Information
Dear reader, to leave comments on the publication, you must to register.
I have an account? Sign in